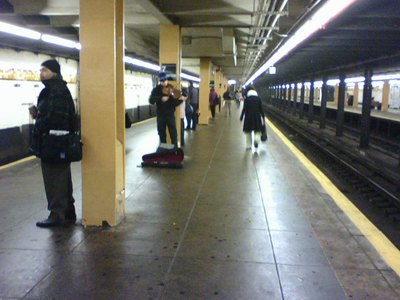 I took this picture this morning at the 7th Avenue F train stop in Brooklyn, a favorite of "street musicians" because of it's resonant acoustics. This violinist was playing a Bach partita when I arrived, and maybe I was just in a particularly good mood today, but it was just about the most beautiful thing I've heard outside a concert hall (and better than a lot of things I've heard inside one.) Well worth a donation if you happen to see him in your station some morning. 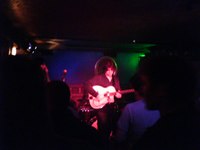 Great time at Union Hall last night - I got there around 9, and was happy to see my friend Simon and his girlfriend Jenny, who'd made the trek out from Manhattan. (They found out about it from the Times online, where Simon works.) Simon went to Tulane, and isn't easily impressed when it comes to Mardi Gras festivities. But, this one seemed to fit the bill.

"This is what it's actually like in New Orleans," he said. "Crazy, chaotic, crowded, with great music, great food and just a whole lot of fun."

The place was packed with well over 200 people to see the Hungry March Band, the M Shanghai String Band and the Pontani Sisters, who did their trademark burlesque. I stayed late, and was treated to an extraordinary set in the basement space by French guitarist Stephane Wrembel and his band. Wrembel's playing aspires to that of the famous French gypsy Django Rheinhardt, and very often succeeds. If you missed it, you can catch him just about every Sunday at 9pm at  Barbes. 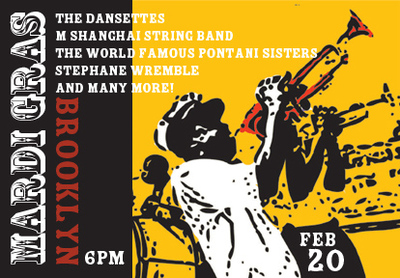 Not too many choices for live music this Mardi Gras, but this event tonight at Union Hall in Brooklyn - which will benefit musicians of New Orleans - should be killer. $12 gets you in, and there will be cajun food from the excellent NoNo Kitchen.