Where I Hang My Hat 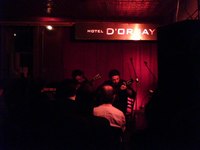 Barbes just keeps cranking out the aural magic. On Sunday night, I stopped by the back room by for the monthly Barbes Classical night, presented by the Concert Artists Guild. This month's installment featured the Brazil Guitar Duo, comprised of Sao Paolo natives João Luiz and Douglas Lora, performing classical and traditional works with quiet intensity and awesome ability. Currently on a North American tour, they'll be back in NYC at the Miller Theater on April 14, performing on a program of pocket concertos with the Perspectives Ensemble. 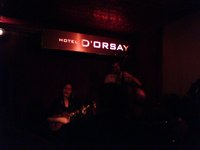 Last night, Marta Topferova, who I've written about previously, returned and charmed the crowd with her exotic mix of Latin and Czech songs. She performed with an amazing group of backing musicians, matching Topferova's own excellent Cuatro playing. I saw her smiling throughout, almost as if she was in an uncontrollable state of ecstasy. Believe she, she wasn't the only one.

As for this weekend, I'll be at Carnegie tomorrow to catch the St. Louis Symphony performing Mahler, Ravel and Adams. (The concert was to have featured the premiere of Adams' Doctor Atomic Symphony, but Adams reportedly underestimated the amount of work involved, and so the SLSO will instead offer his Harmonielehehre.) On Sunday morning, I'll be at the 92nd Street Y to hear Alex Ross speak about Debussy and Schoenberg, and maybe offer an excerpt or two from his as-yet-unpublished The Rest Is Noise. Tickets are $37 and include brunch, but if you're 35 or under, you can get in for $10 (w/o the brunch, though.) I really wanted last night's concert at Carnegie to be better than it was. And, on paper, it looked like it would be: the North German Radio (NDR) Symphony of Hamburg, Germany, led by it's esteemed chief conductor Christoph von Dohnanyi, the former music director of the Cleveland Orchestra.

The program started well, with an unsettling performance of Ligeti's Lontano for large orchestra. (For those who think I might be a bit biased about Ligeti's music - guilty as charged.) The performance had an added poignancy, given that Ligeti lived and taught in Hamburg for nearly 20 years, and surely had a relationship with many of these players.

Bizarrely, the next piece on the program was Mendelssohn's 2nd Violin Concerto in E minor, with Russian Vadim Repin as soloist. The performance was capable, but Mendelssohn after Ligeti? Depending on your point of view, it either makes the former sound like bathwater, or the latter a bitter pill. When are music directors going to stop trying to please everybody and realize that a program like this alienates just about everyone? I would have much rather heard Alfred Schnittke's brilliant Violin Concerto No. 4 (1984), which Repin played with the orchestra on Monday night. I'm sure the thought of putting Ligeti and Schnittke on the same program is anathema to most orchestra directors, but a little courage goes a long way in today's fractured concert scene.

I moved downstairs for Gustav Mahler's 1st symphony, hoping to experience the same revelation I had when I heard the Leipzig Gewandhaus play Mahler's 5th three weeks ago. Sadly, neither the conductor nor the orchestra were up to the task: the playing was often fuzzy and uneven, and Dohnanyi - who is 78 and less than spry - appeared lost in his own world at times. The First may have been programmed because it's a tried-and-true crowdpleaser, with it's blazing fanfare in the final movement. But, it is a young man's symphony (Mahler wrote it when he was 28), and requires a youthful approach from whoever's leading the charge.

I left the concert wondering to myself why Mahler's First keeps getting programmed when he wrote eight (nine, depending on who you talk to) symphonies far superior to this one. After all, how often do you hear Beethoven's First symphony? Or Bruckner's? Or Schubert's? And then, I remembered my visit to the New York Philharmonic archives two weeks ago, when I had the chance to review a facsimile of the last score Mahler used when he conducted the Philharmonic in 1911. It was his own First Symphony. Mahler may have been the great symphonic composer of the century, but he made his money as a conductor, working at the pleasure of his board of directors, who were more interested in receipts than artistic advancement. Some things never change, I guess. 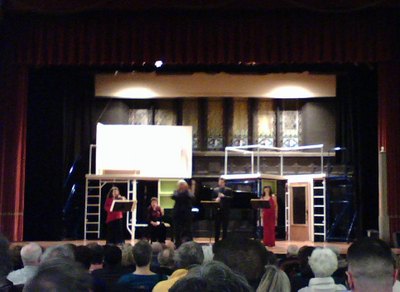 Local new music ensemble Continuum says that their name comes from their belief that new music and old form an unbroken tradition. They demonstrated this belief last night at the Peoples' Symphony, with a wide ranging program that featured composers from Latin America, Europe and the U.S., mostly written in the past 25 years.

Continuum has been a frequent guest of the PSC over the years, despite the fact that the hall was noticeably less full than at other concerts this season - a testament to series director Frank Solomon's commitment to new music. What struck me was the group's longevity: Continuum was founded in 1966 by Joel Sachs and Cheryl Seltzer, and both still perform actively with the group. To me, it was strange to see septuagenarians playing music that so often seems to be the exclusive province of the young. Whatever last night lacked in the freewheeling, rock-and-roll style of today's new music concerts, it more than made up in ability and seriousness of presentation. Continuum obviously believes that this music belongs on the same stage as Beethoven and Brahms, and that it's only the prism of time that separates them. (I wouldn't necessarily agree, but I admire their conviction.)

The crowd favorite last night was Francis Schwartz's theatrical "Daimon II" (1986), which featured exuberant gestures and audience participation: at one point, Sachs had us all stomping our feet in unison. When it ended, I saw several in the crowd rise to their feet in applause, an honor I haven't even seen the Juilliard Quartet receive at these concerts.

The final concert in the People's Symphony Chamber Series will be on April 14, with pianist Richard Goode playing music by Mozart, Brahms and Debussy. Sure to be a sellout; call soon if you want tickets.