I only caught the second half of Tuesday's MATA Festival, so I'll leave it to Steve Smith to recap the proceedings. (Pictures courtesy of the Times.) My personal fave was Daniel Koontz’s “12 Improvements for Piano,” a rollicking set of variations performed by the Australian Simon Docking, for whom they were written. To my ears, they were on a par with Gyorgy Ligeti's notoriously difficult Etudes.

The festival concludes tomorrow night at the Lyceum with performances by Matthew Barnson, Andrew Norman, Filippo Perocco and Christopher Tignor, as well as special guest composers Osvaldo Golijov and MATA Festival Director James Matheson. Well worth your while if you're in the nabe. 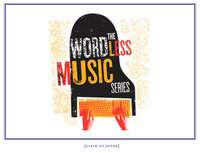 Tomorrow night, the Wordless Music Series will be at the Good- Shepherd Faith Church near Lincoln Center with an intriguing program featuring all-Canadian musicians. Wordless Music is devoted to breaking down the boundaries between rock, jazz, new, "classical", and other forms of instrumental music, and in the past has featured such well known musicians as Glenn Kotche and Nels Cline from the rock band Wilco, and Josh Quillen from local new music group So Percussion (who are also performing tomorrow night at the Miller Theater, playing Steve Reich's Music for 18 Musicians; catch them on Saturday instead.)

Tomorrow's Wordless Music program includes rock, electronic and new music, and features Terry Riley's minimalist classic In C, and Louis Andriessen's Worker's Union. Tickets are $15, and include a one hour reception beforehand at 6:30. There will be three more concerts after this one, so if you've already got your Miller tix, go catch them another time.

Today's Times has a story by Vivien Schweitzer about Paul Jacobs, the 30 year old chairman of Juilliard's organ program who, in his early 20's, performed marathon concerts of the complete works of Bach and Messiaen. He has some interesting things to say about the organ's forgotten place in music, as well as the general state of American culture.

"Ours is a culture that wants everything to be easily digestible, but to fully appreciate a Bach fugue, you have to be able to hear contrapuntally, and this takes work. I’m tired of a culture that devalues music and has no desire to understand it more intimately. And the void has been filled by parasites in the entertainment industry.” (referring specifically to shows like American Idol)

He also points out that New York is the only U.S. city with a major orchestra not to have an organ in it's concert hall. (Make that two concert halls.) If you'd like to hear more, Jacobs will be giving free daytime talks tomorrow and on April 9 at Juilliard.

Also, a reminder that the MATA Festival kicks off tonight at the Brooklyn Lyceum at 8p. Feel free to stop by and say hello: I'll be the one taking notes in the back.

A Night to Remember 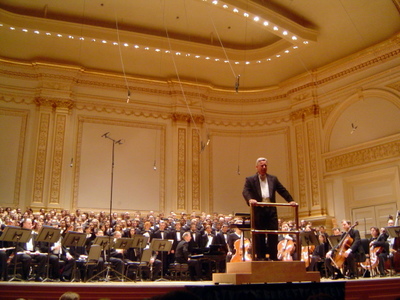 Though the hall was less than half full, anyone who was at Carnegie last night enjoyed an unforgettable experience. I take back what I wrote yesterday: there is a difference between high school and adult choirs, and it's one that the Viennese and Anglicans have known for at least 600 years. Young voices have a more pure tone, a more silken texture than mature voices, and their sound filled the Isaac Stern Auditorium last night with an incandescent glow. Close your eyes, and you might have imagined you were sitting in a great Gothic cathedral.

After a taped audition in which dozens of high schools submitted entries nearly a year ago, four choirs were chosen to participate in last night's concert. All traveled a great distance to be here this week: two were from Arizona, one was from Arkansas, and another from Idaho. One can only imagine how many parents spent money they didn't have to give their kids the chance to realize the dream of a lifetime: the opportunity to sing on the stage of Carnegie Hall with a professional orchestra, under one of the leading choral directors of our time, Craig Jessop of the Mormon Tabernacle Choir. It is a privilege we New Yorkers take too far for granted.

The first half of the program featured each of the four choirs singing a capella or piano arrangements of various hymns and songs, conducted by their regular choral directors. The selections ranged from Jan Sweelink's 1626 setting of Psalm 96, to the Latin hymn Lux Aurumque, written in 2000 by 36 year old Eric Whitacre. I felt a bit uneasy when the Bentonville High School Chamber Choir - a public high school - chose to perform a rousing Gospel song called Worthy to Be Praised, but it got by far the biggest ovation of the night.

After the intermission, the combined choirs - over 200 singers in all - were joined by the Orchestra of St. Luke's for Stravinsky's Symphony of Psalms and Poulenc's Gloria. Dr. Jessop paused to say a few words beforehand, reminding us that these works were challenging for an adult choir to pull off, much less high school students. (He also informed us that Stravinsky's preference was for the soprano and mezzo parts to be sung by girls because of their "innocent quality," but in practice, this is the exception far more than the rule.)

Throughout the performance of both pieces, I could see Jessop giving subtle thumbs-up to the choir, encouraging them along. In the Gloria, the choir was joined by the talented British soprano Nicole Cabell, who made her Covent Garden debut this season and is engaged to sing at the Met in upcoming seasons. Her voice had a dark radiance, effectively penetrating the huge sound projecting from behind her.

After the music ended, Jessop brought out all the individual choral directors to share in the huge standing ovation, a moment they seemed to cherish even more than the kids, who will likely have to wait to tell their grandchildren to realize just how magical last night was. 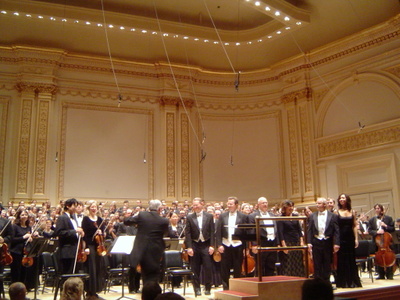