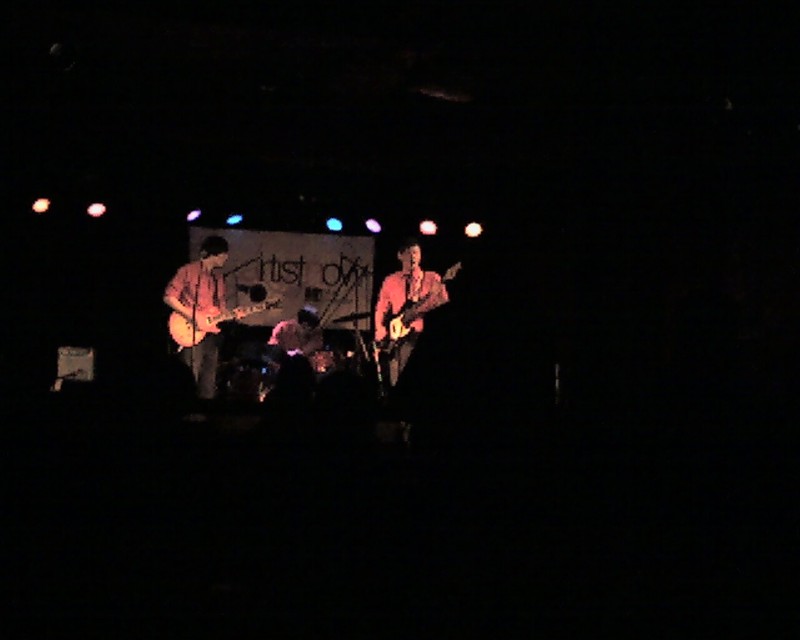 Out tonight at local hang Southpaw, a free show sponsored by AM New York. Mostly not worth mentioning, but one band - The Attorneys - plays with confidence and presence, if slightly lacking in subtlety.  All in all, not a bad way to spend a Thursday in Brooklyn. Last night, Alice Tully Hall was double-marked by a sense of passing. On the one hand, the Vermeer Quartet, the excellent Chicago-based ensemble that has played together for nearly 40 years, was performing it's final New York concert, as guest of the Chamber Music Society of Lincoln Center. On top of that, Alice Tully Hall will be closing for major renovations next week, after a near-forty-year run of her own. The hall - which seats over 1,000 - is getting a dramatic facelift  from Diller Scofidio + Renfro, the NYC firm that recently built Boston's new Institute of Contemporary Art, to rave reviews. Plans are for the new ATH to re-open in time for the 2008-09 season.

For this final concert, the Vermeer admirably selected a program of some of their favorite, yet less well-known string quartets. They began with Franz Schubert's early Quartet in E-Flat, written when he was only 16. It mostly resembled Mozart in scope and feel, but the final Allegro sounded like the start of something new, looking ahead to such future masterpieces as his "Death and the Maiden."

The following selection, Benjamin Britten's Third Quartet, was about as different from Schubert as you could get. Written at the end of Britten's life, it is a haunting masterwork: alternately brooding and playful, like a mysterious dance towards death. The visionary final movement was a slow, steady progression, almost hypnotic in its repetition. After fleeting moments of rapture, the music finally faded away to an uncomfortable close.

Following intermission, the Vermeer closed with Antonin Dvorak's Quartet in E-Flat, Op. 51, a mid-career work filled with Slavic folk rhythms and sunny melodies. The quartet played with a lightness and elegance that sent the music floating high above the audience. 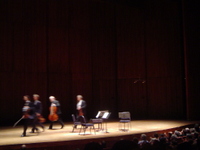 After a rousing standing ovation, the Vermeer returned for one final encore: the Zingarese from Haydn's Quartet Op. 20, No. 4: a perfect  little confection to send everyone away with a smile, however bittersweet.

The final ATH performance before closing for the renovation will be a gala next Monday, April 30, featuring Philip Glass, Laurie Anderson, Wynton Marsalis, the CMS, and the Juilliard Orchestra. If you can't make it to the hall (or don't want to spring for one of the benefit tix), the concert will be broadcast on PBS on May 3. 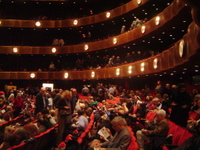 I was persuaded to take time out from a busy week at work to attend City Opera's Wednesday night performance of Madam Butterfly by two primary factors. One, was that as a "Big Deal" subscriber - City Opera's new program for patrons under 40 - I was able to purchase a prime orchestra seat for only $30 (normally $115.) The other was an invitation to a free cocktail party afterward on the Grand Promenade - and after the week I've had, I could use a drink.

The production, by Mark Lamos, has been a staple of City Opera's repertory for several seasons, but has been naturally overshadowed this year by the Met's universally acclaimed new production from earlier this season, directed by Anthony Minghella. Having seen them both now, it is probably unfair to compare the two, given the Met's vastly larger resources for costumes, sets and singers (not to mention whatever it cost to project the opening night performance of Butterfly in Times Square.)

But there are certain basic standards that a professional opera company should be expected to adhere to, and while the orchestra sounded fine and the production was generally engaging, several performances did not make the grade. In particular, Christopher Jackson, who sang the role of Pinkerton, was often drowned out  by the orchestra, and his top notes were all but inaudible. Moreover, he was awkward and unconvincing as the American sailor who enters into an arranged marriage with a young Japanese girl while on station in Nagasaki. There were also issues with the set design, with several singers tripping over the huge parachute-like fabric used to cover the stairs in Act II. 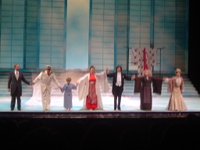 Fortunately, the evening was salvaged by Shu-Ying Li, who was a revelation as Pinkerton's betrothed, Cio-Cio-San. A native of China, Li threw herself into the role fearlessly, her voice soaring over the orchestra. She also was riveting dramatically, full of defiance and rage at her abandonment by Pinkerton. During the curtain calls, Li received a well-deserved standing ovation. Also excellent was Florida native Keri Alkema, who was making her City Opera debut as Cio-Cio-San's handmaiden Suzuki.

The sizeable crowd was diverse in age and background, with many dressed to the nines for the occasion. I even noticed several girls in kimonos and sandals. Butterfly is a real winner of an opera, with powerful music and recognizable American themes: Puccini quotes The Star Spangled Banner more than once in his score, and Lamos emphasized the point by putting U.S. Flag streamers in Cio-Cio-San's hair. Just the sort of thing that'll keep the kids coming back for more. 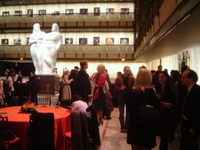 At the cocktail party afterward, I spoke to some City Opera staffers about putting on opera literally in the shadow of the Met. They reminded me that many of the Met's recent successes were initiated by City Opera and their departing General and Artistic Director, Paul Kellogg. Besides Butterfly, these include: performances of Handel operas; Bartlet Sher, who directed this season's Barber of Seville; and Rolando Villazon, who got his big break as Rodolfo in City Opera's production of Puccini's La Boheme. I also learned about some of the exciting new productions coming up next season, including Samuel Barber's Vanessa, with the dramatic soprano Lauren Flanigan singing the title role, and Richard Danielpour's new opera Margaret Garner, which features a libretto by Toni Morrison. And, they told me that Gerard Mortier, who is set to take over City Opera in 2008, is already flying over from Paris once a month on an advisory basis. "He's very nice," they said. "He brings us French chocolates." Margaret Garner was originally workshopped as part of VOX, City Opera's innovative development program for new American opera. On May 12-13 at NYU's Skirball Center, there will be panel discussions and staged performances of excerpts from twelve innovative new works by both established and emerging composers, including a performance of John Zorn’s “La Machine de l’être”. Admission is free. 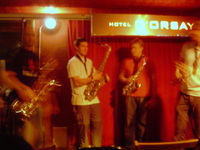 Not really sure what to expect from a group made up entirely of saxophones, I braved the Nor'easter and wandered down to Barbes Classical last night to catch Amsterdam's Amstel Quartet, two days shy of their Carnegie Hall debut. What and I and about a dozen others discovered was a thoroughly accomplished ensemble, playing with a polished, restrained tone - a far cry from the wild abandon of the jazz musicians who usually inhabit these instruments. A scan of the Amstel's well-designed website reveals a remarkably deep and diverse repertoire, including everything from 16th century Dutch composer Jan Sweelinck, to such modern masters as Ligeti, Glass and Gubaidulina.

The first piece I heard was Alexander Glazunov's Saxophone Quartet, written late in the famed Russian composer's life after he'd moved to Paris and discovered the harmonic possibilities of the instrument, particularly the combination of soprano, alto, tenor and baritone saxes. According to Amstel, it is considered the masterpiece of the repertoire, sprawling over three movements of considerable range and complexity. Impressively, they played from memory, signaling each other with silent gestures.

Before playing Sweelinck's Toccata in A, tenor Bas Apswoude asked us if we knew the names of any other Dutch composers.

"Other than Tiesto," he said.

A far cry from Trance music, the Toccata - which, like Bach's Art of the Fugue wasn't scored for any particular instruments - resonated like a Baroque organ, and it wasn't hard to picture the saxes as pipes in an old wooden choir loft.

They ended with transporting transcriptions of Michael Nyman (from The Piano) and Philip Glass (his String Quartet No. 3, Mishima.) Both had a hypnotic beauty, even though I've heard each of them countless times on CD.

As I mentioned earlier, the Amstel will be performing one final concert at Weill Recital Hall tomorrow night before returning home to Amsterdam. Tickets are $20. They return in August and October, dates TBD.