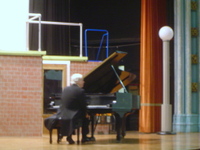 Speaking of the rat race, I got caught up in it myself last night, waiting over an hour at the Verizon Wireless store on Union Square for a replacement phone, causing me to miss nearly the entire first half of Richard Goode's concert at the People's Symphony. And, to think I didn't even own a cell phone until 2005...(sigh)

At least what I did hear was mesmerizingly good. Goode is one of the great pianists of our time, and as co-artistic director of the famed Marlboro Music Festival with Mitsuko Uchida, he is also one of our most valued educators. (People's Symphony manager Frank Solomon is also the administrator at Marlboro.) As a protegee of Rudolf Serkin, he is especially known for his interpretations of Mozart and Beethoven, and was the first American pianist to record the complete cycle of Beethoven's 32 sonatas.

Beethoven was absent from the program last night, but it did include music by Bach, Mozart and Brahms. On Thursday night, Goode played this same program before a packed house in the main auditorium at Carnegie, which I'd like to think was just a dry run for last night's main event (tickets for which cost about 5% as much.)

I arrived just as he was finishing up Brahms' Seven Fantasien, a late effort full of impressionistic colors one doesn't normally associate with Brahms, the avatar of "absolute" music.

Impressionism was Claude Debussy's hallmark, and Goode offered it in full measure after the intermission with Debussy's Preludes, Book II. These preludes, from two to nearly ten minutes in length, were composed over a three year period (1911-13), and Debussy probably never intended for them to be performed together. But, taken as a whole, they offer an enveloping soundscape of color and intensity that is all but overwhelming.

The first few preludes were deceptively simple: light and airy like madeleines, but with the rhythmic complexity of jazz. Debussy also employs the damper pedal to blur the structure of individual chords, creating an evocative, dreamlike sound. This is music right at the precipice of modernity, written at the same time Schoenberg was breaking down tonality with the Three Piano Pieces and Second String Quartet. Debussy never quite made that leap himself, but the anticipation is there: it is a window to another world. 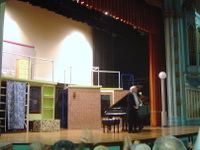 The music gradually increased in difficulty, requiring Goode, who played from memory, to jump all over the keyboard in order to keep up with the torrent of notes. Somehow, he managed to keep it all lucid, playing with what looked like a minimum of effort. Clearly, Goode has spent a great deal of time with this music, and his mastery of it is a remarkable achievement, far more satisfying than the showy stuff of Liszt or Rachmaninoff. He acknowledged the crowd's enthusiastic ovation with Chopin's Nocturne No. 16 in E-flat, leaving smiles all around.

Upcoming concerts at Washington Irving High School include the Daedalus Quartet with flutist Tara O'Connor on April 28 and an unnamed group playing Dvorak and Mozart piano quartets on May 5. There is also a concert next Sunday at Town Hall featuring Jan Vogler and Louis Lortie playing cello sonatas of Bach, Beethoven and Brahms. Ticket info on the People's Symphony website.

Music in the Rat Race 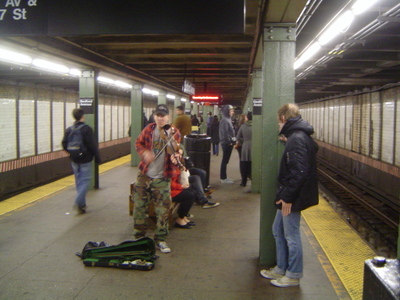 I woke up this morning just in time to hear an interview on WNYC with Gene Weingarten, the Washington Post journalist who recently recruited Joshua Bell to play in a Washington, D.C. Metro station during the morning rush. According to Weingarten, he conducted his experiment, "to see if the rat race so deadens the soul as to inure us to genuine beauty." His rather sanctimonious conclusion was: Yes. But Weingarten's methods leave much to be desired: instead of positioning Bell on the platform where commuters could have heard him while waiting for their train, he placed him at the Metro exit, requiring people to stop dead in their tracks. As a daytime office worker, I probably wouldn't have stopped either, especially if I was running late (which I often am in the morning.) That's not to say that I - or the thousand others who passed by Bell that morning - wouldn't have liked to stop and listen. But, when you have a 9am conference call with a client, or a meeting with your boss, they don't want to hear you were late because you stopped to see some fiddler in the subway (which is all Bell would be to them.) There is a time and a place for everything. That's not capitulation: that's just urban reality.

As a corollary to Weingarten's story, I'd like to present the above busker, who I found playing some impressive Appalachian music Friday night on the Bedford Avenue platform in Williamsburg, a busy station full of young people. In the four minutes I waited for my train, I saw at least 10 people drop money - mostly bills - in his case. If it had been Bell, I bet the crowd would have been massive, even if they didn't know who he was. And, I would expect the same reaction under similar circumstances in D.C.

If you prefer hearing about a morning performance, check out this post from my home station in Park Slope. And, yes, by all means, put down the paper and have a listen while you wait.

Anthony Tommasini has a piece in today's Times about the ongoing search for Lorin Maazel's successor at the Philharmonic, written in the context of the recent goings-on in L.A. Frankly, the piece is pretty airless, and is overflowing with unnecessary adjectives describing the various conductors in play: "superlative"; "formidable"; "exacting"; "indomitable"; "feisty"; erratic." Sounds like someone's been reading one-too-many press releases... Not to mention Tommasini's drunk the Dudamel Kool-Aid like everyone else, apparently without having once seen one of his performances. One would think the Chief Music Critic of the Times would have the wisdom to be a bit less immediate in his praise of an untested 26 year old, practically going so far as to suggest the same for our own orchestra. 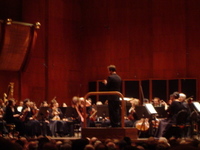 While Esa-Pekka Salonen may be hogging the headlines among conductors these days, another Finn, Sakari Oramo, has been quietly making waves of his own on concert stages across America and Europe. As with Salonen and Minnesota Orchestra director Osmo Vanska, Oramo, 42, is a former pupil of Jorma Panula at Helsinki's Sibelius Academy, and shares their impassioned, energetic technique. In 1999, he was hired to succeed Simon Rattle at the City of Birmingham Symphony Orchestra, where I heard him conduct a remarkable performance of Stravinsky's Oedipus Rex last October, part of his ongoing "IgorFest" of Stravinsky's complete works.

The first half of last night's New York Philharmonic concert was devoted to Shostakovich's Violin Concerto No. 1, featuring the young Georgian Lisa Batiashvili. Oramo has known Batiashvili since 1995 when, at 16, she won second prize in the Sibelius Competition in Helsinki, while he was the concertmaster of the Finnish Radio Symphony Orchestra. (He became the orchestra's chief conductor in 2003.) She is scheduled to perform with him in both Birmingham and Helsinki later this season, and it's obvious they have a deep affinity for each other.

Batiashvili started off a bit tentatively, but by the Scherzo she had found her groove, snapping her bow across the strings with Slavic flair. In the dirge-like Passacaglia, she got some great, gritty tones from her Strad while the orchestra backed her up with a big, majestic sound. That is, until the solo cadenza, one of the longest and most difficult in the repertoire, requiring the soloist to play at breakneck speed for nearly five minutes. Batiashvili nailed it, her bob of brown hair bouncing like a mop as she played. I immediately sensed this was no run-of-the-mill virtuoso: this was a true artist, with deep connections to this music and it's motives. Shostakovich is, to employ an overused phrase, "in her veins." After the fiery finale, she received a warm and much-deserved ovation.

After intermission, it was Oramo's turn to shine with the music of his countryman, Jean Sibelius. Conducting from memory, he started with the 6th Symphony, a cheerfully restrained work with both Romantic and Minimalist textures. Unfortunately, the Philharmonic's strings lacked the warmth and texture this symphony needs, but I can't say for certain if the fault lies with the players or Avery Fisher Hall, which is a poor concert venue in more ways than one. (The hall is due for a complete renovation in the 2009 season.)

The concert ended with Sibelius' Tapiola Suite, which was commissioned by the Philharmonic in 1926 (and which they surprisingly haven't performed since 1934.) The 20-minute piece depicts the mythical Norse forest, and is full of dark and brooding sounds, dense and hazy like a thicket in the fog. The work gradually builds in intensity, giving the formidable Philharmonic brass and percussion a decent workout. Even the strings rose to the occasion, at one point shivering like icy winds through the trees. Oramo was clearly in his element, and must have felt deeply gratified to revive this music with the Philharmonic, to which they can claim just - if prodigal - ownership.

Next week, the Philharmonic kicks off their Brahms the Romantic festival, which, on the surface, is about as innovative as a revival of Cats. Still, it should be interesting to hear what music director Lorin Maazel does with these masterworks. I'll be at the May 31 performance of the 3rd and 4th symphonies, which are not often heard on the same program.

Postscript: This season, the Philharmonic and Carnegie have both adopted a pre-recorded announcement, loudly asking patrons to turn off their cell phones before the concert begins, and again after the intermission. It is a jarring, but effective measure - and given the vast number of brain-dead patrons who waited until that exact moment to turn off their phones, it is an institution which is likely here to stay. I long for the day when concert halls and theaters finally get aroung to installing signal scramblers, blocking the reception of all but doctors and other essentials. (FYI - lawyers and bankers are not essential.)