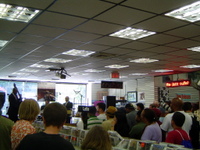 If you were to ask someone where you could hear some "free" jazz yesterday, most folks probably would have told you to check out the 12th annual Vision Festival over at the Angel Orensanz Foundation, founded as an avant-garde alternative to the more establishment JVC Jazz Festival. (The Vision Festival closes tonight; JVC runs through next Sunday.) Free jazz isn't up my personal alley, but I did hear some terrific jazz - that happened to be free - yesterday afternoon at J&R Music World. Ron Carter and his quartet (Stephen Scott, piano, Payton Crossley, drums, & Rolando Morales, percussion) played a full set to a packed room, as well as a live radio audience over WBGO 88.1FM. 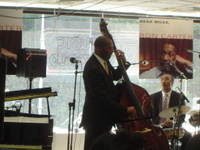 Carter is literally a living history book of jazz, having played with everyone from Art Farmer, Thelonious Monk, Freddie Hubbard, and, most importantly, Miles Davis from 1963-68. Carter's new album, Dear Miles, is a tribute to those years, which he spoke about with WBGO host Monifa Brown, saying that it was like going to work in a lab.

"We didn't know we were doing some of the most important work in the history of jazz. We just put on our labcoats and went to work. But, everyday, someone would contribute something new. So, that was special." 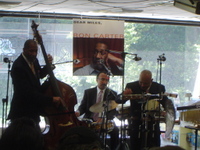 The quartet, all dressed in dark suits, white shirts and ties, played with elegance and precision, with an emphasis on rhythm. But they weren't afraid to let their hair down: after an impossibly long volley between Carter and Scott, all Morales could do was lean back and laugh out loud. You got the feeling they could have kept going like that all night, were it not for Brown finally taking over the mic to close the program.

For those with the cash, Carter will be playing in his own 70th birthday tribute this Wednesday at Carnegie Hall, playing with some of the great musicians with whom he's shared a stage over the past 45 years: he'll play in a quartet with Herbie Hancock, Wayne Shorter, & Billy Cobham, followed by a trio with Mulgrew Miller & Russell Malone, a duo with Jim Hall, and then finally his regular quartet. Tickets available on Carnegie's website. 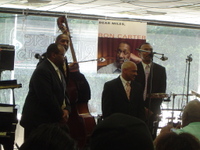 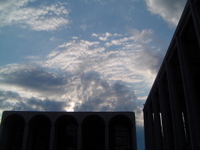 I made is back in time for the Philharmonic last night, with an early 20th Century German program led by music director Lorin Maazel, in their final subscription concert of the season. The first half of the program featured American soprano Deborah Voigt, who is possibly the leading Strauss and Wagner soprano of our time; she will sing the title role in next season's Metropolitan Opera production of Tristan und Isolde, and will sing Brunnhilde in the Met's new Ring production in the 2008-09 season, a role I saw her debut two summers ago at Tanglewood, where she sang Act III from Gotterdammerung. (She also sang the role of Sieglinde in Act I of Die Walkure.) 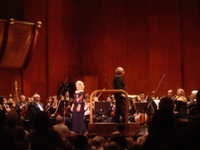 Last night, her clear, high soprano was on full display in four songs by Richard Strauss, all orchestrated by the composer. Only one of the songs - the haunting "Morgen" ("Morning") - had been performed before by the Philharmonic. Of the other songs, "Lied der Frauen" ("Song of the Women") was particularly transfixing, with it's drawn out, Wagnerian ending. But, Voigt saved her best for last, letting her massive Earth-Mother voice rip in the ecstatic "Celebration of Spring." As an encore, she Sang a fifth Strauss song, "Erzeihung" ("Education"), which was slightly less dynamic but no less wondrous. 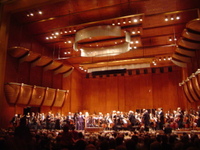 Gustav Mahler was only four years older than Strauss, and the two great composers were close. (You can read an interesting anecdote about them on the day of the premiere of Strauss' Salome in this excerpt from Alex Ross' upcoming book The Rest Is Noise.) Strauss, who outlived Mahler by nearly 40 years, would later return the favor Mahler had shown him by conducting several of his symphonies, but to the best of my knowledge, he never conducted the Seventh, which concluded last night's program. This huge work, lasting nearly an hour-and-a-half, begins darkly and slowly unfolds over five movements, tracing the imaginary journey of a wanderer through a dark landscape. I was put off by the uncertain brass section, particularly the horns and trombones, which were wobbly, if not downright off in the early movements. They seemed to finally pull it together in the fanfare-laced finale, but an orchestra of this caliber - and this payscale - should be able to nail those notes from the first downbeat. I can't even begine to imagine how Mahler - a former NYP music director himself - would have reacted had he been on the podium. 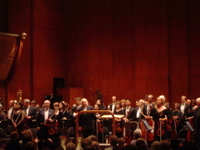 The Philharmonic will be playing their populist Summertime Classics series for the next couple of weeks, and then they're off to the Bravo Vail Music Festival before returning in July for the annual free parks concerts in July. Let's hope the mountain air blows some wind into those tattered sails... 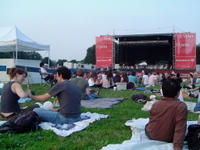 Dining during the opera is an old tradition, going back at least as far as the 18th Century. At Venice's La Fenice, for example, patrons with private boxes were known to eat and drink throughout the performance, even going so far as to close the stage-facing curtain. Opera was seen much less as a serious artistic experience than as a social night out. 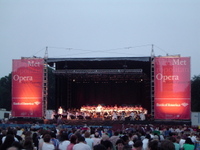 Of course, you won't see that these days at the Met, where box seats go for $800 and up and well-heeled patrons usually take their meals on the Grand Terrace. But, when I go to see the Met Opera in the park - especially in my own local Eden of Prospect Park - the opera itself is secondary to the experience of enjoying a warm summer evening outdoors with friends, catching up on their goings-on while sharing a bottle of wine or two. Or three.

And, in the best of circumstances, it is an opportunity for people to experience opera for the first time, without the forbidding formalities of the Met, or even City Opera. You don't have to know who James Morris is. Or who Charles Gounod is. Or even who Faust was. For example, my friend and former co-worker Pete, whose wife is an aspiring singer in her own right, told me he thoroughly enjoyed the experience, and would love to see "the real thing" sometime. Now, if that isn't music to the Met's ears... 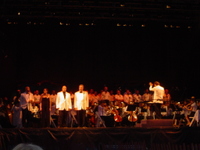 Also with me was my good friend Pat, with whom I've been to the Met on numerous occasions (usually in standing room), including at least half-a-dozen performances by American bass James Morris, either as Wotan in Wagner's Ring, Hans Sachs in Wagner's Die Meistersinger, or Scarpia in Puccini's Tosca. (That only leaves 51 roles in which we haven't seen him.) Last night, he sang a dastardly Mephistopheles, offering up a terrific demonic laugh in Act Four where he mocks Faust's beloved Marguerite, sung ably by soprano Ellie Dehn in her first Met appearance. (I'm looking forward to her official Met debut next season in Philip Glass' Satyagraha.) Also excellent were veteran tenor Fernando de la Mora as Faust and baritone Sebastian Catana as Marguerite's protective brother, Valentin. The Met Orchestra sounded great as always, even through the tinny stage-based amplification. (They didn't bring the usual satellite speaker setup this time.)

Tomorrow, I'll be out of town on business, but hopefully most New Yorkers will get to enjoy at least some of Make Music New York, the annual musical celebration of the summer solstice which is making it's NYC debut 25 years after the Paris founding. I hope to make it back in time to see the NY Philharmonic in their final subscription concert of the season, performing Mahler's 7th Symphony and songs by Richard Strauss, featuring soprano Deborah Voigt, who sang Strauss' Die äegyptische Helena at the Met in March. Should be epic.