No Smiles This Summer Night 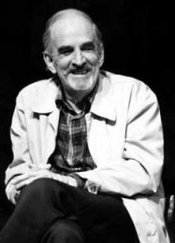 "Intimations of divinity can be found in classical music, in which I think there is a sort of human holiness.” (from "Bergman Island," 2006)

"His use of classical music, especially in what to me is his greatest film, “Persona,” adds an incalculable profundity to his work." (Stephen Holden, The New York Times, 7/30/07)

"He who wanders this street
Full of hardship, becomes clean
Through fire, water, air, and earth.
If he the terror of Death
Can overcome, he vaults
From the earth, heavenward;
Illuminated, he will be in good
Standing, to consecrate himself
Entirely to Isis." 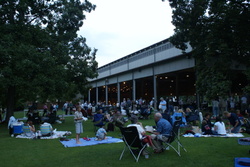 The weather held up yesterday, and the picnickers were out in force at Tanglewood, the storied summer home of the Boston Symphony Orchestra and home of the Tanglewood Music Center, one of the world's leading centers for musical study. I've been coming up here pretty much every summer for the past 15 years, starting the season after Leonard Bernstein gave his memorable final concert here in 1990.

The legends of Tanglewood are legion: this was where Bernstein learned to conduct, where Copland learned to compose, where countless others have come to learn and/or teach. Bernstein used to say there is a magical quality to the place - something about the way the mountain air blows across the perfectly-manicured lawn, or the spectacular vistas of the rolling Berkshires - that makes everything sound better. 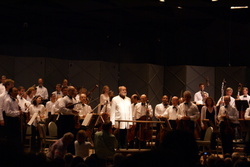 Tanglewood is also famous for it's serious and weighty programming: in past seasons, I've heard everything from the Brahms German Requiem (with the Mormon Tabernacle Choir), to Britten's War Requiem, to a concert combining Act I of Die Walkure with Act III of Gotterdammerung. (Tanglewood also has a strong commitment to contemporary music: last summer, I attended here the first staged U.S. performance of Elliott Carter's one-act opera What Next? conducted by BSO and Met Opera music director James Levine.) 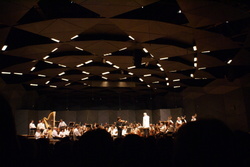 Someone apparently forgot to tell that to Kurt Masur, who last night conducted Prokofiev's "Classical" Symphony and Beethoven's classical-sounding 1st Symphony. Masur, currently the music director of the Orchestre National de France, turned 80 last week, but still had the same passion and energy as when I used to attend his concerts at Avery Fisher, where he was the music director of the Philharmonic from 1991-2002. The BSO sounded like a well-oiled machine in both: I haven't encountered playing that precise and powerful since I heard the Leipzig Gewandhaus Orchestra in Carnegie Hall last season (an orchestra which Masur conducted for over 25 years.) 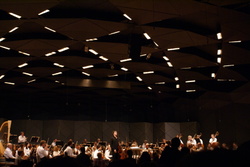 In between, the BSO was joined by superstar violinist Joshua Bell, who, at least on this night, lived up to his outsized reputation in Prokofiev's 1st Violin Concerto. Bell attacked the piece, showing expressiveness in the Andantino's lattice-like cadenza, and fury in the tricky Scherzo, which he made look completely effortless. Surprisingly, there was only a mild ovation afterward: the few times I've seen Bell, the crowd typically goes wild afterward, demanding at least one encore. Tough crowd up here in Lenox. 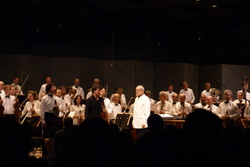 During the intermission, I got to speak for a bit to one of the TMC Orchestra students about tonight's all-star performance of Verdi's Don Carlo, with Levine conducting. (He also conducted the opera last season at the Met.) She told me that they've been in rehearsal every day since Tuesday for six hours, and also had two sessions with Levine last week. Don Carlo is probably Verdi's most challenging opera, clocking in at nearly four hours and with powerhouse roles for six different singers. Still, she didn't seem concerned.

"We're ready," she said confidently. "I mean, these are great singers."

Not to mention a great - and generous - conductor. 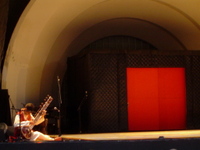 The best art makes you stop and think about your life. When the wind is right, it can even change the way you think about life. And, after an evening with the Bill T. Jones/Arnie Zane Dance Company, I can justly claim such an experience.

Bill Jones is an extraordinary artist who, for the past 30 years, has mixed choreography and storytelling in unprecedented ways, and with unforgettable 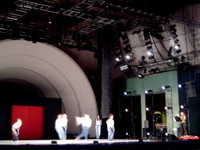 results. Tonight, he offered two recent works at Celebrate Brooklyn, both of which packed a forty-gallon punch. In Blind Date (2005), Jones overtly criticizes the Iraq war, complete with camouflage and onstage casualties. The musical accompaniment was Bach's deceptively serene Violin Sonata No. 1, played live by Amie Weiss in a remix by mutli-instrumentalist Daniel Bernard Roumain, who provided accompaniment on laptop, violin and piano. (They were also joined by Akim "Funk" Buddha, who provided throat singing and percussion.) 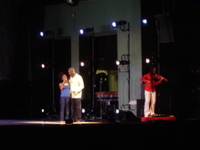 The main event of the night was Another Evening: I Bow Down (2006), in which Jones juxtaposes the disaster of Hurricane Katrina with both the biblical tale of Noah, as well as that of his own upbringing. The dancing in the 80 minute piece was superb, but the true genius lay in Jones' choice of music. I mean, who, in their right mind, would think to combine the overture to Wagner's Parsifal with an onstage hardcore band: the Bronx's Regain the Heart Condemned? 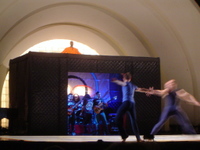 The battle between the two sent this particular listener into an ecstatic trance, with Wagner emerging as the eventual victor. (For good measure, Jones stripped to his waist and threw Regain's lead singer, Oscar Rafael Vargas, around like a rag-doll.) More meditative music was also supplied by contemporary Russian composer Anton Bagatov.

In the piece's extraordinary conclusion, Jones stands on stage and counts forward the years, starting with 2007. The wonder in his voice 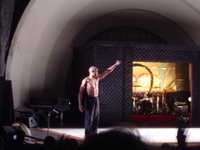 increases with each passing year - 2020...2030...2040... - leaving us all to wonder which exactly will be our own end date. In case the message was at all ambiguous, Jones encouraged us all to live life to the fullest, with the hope that we get to see it from all sides before we pass.

Jones won this year's Tony Award for choreographing Spring Awakening, and half-jokingly claims that his 90 second appearance on primetime TV reached more people than his entire 30 year career in contemporary dance. (You can watch his wild acceptance speech here.) One can only hope the 2,000 or so he touched tonight in Prospect Park will pass along word of his magic outside the bright lights of Broadway.