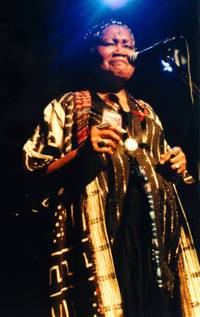 Unfortunately, blues legend Bobby Blue Bland has canceled his Celebrate Brooklyn appearance tonight due to illness, but the replacement is no slouch: Odetta, the legendary folk singer who has been performing and recording nonstop since 1950. She is a key figure in the history of popular music in this country, and has inspired countless musicians of every stripe, including none other than Bob Dylan:

"The first thing that turned me on to folk singing was Odetta. I heard a record of hers [Odetta Sings Ballads and Blues, 1956] in a record store, back when you could listen to records right there in the store. Right then and there, I went out and traded my electric guitar and amplifier for an acoustical guitar, a flat-top Gibson..."

She Did It Her Way 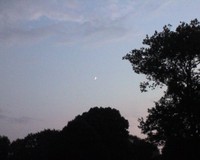 I didn't have a ticket to last night's Ani DiFranco show in Prospect Park, but I did manage to catch her set from outside the (loosely) covered fence. (Pardon the low grade cellphone pics.) The near-sellout crowd was largely comprised of her loyal screaming-girl fan-base, which knew the words to most - if not all - of her songs. DiFranco herself seemed generally overwhelmed by the reception, happy to be back in New York, and specifically, "out in the wilds of kinder, gentler Brook-lyn."

"I have the best job," she said, in a schoolgirl-teasing tone of voice. "Seriously, I wonder sometimes if I really deserve all this." 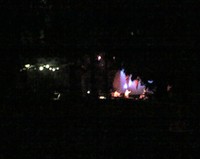 DiFranco can take satisfaction in having succeeded on her own terms, famously eschewing the label system in favor of founding her own Righteous Babe Records, on which she has released 18 albums of her own music, plus a dozen others by like-minded artists such as opener Anais Mitchell and Toshii Reagon. As a relative newbie, I found her music alternately frank, earnest, edgy, gentle, and transporting. She sings in a high register, but with deep, emotive power, honed over nearly 20 years of nonstop performing. She lives up to her billing as one of the best live acts on the circuit, sustaining an impressively high level of energy straight through her 90 minute set, accompanied by drummer Alison Miller and bassist Todd Sickefus. 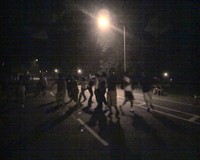 She came back for two encores (one with Reagon, who sang wordless backup) before the bandshell pulled the plug on what could have easily turned into an all-night affair. At least these happy kids had time to get their dance on in the middle of the Prospect Park transverse.

DiFranco will be on tour off and on for the rest of the summer and beyond.

Sunday in the Garden With...Pool 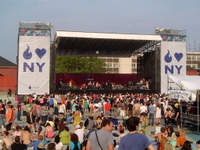 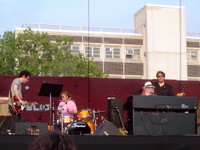 Tommy McClain with Yo La Tengo 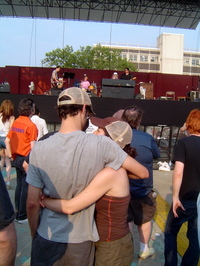 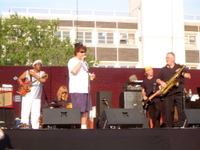 Rockabilly Legend Ray Sharpe with the A Bones 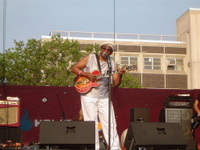 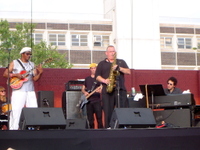 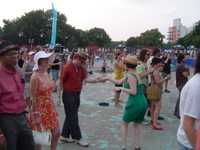 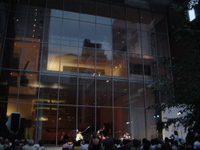