A funny thing happened to Brooklyn Philharmonic music director Michael Christie on his way home from the 8 Seasons concert Friday night. He stopped off for a beer at Eammon Doran's on Montague Street in Brooklyn Heights, and started chatting with the bartender, Seamus O'Toole, who apparently considers himself some sort of amateur conductor. One thing led to another, and eventually,

Christie invited O'Toole to conduct "The Star Spangled Banner" to open last night's concert at the Prospect Park Bandshell. O'Toole dressed for the occasion, wearing a blue jacket, white pants and a red bow tie. His podium style was minimal at best, barely moving his baton. But, it sounded fine to me. And O'Toole got the thrill of a lifetime.

I get the feeling we can expect more such gestures from Christie, 33, one of the new breed of American conductors who understand the need to bridge the gap between the stage and audience, whether by offering guest conducting slots to unassuming locals, engaging the community with education and outreach initiatives, or by simply talking in between pieces in order to make them more accessible to an audience that, for the most part, have never set foot inside a concert hall.

The program started with a couple of familiar American favorites. Copland's Fanfare for the Common Man and Ferdie Grofe's Grand Canyon Suite, which offers a musical portrait of the natural wonder. Christie chose to speak before, during and after the Grofe, describing in vivid detail the canyon sunrise and sunset, the clopping of mule hooves, and the violent storms of the "Cloudburst" section. (Christie is also the music director of the Phoenix Symphony, and presumably has made the trip to the canyon more than once.) He warmly welcomed the audience's applause between each of the five movements.

Violinist Mark O'Connor comes from the world of American fiddle music, and is perhaps best known for his 1996 release Appalachian Waltz, with Edgar Meyer and Yo-Yo Ma. Since then, O'Connor has set his eyes squarely on the world of concert music, having written no fewer than six violin concertos, including the well-known "Fiddle Concerto."

His latest, a double concerto for violin and cello entitled "For The Heroes" received it's NY Premiere last night, with O'Connor and the exciting young cellist Maya Beiser performing the solo parts. (The piece was dedicated to Yo-Yo Ma in 2004.) The connections to Copland's music were immediately apparent: fast, driving rhythms, familiar folk melodies, open bowing on the strings. But, O'Connor takes it one step further, fully integrating the Texas fiddle tradition in which he was reared. Texas fiddle - as opposed to more

familiar folk styles such as bluegrass or Celtic music - is known for its tight structure and adherence to melody, which gets embellished more and more with each repetition. The result is a rhythmic, accessible sound that makes an essential contribution, placing this music in its rightful place in the western musical tradition.

In the middle of the final movement, he and Beiser dueled on an incredibly long and exciting cadenza, with most of the audience swaying and tapping their feet throughout. When Christie cued the orchestra, the audience sprung to their feet in spontaneous applause, not realizing the piece hadn't yet ended. Fortunately, O'Connor had a suitable orchestral climax waiting, sending the audience of thousands into a wild ovation. For an encore, O'Connor played a demoniacally fast solo, which sounded like an Irish jig played at 78 RPM.

There will be a couple of more performances of the 8 Seasons program with Lara St. John: Tuesday at Asser Levy park on Coney Island and Wednesday at the Naumburg Bandshell in Central Park. Both start at 7:30 and are free. 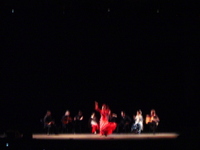 A couple of excellent outdoor events the past two nights, each featuring the distinct sounds of Spain. Last night, it was the flamenco, accompanying Noche Flamenca's live dance performance at 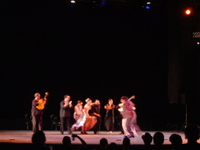 sounding as if they were channeling the spirit of the great Sufi mystics. Combined with the explosive dancing of Soledad Barrio, Juan Ogala and others, it was a powerful experience that got the whole bandshell up on its feet. 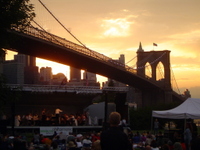 I don't usually prefer to sit in the back at concerts, but that was the place to be at tonight's event in Brooklyn Bridge Park, where the Brooklyn Philharmonic performed the Four Seasons of both Antonio Vivaldi and Argentine composer Astor Piazzola, with the bridge and a glorious sunset as a backdrop. The Philharmonic's young music director Michael Christie led the performance, opting to 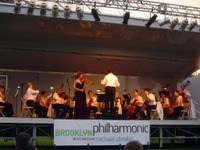 alternate the famous Vivaldi concerti with those of Piazzola, who took his inspiration from Vivaldi, often quoting him at length. I thought violinist Lara St. John's performance of the Vivaldi lacked the necessary fire, but she played the Piazzola with just the right amount of swagger, swaying her hips in time to the tango rhythms. 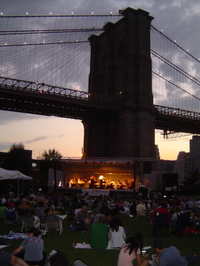 Christie spoke after the performance, and was warm and engaging in relaying some brief information about what we'd just heard. He also reminded the crowd that the Philharmonic will be at Celebrate Brooklyn tomorrow night, with an all-American concert featuring violinist Mark O'Connor and cellist Maya Beiser. $3 suggested admission. 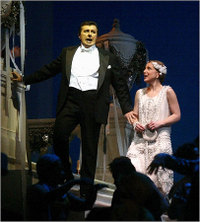 According to Dan Wakin in today's Times, tenor Jerry Hadley, who has suffered from depression and financial troubles for several years - shot himself in the head with an air rifle yesterday, and is not expected to survive. Hadley, 55, was one of the great American tenors of his generation, a protege of both Beverly Sills - who gave him his first big break at City Opera - and Leonard Bernstein, who conducted him on several occasions, most notably in Bernstein's own Candide. I saw Hadley in a number of concert performances, but will remember him most as the lead tenor in Paul McCartney's Liverpool Oratorio, and as the title character in John Harbison's The Great Gatsby, which premiered at the Metropolitan Opera in 1999. A terrible, senseless loss. (Photo courtesy of the Times.)