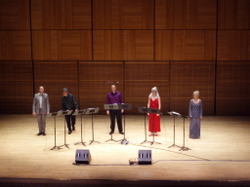 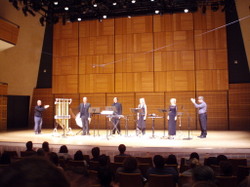 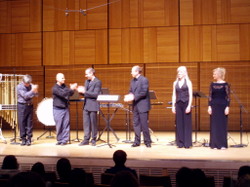 Music on the Web 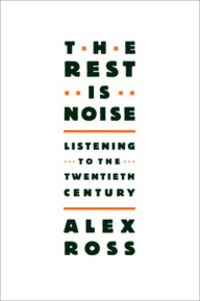 For those who missed it, Alex Ross had a excellent and enlightening piece in last week's New Yorker about how the Web might just save classical music: from blogs, to webstreams, to Naxos downloads. No mention of this particular venture - which I'll chalk up to my increasing musical schizophrenia - but he does call out a couple of Bay Area blogs that are worth a glance.

Yesterday, the hosting service Alex and I share published a brief interview with him, where he discusses the ever-growing appeal of music blogging:

"The blog allows me to indulge in a kind of writing that I couldn't pull off anywhere else — a little bit sly, a little bit whimsical, a little bit aphoristic, a little bit poetic, some days nothing more than a photo, other days a fragment of an essay. It's a very "now" medium, but it also somehow harks back to the nineteenth century when authors would publish bits and pieces of treatises and diaries in the columns of newspapers."

You can always count on Alex for just that right dash of esoterica...

He's out on the left coast right now, touring bookstores in tandem with the recent release of his debut book, The Rest Is Noise, but will be back in Gotham next week with a pair of events, including the Halloween-themed "An Evening of Spooky Modern Music," featuring a performance by pianist Ethan Iverson at the National Arts Club. Tickets are $25, and include cocktails.

And There Was Light 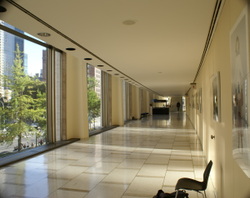 My experience seeing the London Symphony Orchestra this past Sunday afternoon did not start off on the best foot. After a series of ridiculous subway delays and re-routes, I made it to Avery Fisher with about one minute to spare, only to be held up at the door by an overzealous guard who didn't want to let me in with my slightly-outsized camera. I eventually talked my way through, but by the time I scrambled up to the orchestra level, I was told that I would need to wait until the end of Part I before I could enter the hall - a full half-hour wait. So, I grabbed a chair at the end of the foyer facing Broadway and set it up underneath one of the PA speakers, so I could at least listen to the performance.  Even with the tinny distortion, it sounded glorious. (There were also flat-panel monitors showing a closed-circuit broadcast of the performance.)

When they finally let patrons in, I quickly found my seat in the right-center of the orchestra. Unfortunately, an elderly couple were already planted there, and before I could take off to find another open seat, an usher appeared to show the couple to their proper seats, one row in front of mine. Except that another elderly couple was already seated there, the male member of which protested loudly when asked to move. All this time, Sir Colin Davis stood quietly on the podium, head down, waiting for the commotion to cease. Certainly not the way I had hoped to be introduced to one of the great conductors of our time. 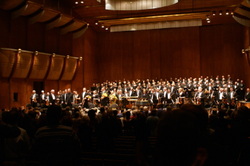 The Creation is one of the great miracles of music, written by Haydn when he was in his mid-60's, at the end of a long career that encompassed some 104 symphonies, 68 string quartets, 15 operas, and countless sonatas, concerti and other works. The seed for this monumental oratorio had been planted during one of his two extended stays in London, where he encountered Handel's Messiah for the first time, at a performance at Westminster Abbey. (Reportedly, Haydn burst into tears at the "Hallelujah" Chorus, exclaiming: "He is the master of us all!") A few years later, Haydn was handed the libretto for The Creation - a mixture of the Book of Genesis and Milton's Paradise Lost that was originally prepared for Handel - and immediately began setting it to music. He spent two full years writing it - the longest he ever spent on any single composition - and claimed the composition was divinely-inspired. "Not from me," he reportedly said. "It comes from a power above." It was an immediate and huge success at it's 1798 premiere in Vienna, and was soon being performed to sold-out houses throughout Europe. 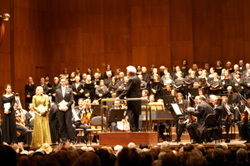 There are some extraordinary musical moments in The Creation, not the least of which is the opening "Representation of Chaos," with its full-on dissonances and off-sounding winds that presage the primal sounds of his pupil Beethoven, or even Richard Wagner's Ring operas. After the archangel Raphael sings in a near-whisper baritone about the darkness on the face of the earth, the chorus enters with the words:

"and God said: Let there be Light,

and there was Light."

The chorus hit the second "light" with extreme force, followed by an explosion in the violin section. Here, Haydn announces, is the beginning, unleashed like a supernova. The remainder of the oratorio - some two hours in all - is written in the dominant key of C-major. 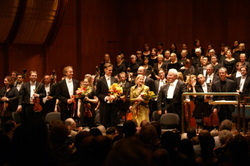 Throughout The Creation, Haydn pays homage to Handel's techniques within his own, significantly more evolved musical language. The stunning choruses at the end of the Third and Sixth days made me sit straight up in my seat, just as Handel's "Hallelujah" always does. Even more stirring were the duets for soloist and chorus at the end of the Second, Fourth and Fifth days, with the orchestra and singers playing off one another. Haydn also appropriates Handel's "text painting" throughout, as in the Sixth day, where the orchestra mimics the roar of a lion, the leap of a tiger, and the light gallop of a stag (much as Camille Saint-Saens would do 100 years later in his Carnival of the Animals.)

Most extraordinary of all is Part Three, titled "Adam and Eve in Eden." After a passage in which the first humans praise God and his new creation, we are suddenly presented with a romantic love duet, catching the listener off-guard much as it must have surprised Adam and Eve themselves. 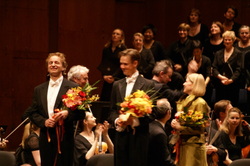 The performances were universally first-rate. Dietrich Henschel, as Raphael/Adam, sang with a powerful baritone that belied his slight appearance. Superstar tenor Ian Bostridge brought his usual expressiveness to the role of Uriel.  Sally Matthews' powerful soprano easily transcended the forces surrounding her in the role of Gabriel/Eve. The London Symphony, in a downsized version of itself, was supple and stunning, giving the lie to the NY Philharmonic's oft-repeated complaints about Avery Fisher's acoustics. (AFH, in fact, bears a remarkable resemblance to The Barbican in London, where the LSO performs.) And the London Symphony Chorus, with their pure tone and heartfelt delivery, showed once again why the British are clearly the best singers in the world. 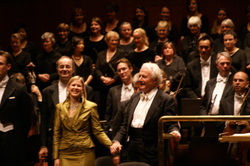 And, of course, there is Sir Colin Davis himself who, at 80, conducted with power and deliberation. He is a surprisingly Puckish figure, tiptoeing around the musicians' chairs like someone half his age. Sir Colin serves as the LSO's President: an honorary title which basically allows him to set programs and conduct performances without holding any administrative responsibilities. (The LSO is a famously self-governing institution, as are the Berlin and Vienna Philharmonics.)

After the final triumphant chorus praising God and his creation, the nearly-full house greeted the massive forces on stage with a warm and well-deserved ovation. One can only hope the LSO's annual trip - now in its 10th year - will continue for decades to come, and that Sir Colin will cross the pond with them for as long as he's able. 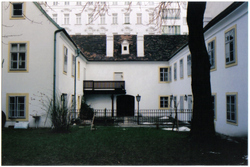