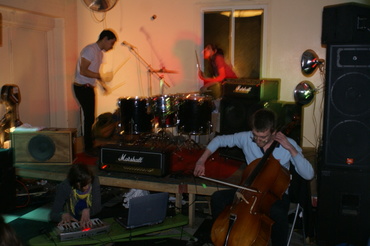 After another late night at work, I took the L train to Williamsburg tonight to a raw space called Death By Audio, located on S. 2nd between Kent and Wythe. I was first invited here last weekend by Jason, who writes a blog about seven inch records called, well, Seven Inches: an indie trend that's way bigger than you probably think. (He also writes for Loose Record, on which he kindly posted some of my pics.) The sound here is experimental noise, and is way more vital than anything you'll hear at some sanitized Manhattan venue. It never ceases to amaze me that places like this still exist in this increasingly uninhabitable city - kudos to curator Todd P for keeping the scruff alive. Next up is math rock singer-songwriter Marnie Stern; the last band, called, consisted of cello, synth, saw, and two rhythmic drummers. Eight bucks. No phone. Deal. 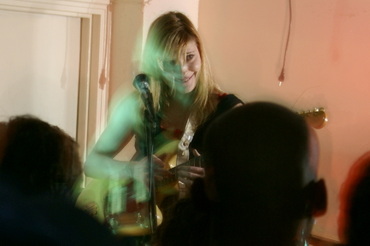 Continue reading "Off The Grid" »

I'll be taking a bit of a break from musical activities this weekend, but did want to call everyone's attention out to some upcoming NYC musical events worth your consideration (All events are also listed on my new Concert Calendar - scroll down to view):

Next week, the Wordless Music Series returns on Wednesday with Max Richter, Cepia and pianist Assaff Weissman playing music by Messiaen and Haydn. Then, from Thurs-Sat, Gustavo Dudamel returns hot on the heels of his NYC debut with the Simon Bolivar Youth Orchestra to lead the New York Philharmonic in Prokofiev's 5th, the Dvorak Violin Concerto (with rockstar Gil Shaham) and Carlos Chavez' Second Symphony. Oh, and if you've got an extra $5, Manny Ax is playing Beethoven and Schubert at the Peoples' Symphony next Saturday at Washington Irving High School.

The week after brings the Boston Symphony to town with Jimmy Levine and Renee Fleming, followed by the Tan Dun's Water Music and The Gate with the Brooklyn Philharmonic and Michael Christie. But, the main event may be later that week, when the Miller Theatre presents the NY stage premiere of Elliott Carter's one and only opera What Next?, which blew me away when I saw it in the summer of 2006 at Tanglewood (see photo below.) The final performance of the run, Dec. 11, lands on Carter's 99th birthday, and knowing Elliott, he will be there to take his bows in person. You should be, too 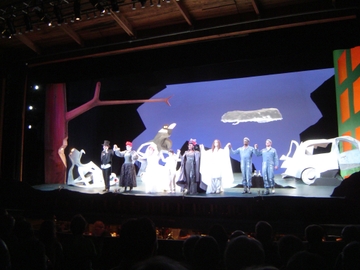 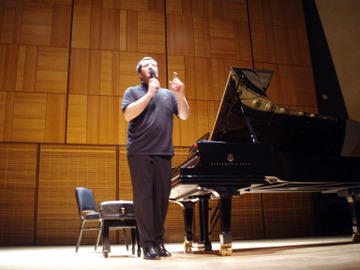 After a week of being out at concerts almost every night, I was really debating whether or not it was a good idea to tack another on Monday night. That is, until I arrived at Zankel Hall and took my seat in the front row for the US recital debut of Thomas Adès. For those not familiar with Adès, he is, at 36, the leading British composer of his generation and the de facto successor to Benjamin Britten, having already written two acclaimed operas - Powder Her Face (1995) and The Tempest (2004), as well as numerous  works for orchestra, chamber ensemble, and soloist. (As if to drive the point home, he has been the artistic director of Britten's Aldeburgh Festival since 1999.)

Adès, who holds Carnegie's Debs Composer's Chair this season, received significant support early in his career from Simon Rattle while he was leading the City of Birmingham Symphony Orchestra, an association that has continued in Rattle's new position as Music Director of the Berlin Philharmonic: he conducted Adès' Asyla on his first concert as the BPO's Chief Conductor, and Adès' newest composition, Tevot, was commissioned by the BPO and given its U.S. premiere last Wednesday. So, an Adès recital seemed an appropriate coda to a week dominated by Berlin-esque musical happenings of various shapes and sizes. (Curious onlookers in the sold-out crowd included composer Derek Bermel, cellist Maya Beiser, and singer-songwriter-BQE composer Sufjan Stevens.)

Adès proved himself to be a formidable pianist with a wide-ranging program that included works by Janacek, Castiglioni, Stravinsky (again!), and a fiendishly difficult work by American composer Conlon Nancarrow, best known for his literally unplayable compositions for player piano. Adès also played two of his own compositions: Traced Overhead (1996), and Darknesse Visible (1992): challenging works written in his early 20's that sound easily like the work of a more mature composer. Adès said that this is the music he plays at home for himself, and he spoke briefly before each selection in a deep bass voice, offering insightful, occasionally quirky observations. Of Traced Overhead, he said: "It's meant to sound like concentric circles going up into the clouds." 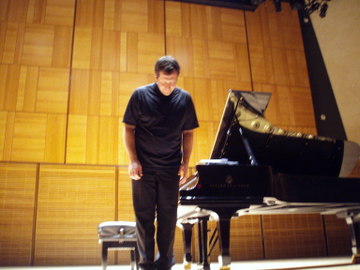 Adès seemed a bit awkward onstage, hunching over as if to conceal his huge frame. But, once he started playing, he seemed deep in the throes of some mystical ecstasy, his mouth open to the sky. After several curtain calls, he played three encores: a beautiful rondo by Couperin, followed by two more pieces by Janacek - the last of which, "The Golden Ring", lasted all of 20 seconds and was apparently the  last thing Janacek ever wrote.

Adès returns March 28-29 to conduct the Birmingham Contemporary Music Group - which he used to direct - in two concerts: one featuring his own music and the other a performance of Gerald Barry's opera     The Triumph of Beauty and Deceit. Tickets range from $20-$40.