BPO On The Cheap

For all those who aren't able to make it to the BPO's bi-annual concerts at Carnegie this week (yes, they do come every other year, not just when Carnegie decides to put on a festival), WNYC (93.9FM) is broadcasting tonight's concert live. (For those not in NYC, you can pick up the webstream here.) On the program is Thomas Adès' Tevot and Mahler's Das Lied von der Erde. Rattle often does this sort of program: new, somewhat challenging work followed by established masterpiece. I remember the first time I saw him was in 2003 in Vienna, where he programmed Varese and HK Gruber on the first half, Ein Heldenleben on the second. One Viennese patron in her 30's approached me at intermission and said: "That music was really quite terrible. But the Strauss, it is very beautiful." Guess it all depends on your perspective...

I'll be in the house on Friday for the BPO's final concert, featuring György Kurtág's Stele and Mahler's 10th Symphony, a piece that Rattle and the orchestra have recorded and pretty much own. Kind of a short concert for a $102 Dress Circle ticket, but I guess it's slightly cheaper than what it would cost to fly to Berlin...

P.S. (9:20p) During the intermission feature, WNYC had a taped segment with Rattle, which made note of his practice of admonishing his audiences for coughing. (He gave a death stare to one particularly-croupy patron on Monday during the Shostakovich.) When asked about it, he basically ripped us a new one:

"Nowhere are audiences more abmoniable than in New York. It's a loud city, and people bring that loudness into the concert hall. I know they don't really have a vendetta against us - but it sure sounds like they do."

P.P.S. (10:02p) Ok, we redeemed ourselves (somewhat) by leaving a long silence after the Mahler ended. 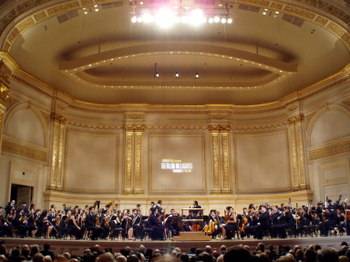 A major event took place at Carnegie Hall last night, and the music world turned out in force, filling Stern Hall to capacity. Every New York critic was in the house, along with Zarin Mehta and Glenn Dicterow from the New York Philharmonic, Frank Solomon from the Marlboro Festival and Peoples' Symphony Concerts, singers Placido Domingo, Thomas Quasthoff and Barbara Cook, pianist Emanuel Ax, etc. etc. And, thanks to Carnegie Hall's generous Club 57th and 7th program, I had the best seat of all: 18th row, dead center, for a mere $33. (Sadly, after yesterday's birthday, this will be the last year I qualify for the program.) Carnegie even added special lighting for the occasion, making the wall sconces shimmer like a golden temple - no doubt for the benefit of the PBS cameras, which taped the concert for an upcoming  Great Performances telecast on January 7.

You would be forgiven for thinking all this hoopla was for the Berlin Philharmonic, but a quick check of the program revealed they weren't scheduled to take the stage until Tuesday night. No, this was the Simón Bolívar Youth Orchestra of Venezuela: an amateur group of music students. Which begged the question: could a youth orchestra, with members as young as fifteen (and none older than 25), possibly live up to all this hype? Would Gustavo Dudamel, the orchestra's 26-year old Music Director, cave under the bright lights of the most celebrated stage in America, if not the world? 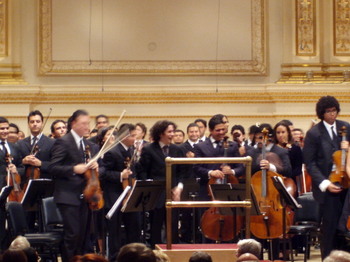 Dudamel seemed to answer that question by bounding out from the wings, mop of hair flying, leaping onto the podium in front of his 200+ players. The Bolívar Youth Orchestra, as you may have heard by now, is no ordinary student band, but perhaps the world's greatest youth orchestra, the product of a 30-year national music education program known as El Sistema that receives regular mentoring from organizations like the Berlin Philharmonic and its Music Director, Sir Simon Rattle. (Rattle has called El Sistema: "the most important thing happening in classical music anywhere in the world.") And Dudamel is already well into his international career, having conducted the Vienna Philharmonic, the Leipzig Gewandhaus, the Chicago Symphony, and the Los Angeles Philharmonic, of which he becomes Music Director in 2009. (He makes his debut with the New York Philharmonic at the end of the month.)

After greeting the generous ovation, Dudamel turned and calmly began to conduct Bartok's Concerto For Orchestra - a challenge for even the most professional orchestras. Contrary to his fiery reputation, Dudamel - who conducted from memory - drew out long, extended phrasing from his players, slowly building a sense of drama that laid the foundation for the final Presto: a convulsive explosion that includes one of the greatest - and most nerve-wracking - fanfares in music. Having heard the Concerto for Orchestra on a number of prior occasions - most recently this past summer at Tanglewood - I thought it was a very strong performance, and nearly-miraculous given the age of the performers. The crowd went absolutely bonkers; Dudamel did a clasp high-five with his friend, Concertmaster Alejandro Carreno, then went around hugging numerous other players while the unanimous standing-O continued. 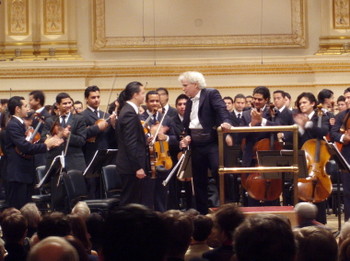 I was less familiar with the work on the second half of the program: Shostakovich's 10th Symphony, written in 1953. Which was apparently also true of Dudamel, as he opted to hand his baton over to probably the world's greatest pinch hitter: Sir Simon Rattle. Rattle was himself a prodigy, taking over the City of Birmingham Symphony Orchestra when he was only 25, and has become a close mentor to Dudamel, who watched from a box seat.

The 10th is a big, sprawling symphony, starting with a 20 minute slow movement that gives way to a jackhammer Allegro that literally had the players leaping out of their seats and the bassists swaying back and forth. Immediately, you could tell this was a whole new of playing: energetic, unrestrained, yet never out-of-control. After that movement, Rattle nodded his head in approval, then opted to retune the orchestra before starting the brooding Allegretto, helping to settle down the potentially-overheated musicians. As a whole, Rattle seemed to get a slightly more exacting - if less manic - performance from the orchestra. The symphony concluded with a fireburst Allegro that threatened to shake the paint off the walls. 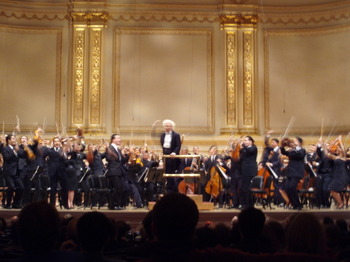 After several ecstatic curtain calls, Rattle consulted with Carreno, then told us that they wanted to play Bernstein's "Mambo" from West Side Story, but several players were missing parts. "We'll just have them make something up," he said, confident of their ability to do just that. Not only did they play it flawlessly, they leapt out of their seats, twirled their instruments - even tossed them up in the air. Now, that's what I call fun.

After, I ran into my friend Bruce in the back, who made the claim that this had been, "a historic evening." The next 20 years will be the ultimate judge of that, but clearly we were witness to an orchestra of remarkable capabilities, with a conductor who is a force to be reckoned with. There is something exciting happening south of the border, and I can't imagine anyone in that hall feeling anything but hopeful for the future of music. Before I run up to Carnegie for the NYC debut of the Simon Bolivar Youth Orchestra of Venezuela and their conductor, Gustavo Dudamel,  a quick recap of the whirlwind weekend. (Today's my birthday, so this will be short and sweet.)

On Saturday, I saw the NYC Opera matinee of Samuel Barber's Vanessa, City Opera's second American opera this season (after Richard Danielpour's Margaret Garner.) The opera, written in 1958, didn't quite live up to the program's billing as "the best American opera ever presented," (uh, Adams? Glass?) but there were some fine performances, especially from the female leads: the volcanic Lauren Flanigan as the title character, Katharine Goeldner as her lovelorn niece Erika, and the amazing Rosalind Elias as the Old Baroness, who created the role of Erika nearly 50 years ago. It was also refreshing to see a female conductor - Anne Manson - in the pit for a change. (BTW - thanks to City Opera's Big Deal program, I was able to get a seat in the dead center of the orchestra for only $30.) 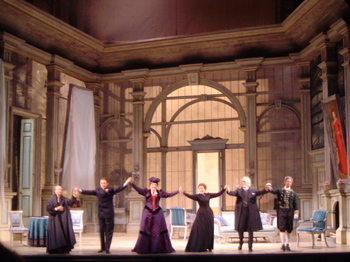 Less than three hours later, I was at Carnegie's Zankel Hall for a concert by the Kammerensemble Neue Musik Berlin, the avant-garde outpost of this year's Berlin In Lights festival. I overheard someone refer to the group as "the German Bang On A Can," which wasn't really correct: while Bang on a Can is rooted in a jazzy sort of minimalism, KNM Berlin feasts on a diet of hardcore European modernism, including works by Luigi Nono and Helmut Lachenmann, as well as younger composers such as Peter Sabat and Ana Maria Rodriguez. (They did use BOAC's marathon approach to presenting, clocking in at nearly three-and-a-half hours, with two intermissions.) What was extraordinary was the commitment exhibited by these players, bringing the same precision and musicianship to this music as you'll hear from the band playing the big house later this week (especially the percussionist on Lachenmann's Interieurs 1, who was just a complete animal.) 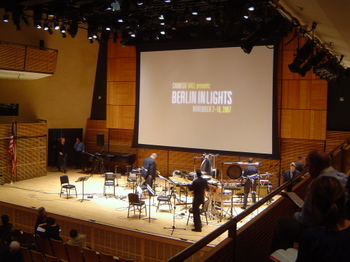 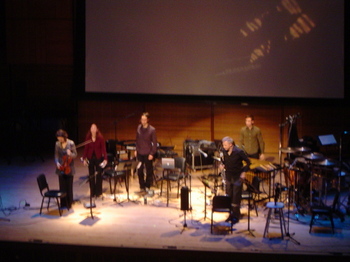 Sunday night, I saw the Parker quartet at Barbes, where they have been in residence on Sunday evenings throughout the fall. They played selections from Smetana's 1st, Mendelssohn's 2nd, Shostakovich's 9th and a pair of rags by American composer William Bolcom. The performance was electric, and the music - which had nowhere to escape in the tiny back room - was almost ear-splitting at times. In the second half, they offered a new, extremely subdued work by Giancarlo Vulcano (of house band Las Rubias del Norte) accompanied by projections of a architecturally-quirky studio he often visits in Brazil.

I'll do my best to keep up with everything that's happening in town this week: one glance at the new Concert Calendar, and you'll see what I mean. 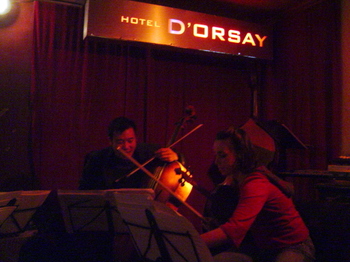 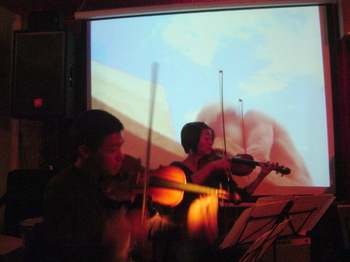 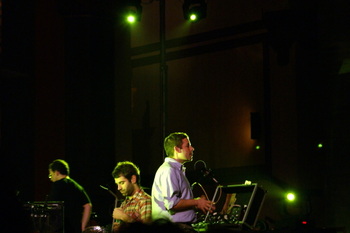 Despite a chilly rain in the city last night, a capacity crowd filled the massive Church of St. Paul the Apostle for the latest installment of Ronen Givony's Wordless Music Series. The big draw was the Icelandic band Múm, who offered the subdued electro-acoustic sound so well associated with that island country. With two female singers and five other musicians on stage, they sounded like a toned-down version of Stereolab. 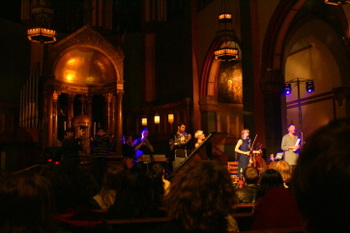 Opening was the Montreal band Torngat, whose versatile members played brass, guitar, percussion and keyboards - sometimes all at the same time.  Occasionally, the drums came across a bit strong, but there were also magical moments, as when horn player Pietro Amato and trumpeter Julien Poissant took off down the nave their mouth sounds bouncing off the high walls and all around the interior. 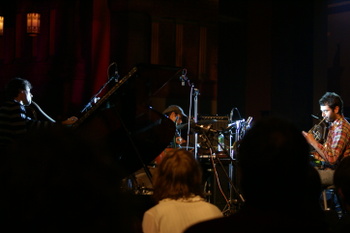 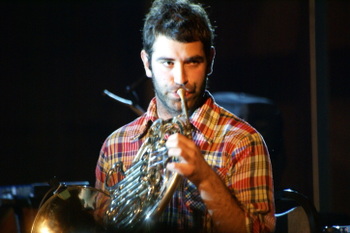 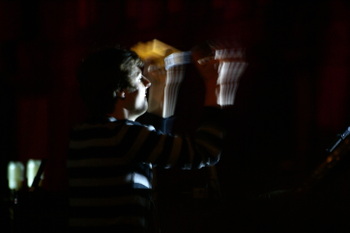 In between was the young cellist Jihyun Kim, who played Bach's first cello suite and Ligeti's Sonata for Cello. Ronen offered up some words of introduction for the benefit of those who weren't familiar with these pieces, and I was immediately envious of them, wondering what it must be like to hear these works for the first time. Kim played without amplification, lending a meditative, ethereal quality to the Bach. The Ligeti started out haunting and creepy,  turning fast and furious in the fiendishly difficult in the second movement, marked Capriccio. Kim - who seemed to play almost nonstop - made it look easy. 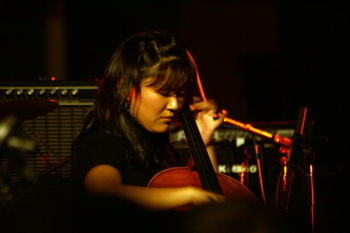 There is a second Wordless show with Mum tonight at the Society for Ethical Culture, where they've promised a completely different, more rocking set. They'll be joined by Hauschka, Bing and Ruth, and David Moore. Tickets at the door. 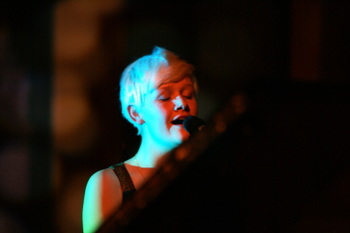 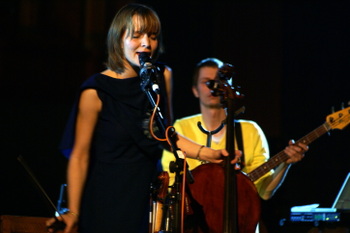 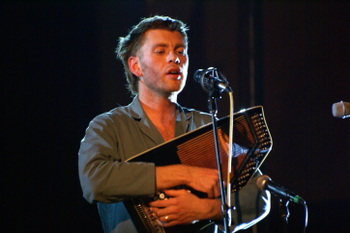