One More Reason to Hate LA... 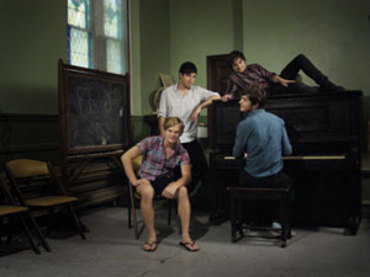 Out of jealousy, that is...

The show, just recently announced, comes on the heels of LA-native Daniel Rossen's performance in Concrete Frequency's Songs of the City concert of singer/songwriters.

Damnit, why can't we be that cool? 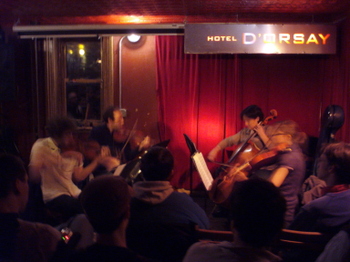 Acoustic instruments are having their moment in the indie scene, and for good reason: they can go fast and slow, soft and loud, harsh and pretty - all in an instant.  Best of all are string quartets, which, in the right room, provide all the texture and amplification you could possibly want, without wires.

Case in point: last night, Barbes hosted the first-ever show by Osso: a young  quartet best known for backing Sufjan Stevens and My Brightest Diamond. I've seen my fair share of chamber groups in that back small room, mostly as part of the ongoing Sunday night Barbes Classical series. But, this had a totally different vibe: open, inviting, self-effacing, completely at ease. It was as if I'd walk 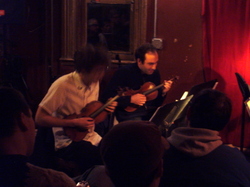 ed into improv night by mistake.

Osso played music they ususally perform with Stevens, inspired by various years of the zodiac. Most of it was tonal, but they smartly muffed it up with some grating effects. "Year of the Snake" was full of glissandos that cellist Maria Bella Jeffers turned into the sound of a record scratching. "Year of the Ox" had lead violinist Rob Moose playing a fast and pretty theme, with dissonant shreiks and growls surfacing like feedback underneath. "Year of the Tiger" jumped around with trills and arpeggios, requiring violist Marla Hansen to play at breakneck speed. "Year of the Boar" sounded Glass-like, with violinist Olivier Manchon playing the wrong side of the bridge over a repeating theme. 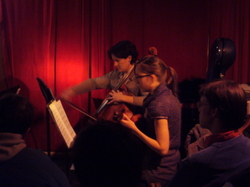 The Osso members all have mutliple side projects going: Moose performs duo arrangements of Bach partitas in Bach Reformed (He plays guitar) and Manchon composes and plays in the Miniature Chamber Orchestra . Both will be back at Barbes, performing back-to-back on 2/11 and 2/25. Oh, yeah, and they play rock, too.

If you like your music kind of out there - and come on, who doesn't? - tune in right now to 91.1 FM for Bethany Ryker's Stochastic Hit Parade, which airs every Sunday night on WFMU from 9p-12a. Think: Stockhausen, Xenakis, Theo Bleckmann and a whole boatload of transcendent ear candy neither you nor I have ever heard of before. Bethany has also been known to indulge in aleatory on-air experiments: a few weeks ago, she solicited live audio samples from her listeners - everything from electric can openers to TV white noise - which she then combined into a five minute collage and played on-air. Personally, I can't think of a weirder, more wonderful way to end the weekend.