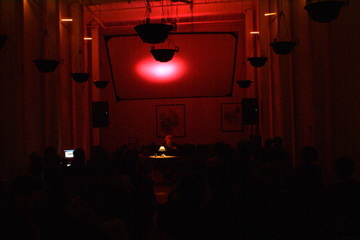 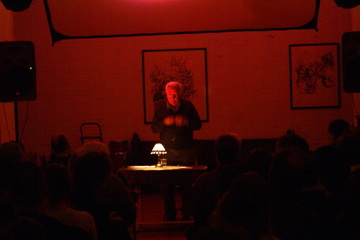 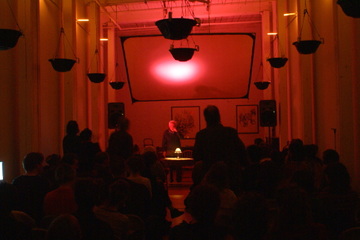 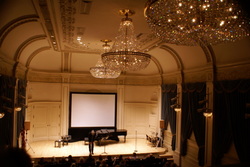 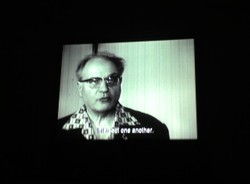 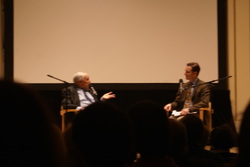 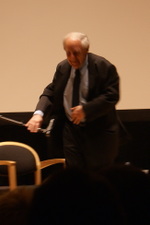 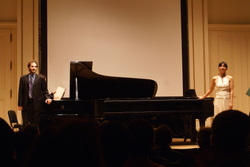 (Well, "live" as in via the PBS website, which is streaming video of the concert.)

4:08am: The Philharmonic has taken the stage, and is playing both the North Korean and American national anthems. They play both standing up, from memory. Impressive.

The hall is filled with party officials, but no Kim Jong Il - at least not in plain sight. 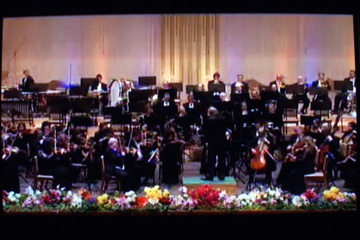 4:14am: After playing Wagner's Prelude to Act III of Lohengrin, Maazel speaks from the stage, introducing Dvorak's New World Symphony. He tells everyone that the Philharmonic commissioned and premiered in 1893. He finishes by speaking a brief phrase in Korean, to the audience's delight.

4:32am: In the Largo now, beautiful warm sound. Whatever they've done to the hall, the Philharmonic sounds terrific. Scattered shots of the crowd show men in dark suits with Kim Il Sung lapel pins, women dressed in brightly colored satin hanboks (matching the colors of the flowers lining the stage apron.) 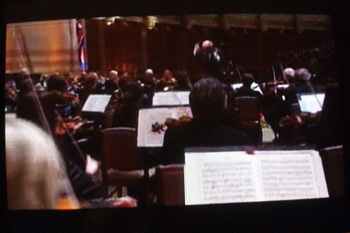 5:00am: Continuing without an intermission, Maazel introduces the supposed final work on the program, An American in Paris. "The next piece we will play for you was written by America's most famous composer, George Gershwin. Someday, someone may well write a composition called Americans in Pyongyang."

Gershwin? What about Copland? Or John Adams? Whatever: the crowd applauds loudly, though politely. Maazel says something else in Korean, then launches into the Gershwin, sounding bright and jazzy. 5:23am: After a rousing, almost propagandist-sounding rendition of the "Farandole" from Bizet's second L'Arlésienne Suite, the American contingent traveling with the Philharmonic, sitting towards the back of the hall, hesitantly rise from their seats. The Koreans in front do not move at first, politely applauding in their seats. Eventually, however, a few begin to stand, and then a few more until finally the entire hall stands and applauds. An incredible moment.

Maazel introduces Bernstein's overture to Candide by reminding us that Bernstein often used to conduct the work himself when he was director of the Philharmonic, and asks us "to imagine him joining us once again for this concert." He then says "Maestro, take it away!" in Korean and walks offstage, leaving the Philharmonic to perform with an empty podium. 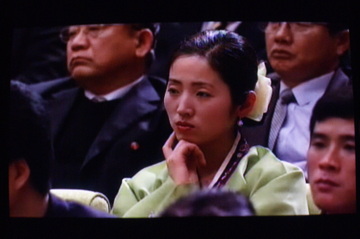 5:40am: The Philharmonic finishes with "Arirang", a well-known Korean folk song whose title loosely translates as "Beautiful Dear":

"Arirang, Arirang, Arariyo...
I am crossing over Arirang Pass.
The man/woman who abandoned me [here]
Will not walk even ten li before his/her feet hurt.

Just as there are many stars in the clear sky,
There are also many dreams in our heart.

There, over there that mountain is Baekdu Mountain,
Where, even in the middle of winter days, flowers bloom." 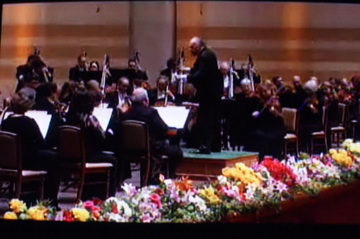 After, the entire audience stands and applauds, without hesitation. A few cheers come from the American section. Maazel is handed half-a-dozen bouquets, and he immediately hands one to Associate Concertmaster Michelle Kim, a Korean native.

The Philharmonic waves goodbye from the stage, and loud "bravos" ring out. Maazel comes out for one final bow standing next to Concertmaster Glenn Dicterow, smiling widely. 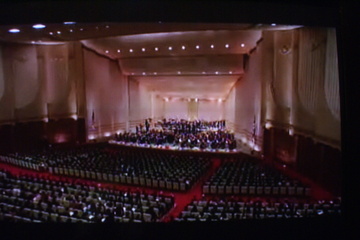