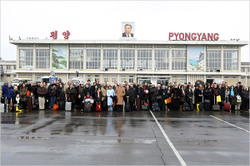 For all you night owls, the New York Phil's "historic" concert from Pyongyang, North Korea will be streamed live tonight on the WNET website, starting at 4am EST. Apparently, the North Korean government has agreed to broadcast the concert live on TV and radio within North Korea, an important concession that the Philharmonic has fought for from the beginning. As Dan Wakin points out on the Times website, this will be the first time the North Korean people will see Americans playing music, without any filters or controls.

"There's something to be said for the message that classical music brings," he says. "The idea that it's an artistic expression to be experienced by each individual on their own. There's no ability by the state to control the way people respond to art."

You can read Dan's full report here, accompanied by a slideshow of remarkably candid photos from Pyongyang.

The program is pretty vanilla by our standards - Dvorak's New World Symphony and Gershwin's An American in Paris - but for the North Koreans, it'll be like having the Berlin and Vienna Philharmonics playing on the same bill. And then some. (No word yet on whether The Dear Leader himself will attend in person.)

If you want to hear (and see) the concert at a more reasonable hour, it will be rebroadcast tomorrow night on both WNYC and WNET at 8pm.

'Tis the season of giving: the annual WFMU Marathon kicks off today, with all proceeds going towards the Jersey City station that is the last and best hope for free form radio in New York (though their web listenership surpassed the terrestrial audience long ago.) Just when you think you've had it with all those pesky public radio fundraisers, these guys whip up the best party on the airwaves, bringing in live performers and offering up all kinds of cool giveaways - provided you pledge. Even if you don't win, there are still plenty of premiums to be had, including t-shirts, bumper stickers, and a whole host of DJ-selected mix CDs. (I just picked up Bethany Ryker's Made to Order: a compilation of performances on homemade instruments such as daxophones, car horns, and water balloons.) You can make your own pledge by putting your info in the fields above and clicking on the Pledge! button.

Peter Applebome has a story in today's Times about the Marathon, which quotes director Jim Jarmusch thusly: “Hands down, WFMU is the greatest radio station on the planet.”  Far be it from me to disagree. 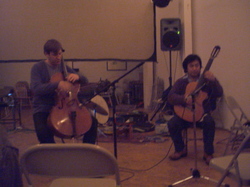 All this month, Issue Project Room has been highlighting various members of the instrument family, exploring their furthest-out possibilities. Last week was devoted to strings, and Friday night's offering was anything but conventional. 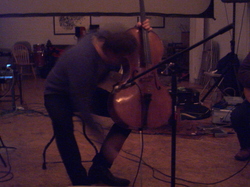 The first set featured cellist Alex Waterman, whose playing sounded like it came from the bottom of a well. His improvisations had a basic sonata structure, but nothing was played directly: his bow scraped gently across the strings, producing an ambient hum, if any sound at all. He stomped his foot and reached down to play the spike, as if in heat. Guitarist Kenta Nagai contributed a desolate soundscape of bended notes and violent body slaps. 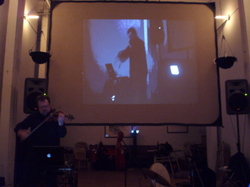 Todd Reynolds offered a multi-media presentation, with live visuals by video artist Luke DuBois. I first encountered Todd when he was the lead violinist with contemporary string quartet Ethel; I've since seen him with both Bang on a Can and indie duo The Books. (We met during a raucous night last summer at the Mohawk in North Adams.) You gotta give the guy credit: he was regularly filling huge venues, and chucked it all to go follow his vision before 20-odd people in an old Gowanus factory. All I can say is, it was a privilege to be one of those lucky few. 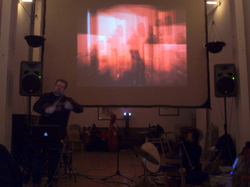 Todd's playing was somewhat less experimental, mixing avant-sounds with minimalism and even some down-home fiddlin'. He played an amplified violin while unleashing a symphony of samples from his iMac, triggered with a row of foot pedals. Accompanying Todd was Satoshi Takeishi on percussion and electronics, laying down a subliminal beat on gongs, tam-tams and various rattles. 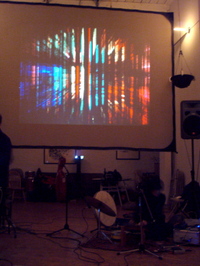 The visuals, which started as a closed-circuit projection of Reynolds and Takeishi, soon became diffuse and abstract, like a Braque painting. Eventually, the images morphed into vertical lines representing all the colors of the spectrum, as if we were staring up through a prism. It was all spectacularly beautiful, like a psychedelic rock show from the 60's. Todd told me after that this performance came off really well, and you'll no doubt be seeing it in larger venues come summer.

Issue Project Room concludes its festival this week with a focus on the voice. New music paragon Robert Ashley will present a solo concert this Tuesday, presenting a sung version of a lecture he presented in 1979. Show's at 8p, $10 at the door.

It's All the Same To Me 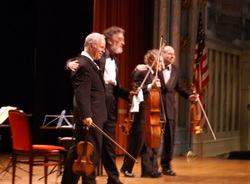 I wish I could have brought along some of my hip(st)er friends on my L-train journey last night. The Juilliard String Quartet may not be the hippest bunch of musicians in town, but anyone that wants to hear what a tight, polished band sounds like owes it to themselves to check these guys out. The Haydn and Verdi were delicate and precise; the Shostakovich literally knocked the air out of the room. Unfortunately, you'll probably have to pay $60 for the privilege; I paid $9, courtesy of the People's Symphony. Of the two bands I saw at Glasslands last night, Wisconsin's Bon Iver impressed the most, combining high-register vocals and electronics with impressive chops on an acoustic and electric guitar. On "Blindsided," singer Justin Vernon went into overdrive, knocking over the microphone as he made his way to play on top of the drum kit.

I guess you could say that, to cop a phrase, I'll fall for anyone who can make me stare at the ceiling and see the sky.

(More pics after the jump.)

Continue reading "It's All the Same To Me" »