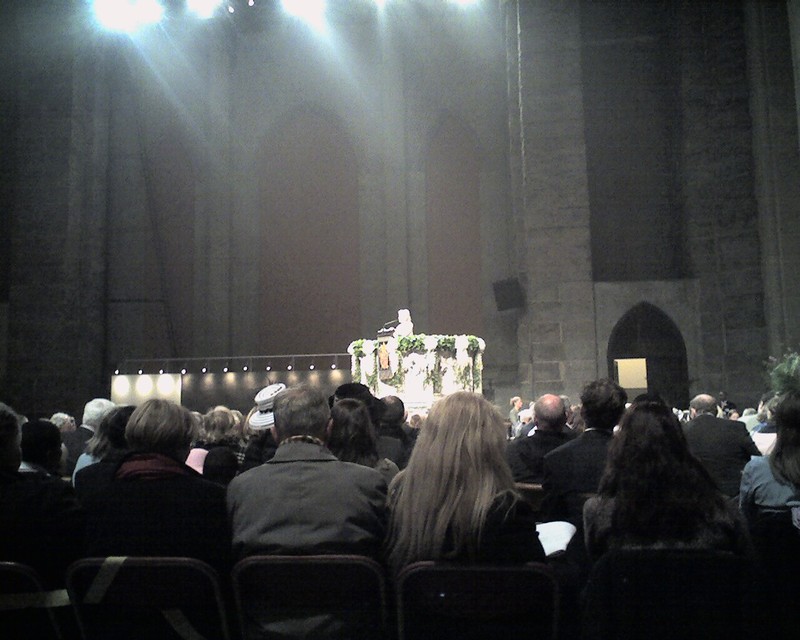 Well. I got in, and the minute Judy Collins started singing "Bright Morning Stars," I completely forgot about the wait. She followed it up with a sing-a-long "Amazing Grace" that filled the immense crossing with a seemingly-perfect unison of sound. Stunning. 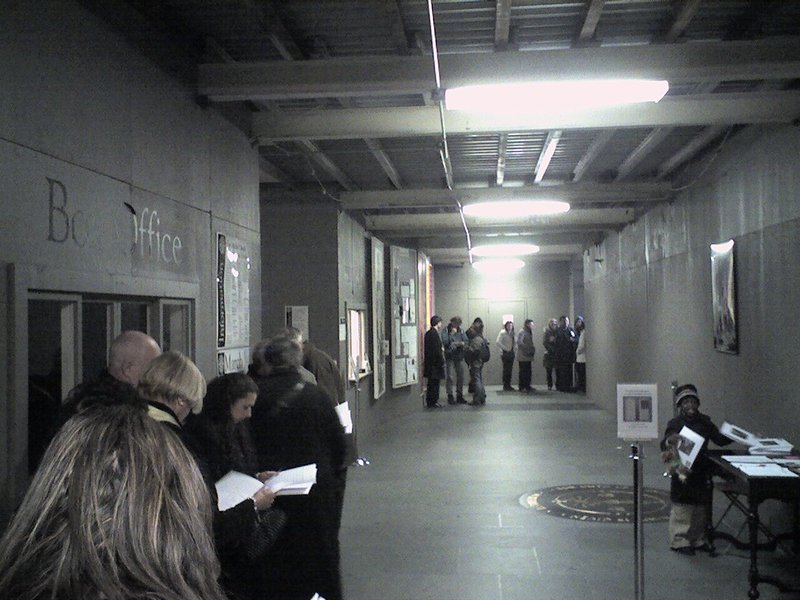 I should have known better than to cut it close at the Cathedral of St. John the Divine this morning, after getting locked out of the Christmas Eve service in December. But, the MTA gods weren't with me this morning, and I just missed getting in, even though I planned ahead and got a reserved seat ticket. At least they're letting me wait in the lobby, in the dim hope that they'll let more folks in after the bishop's sermon. Which I'd much rather be listening to right now than this middle-aged, mink-coat princess talking about her three cats and daily facial-rub.

An usher explained that the Cathedral is at limited capacity due to ongoing restorations from the 2001 fire. The restoration - including the re-installation of the 8,000 pipe Skinner organ - is scheduled to be complete by November, in time for next Christmas. Thank God. 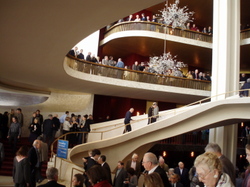 A check of the FoM archives reveals that I've yet to post a review from the Metropolitan Opera. Which is bewildering to me, considering I've been attending operas at the Met since at least 1993, when I was an assistant PR manager for Herbert Breslin, representing singers such as Luciano Pavarotti, Renee Fleming and Deborah Voigt. Since then, I've seen at least one Met production every season, mostly from standing room. 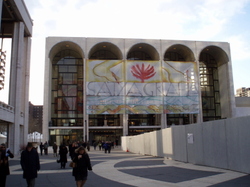 More often than not, the operas I've seen were written by Richard Wagner, the lionized and controversial 19th composer who cultivated a rabid fandom unique in music history: to this day, there are Wagner Societies throughout Europe and America devoted to preserving his legacy. His operas - he referred to them as "music-dramas," emphasizing the primacy of his self-scripted librettos - are sprawling, slow-moving beasts of chromaticism that push music to the edge of tonality: Wagner is generally credited with being the first "modern" composer, setting the stage for the innovations of Mahler, Schoenberg and others. 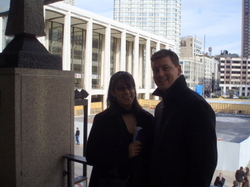 I've become familiar with most of Wagner's operas thanks to the Met, having attended Lohengrin, Die Meistersinger, Parsifal, and the complete Ring in 2000 and 2004. My partner in crime for most of these performances has been my friend Pat, whose girlfriend Ramona made the wise and generous Christmas gift of seated tickets to this afternoon's performance of Tristan und Isolde. And, having never seen this particular Wagner Gesamtkunstwerk myself, I decided to tag along. 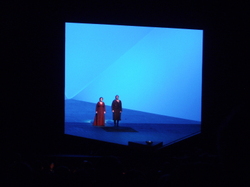 The nearly six-hour opera (including two intermissions) concerns the old Celtic myth of Tristan and Isolde, who fall in love as a result of a magic-potion mixup, thereby bringing to themselves, "unrelenting eternal pain, instead of quick death." This is Wagner as desperate romantic, insufferably so for much of the opera. But, the prolonged exposition is worth enduring for the many extraordinary musical moments: the prelude with it's famed "Tristan chord," the dark, groaning bass at the beginning of Act 3, Isolde's shattering and monumental Liebestod ("Love death") that ends the opera. Tristan und Isolde makes extraordinary demands on its performers, particularly the two lead roles, which are generally acknowledged to be the most difficult in the entire operatic repertoire. Deborah Voigt, a seasoned Wagnerian, delivered a larger-than-life performance as Isolde. Veteran Matti Salminen, well known to Met audiences as Hagen and Hunding in the Ring, let his huge bass fly as King Marke. Michelle DeYoung, who sang Fricka in Die Walkure earlier this season, was outstanding as Isolde's maid, Brangane. The Met's music director - James Levine, perhaps the world's greatest Wagner conductor - led the performance, showing more passion and energy on the podium than I've ever seen from him. 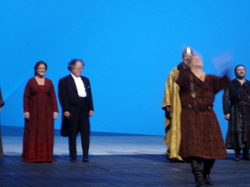 But, the biggest applause was reserved for tenor Robert Dean Smith, who stepped in for an ailing Ben Heppner, thus making his Met debut. His voice occasionally wavered and didn't quite fill the house the way Voigt's or Salminen's did, but he hit all the notes and delivered a fine, dramatically solid performance. Give the guy some credit: singing Tristan in the Saturday matinee broadcast as your Met debut is like being called up from the minors to pitch Game 7 of the World Series. You will be hearing from Mr. Smith again. Yesterday's performance was broadcast live over the radio and in HD to movie theaters around the world. I'd be curious to know if anyone saw the telecast, and how everything looked up close. (Picture of Pat & I with the composer after the jump.)

P.S. I've since learned that this run has been plagued with cancellations: Smith was already the third tenor to sing Tristan (after John Mac Master and Gary Lehman), and during the second peformance, Janice Baird replaced Deborah Voigt mid-duet when Voigt ran off stage with the stomach flu. Alex Ross has the whole story here. 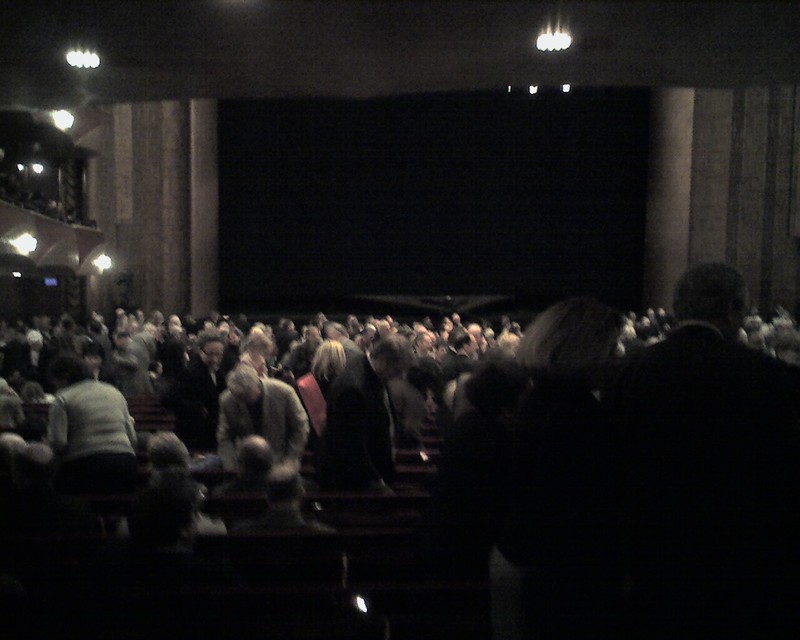 It's intermission after Act 2 of Wagner's Tristan Und Isolde, and we're already past the four hour point. It's good - great even - but I think I need to chill out a bit after this marathon. More pics once I get in front of a computer.