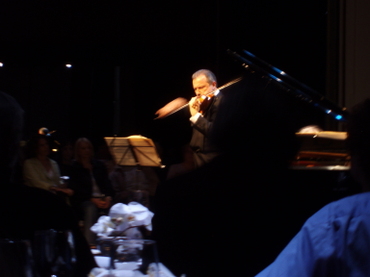 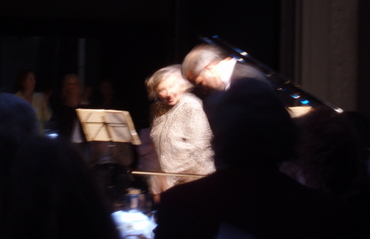 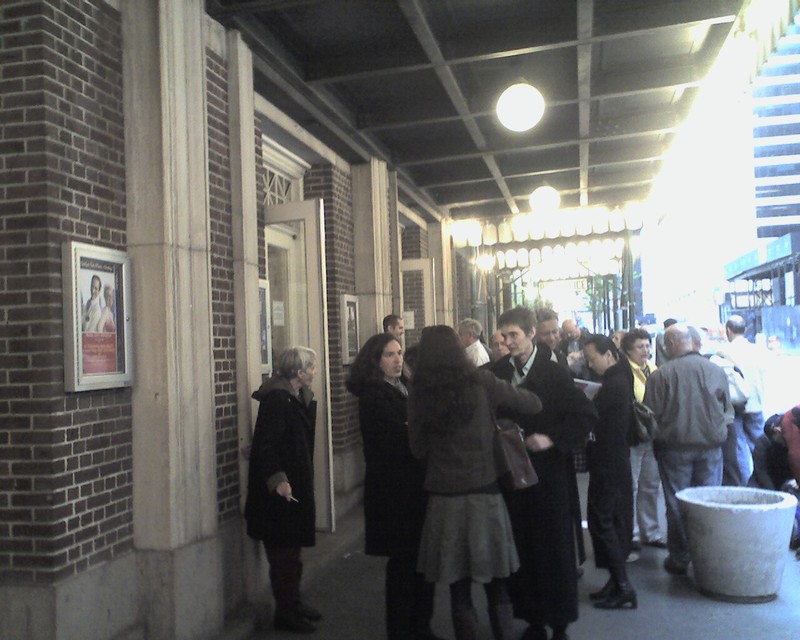 The idea of offering a free piano recital by Richard Goode at Town Hall seems like a good idea in theory, poised to attract a grateful audience of the young and underprivileged. But, once here, you realize it only atttracts the same ill-mannered, overly-demanding geriatrics that show up at every other classical music freebie in NYC. Jeez, people, could you at least stop snoring?

Continue reading "Free For All" » 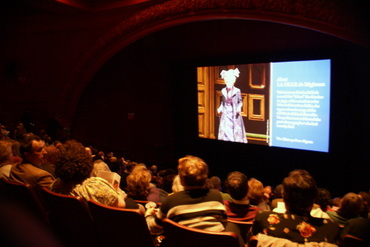 For the past two seasons, I've resisted attending the immensely popular HD simulcasts of the Met's Saturday matinee performances, on the principle that if you live in New York and you're going to dedicate 3-5 hours of your Saturday to sitting in a darkened theater, you should get your ass to Lincoln Center. I mean, how could watching opera in a movie theater possibly be better than attending in person? Especially considering you can get a standing room or Family Circle ticket for the same (or less) money.

But, the more I thought about it, the more it made sense. After all, even the best opera glasses in the world aren't going to get you closeups the way that those cameras can. And, there was weirdly something appealing about being able to eat Jujubes at your seat. So yesterday, I decided to go check out what all the fuss was about. 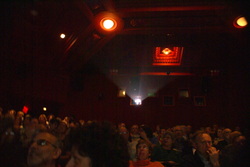 When I walked into the BAM Rose Cinemas five minutes before curtain time, the theater was packed to the gills. (Fortunately, I'd bought my ticket to the screening weeks ago.) I grabbed one of the last available seats - in the third row - and had a look around. The crowd was 60-70% seniors, many of whom revealed themselves to be simulcast regulars. There were also numerous groups of middle-agers, obviously enticed by the ability to purchase four tickets for the price of a single Met balcony seat. I did find a few 20 and 30-somethings, though not nearly as many as the Met would have you believe show up for these screenings. In the end, these simulcasts have become - for better or worse - yet another New York institution. The atmosphere was more relaxed than sitting in the Met, but far more intense than watching it at home on TV (which, btw, you can do every Sunday afternoon on Channel 13.) For one, the singers and sets are all projected larger than life (esp. if you're in the third row.) Everyone laughs and claps at the same time as the live audience (and they'll hush you if you make too much noise reaching for those Goobers.) And, in my case at least, the theater at BAM is situated in a turn-of-the-century performance venue, aiding the illusion that we were actually at the opera. (Unfortunately, BAM doesn't project the simulcasts in HD, and the sound is somewhat tinny.) 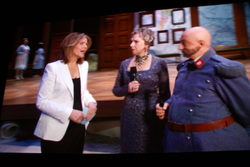 Then, there are the backstage features. Soprano Renee Fleming is a funny and down-to-earth host, literally shoving a microphone into the hands of singers as they come off stage, many of whom she knows personally. In the background, stagehands pushed scenery around and dancers stretched in preparation. Say what you will about the Met: they aren't afraid to show their stuff, warts and all.

The opera on tap yesterday, Donizetti's La Fille du Regiment, is a bit of bel canto fluff that normally I wouldn't be caught dead at. But, it was the last screening of the season, and the new production, by Laurent Pelly, has gotten pretty stellar reviews, largely due to it's top-flight cast. 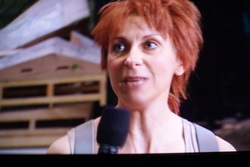 French soprano Natalie Dessay has emerged in recent seasons as the opera world's great actor-singer, and she brought all of her manic energy to the role of Marie: an orphan who is adopted by a French army regiment and falls in love with a local villager. Dessay has a clear and beautiful voice that she isn't afraid to use when called upon (as in her stunning Act I aria "Chacun le sait.") But, she clearly sees herself as an actor first, with the music serving the drama, not the other way around.

"For me," she says in the program notes, "the music is not the goal. The goal is theater." 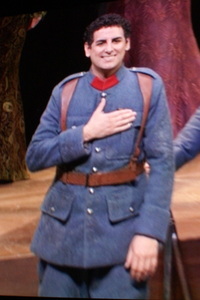 Peruvian tenor Juan Diego Flórez, who sang the role of Marie's lover Tonio, may not have Dessay's acting chops, but more than makes up for it with his golden voice, which can be showstopping. Literally: on opening night, Flórez performed the first solo encore heard at the Met in 14 years - and only the third in over a century - when he repeated the acrobatic aria, "Ah, Mes Amis," famous for it's string of nine high C's. Met director Peter Gelb, who gave the go-ahead for the encore from his box on Monday, stoked anticipation this week when asked if it might happen again during yesterday's performance.

"I don't know what will happen on Saturday, but if the audience in the opera house applauds as enthusiastically as they did Monday night, I would not be surprised if an encore of the encore took place." 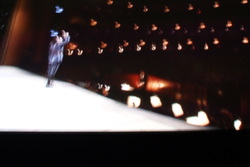 Flórez nailed the aria, and both we and the live audience erupted in an ovation that went on for well over a minute. Finally, Flórez broke his pose, opened his eyes and took a slow, gallant bow. The crowd went bonkers. Their applause went on for at least another full minute, including audible shouts of "Encore!" before Flórez raised his head, smiled...and went on with the performance. After all, it's one thing to break a century-old tradition in front of 4,000 people; it's another to do it before an HD and radio audience of millions. (You can listen to the opening night aria with encore here.)

Together, Flórez and Dessay make an irresistible pair: they are like Lucy and Ricky Ricardo, complementing each other's abilities while pushing each other to new heights of performance, making you laugh all the way. And, this is apparently just the beginning: they'll be back together next season in the Met's new production of Bellini's La Sonnambula. One key figure in this production who hasn't gotten much notice is conductor Marco Armiliato: an affable young Italian who's been working under a low profile at the Met for the past ten seasons as one of James Levine's key proteges. Armiliato kept things appropriately light and frothy, and had a huge smile on his face while leading the applause for Dessay's and Flórez's ovations.

Oh, yeah, and he conducted the entire opera from memory.

Watch and wait: if Armiliato plays his cards right, he's going to have his own opera house someday. Maybe even this one.

There were a number of technical gaffes during yesterday's broadcast - cameras out of frame, mics not working properly, etc. But, all that just served as a reminder that this was a live broadcast, where anything can happen at any time. Which, when you think about everything that can possibly happen during an operatic performance, it's a bit mad to even make the attempt. Kudos to broadcast director Gary Halvorson for managing to keep the wheels on. 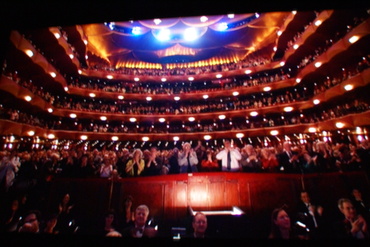 Will I go again? Probably, though I doubt I'll make a habit of it. Watching opera on a screen will never come close to the overwhelming intensity of being inside the Met. But, it's not a bad way to spend a Saturday, esp. if you're with friends. (More pics after the jump.)