Earlier this week, Celebrate Brooklyn and Central Park Summerstage released their lineups, and once again, it's a veritable smorgasbord of (mostly) free shows. Here are the ones you can expect to see me at:

Unfortunately, I'll be out of town for Philip Glass on 7/25 and Ghostland Observatory on 7/26 (both in Brooklyn), but you should go.

(Note: This was originally written for the City Opera blog, which will probably never see the light of day, now that the season's ended. Oh well.) 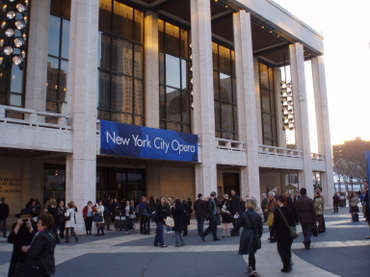 What is opera, anyway? Is it Music? Theater? Performance Art? Opera house directors around the world struggle to answer these questions every season, often coming up with decidedly mixed results.

Refreshingly, City Opera doesn’t seem at all conflicted about what opera’s role is supposed to be. If you want heavy, five hour-plus sagas, go across the plaza. But, if you want to have a relaxed, enjoyable evening out with better-than-average music and stagecraft, City Opera’s your place. That ethos is what, in part, drew Gerard Mortier to become City Opera’s next General Manager: in his remarks at the Morgan Library last month, he came down clearly in favor of opera as entertainment (though Mortier’s idea of “entertainment” may take some getting used to for conventional audiences.)

At the performance of Leonard Bernstein’s Candide I attended last week, I noticed casually-dressed couples watching the opera with their arms around each other, acting as if they were at the movies. I wonder how long it’ll be before they let patrons bring refreshments to their seats (pop corn, anyone?)

It also helps if your opera has memorable tunes, and Candide has no fewer than three: “It Must be So,” “Glitter and Be Gay,” and “Make Your Garden Grow,” all of which have emerged as standards. And, the brief, breathtaking overture - which Bernstein orchestrated himself - is unquestionably the greatest ever penned by an American: the New York Philharmonic used it as an encore on their recent program in North Korea. 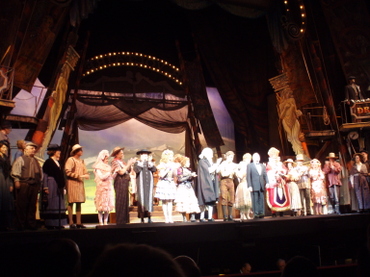 Bernstein, who would have been 90-years-old this year, originally conceived of Candide as a Gilbert-and-Sullivan style operetta, and it was initially produced as a work of musical theater. This landmark 1982 production, by veteran producer Harold Prince, maintains the theatricality of Candide, casting Broadway stars Daniel Reichard (Jersey Boys) as Candide and the hilarious Richard Kind (The Producers, Spin City) as Voltaire/Dr. Pangloss, along with a supporting cast of young, attractive singers. But, it goes deeper, amplifying the music with orchestral magnitude which serves to drive home the philosophical issues raised – and skewered – by Voltaire. It has been presented almost exclusively in opera houses ever since.

Most importantly, Prince’s production keeps things fun. My friend and I sat in the third row of the orchestra, where we were surprised to see Candide sidestep through the entire aisle directly in front of us while singing “It Must Be So.” I can’t remember ever being that close to a singer in full voice: it literally sent shivers up my spine. The entire cast of principals repeated the move in Act II, while Pangloss tossed sheets of paper filled with axioms from a first tier box to our left. (As a fringe benefit, we sat too close to see the supertitles, which normally can aid apprehension but in this instance were an unnecessary distraction.)

Afterwards, my friend and I were invited to a champagne reception on the Grand Promenade after the performance, where we mingled with cast members and City Opera staffers for the better part of an hour. The party came courtesy of City Opera’s Big Deal program, which, if you haven’t caught on yet, is one of the best deals in town for patrons under 40. And, with a free Time Out New York subscription and at least two parties every season, it practically pays for itself. So, think about City Opera the next time you’re planning to bring someone to the movies or a Broadway show. Sure, it might not be as glamorous as the Met, but the price is right. Not to mention a lot more fun.

A Real "Feast of Music" 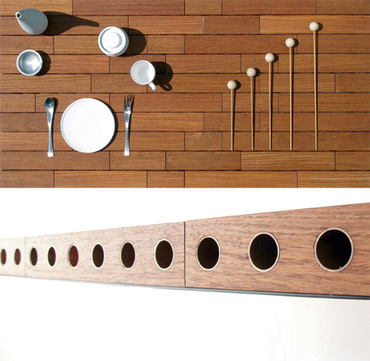 Japan's Fumiaki Goto has apparently invented a dining room table that doubles as a marimba. Go here for the full meal.

Even Better Than the Pope 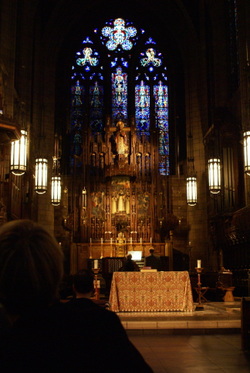 There are more churches with major pipe organs in New York City than anywhere else in the country, some of which rank among the finest such instruments in the world. Unfortunately, most of them only get played during Sunday services - and then only to pluck out hymns to accompany choirs and half-full congregations.

Fortunately, that leaves them open to Gail Archer, an organ professor at both the Manhattan School of Music and Barnard College, who's been playing a series of Olivier Messiaen organ recitals all around New York this year, in honor of the centennial of the composer's birth. This afternoon, she made he way to the Church of St. Vincent Ferrer on the Upper East Side to perform on their magnificent Schantz organ, installed in 2002. 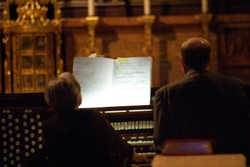 Archer played Messiaen's Mediatations on the Mystery of the Holy Trinity, a 90-minute cycle in nine parts which Messiaen wrote and first performed in 1972 at the Basilica of the Immaculate Conception in Washington, D.C. As with all of Messiaen's large cycles, the music vacillates between quiet and voluminous, between unbearable cacophony and tonal ecstasy. Archer, who played from a console in the center of the sanctuary, seemed completely taken over by it, though she refrained from showy gesticulations. With the organ blasting and the afternoon light streaming in through the startling blue stained glass windows, it was almost more than I could take. Certainly more powerful than anything happening at Yankee Stadium that same hour. 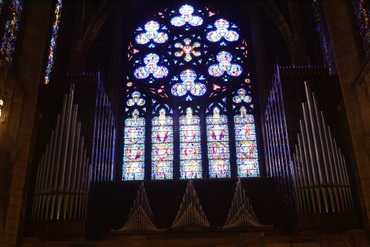 The final recital in Archer's series will be held at St. Patrick's Cathedral on May 29, where she will be playing Messiaen's late masterpiece Livre du Saint Sacrement (1985). (Un)fortunately, I'll be in Paris then, hearing that very same work performed at La Trinite, on the organ which Messiaen himself once played. (More pics after the jump.)

Continue reading "Even Better Than the Pope" »