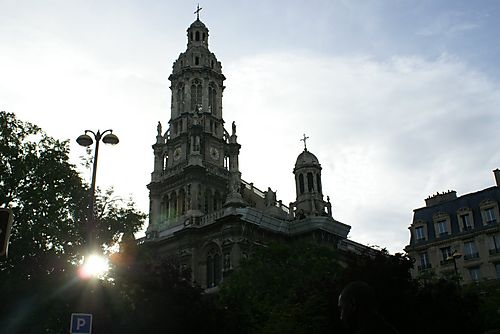 It will come as little surprise to regular readers that the main motivation for this trip - which has now brought me to Amsterdam, by way of Brussels - is to explore the music of Olivier Messiaen, who lived his entire life in Paris and would have been 100 years old this year. From the moment I left my canal-side hotel room this afternoon, I was confronted with billboards all over town announcing upcoming concerts of his music. The big show in town, however, is at the Musiektheater, where tomorrow afternoon, Messiaen's only opera Saint Francois d'Assise will open. Talk about a jarring contrast with the sex and "coffee" shops of the nearby Red Light district... 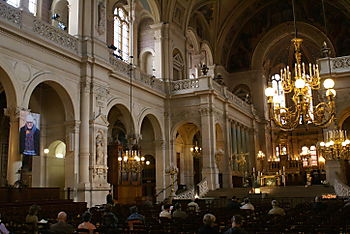 My personal journey through Messiaen's music began on Thursday in Paris, where the Church of the Holy Trinity (La Trinite) hosted three separate concerts throughout the day. When I arrived for the first concert around 12:30, the church was less than 1/3 full, which I suppose is understandable for a weekday but still difficult to fathom, given Messiaen's confirmed status as one of the great - if not the great - composers of the 20th Century. And, no place is more important to Messiaen's legacy than La Trinite, where he served as organist for 61 years. It was here that he tested out his musical ideas, here where he developed his spectral, technicolor sound that is so celebrated today. 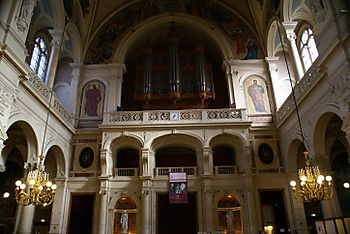 The 140 year old church is a beautiful, light-filled edifice, high and narrow. Hanging in the left side of the nave is a large poster of Messiaen, dressed in one of his typical rainbow-colored scarves. It reads: "In Memoriam: Olivier Messiaen 1908-1992." In the rear of the church was another poster showing Messiaen at the organ, advertising the series of concerts Trinite has dubbed "Un arc-en-ciel Theologique" ("A Theological Rainbow"), clearly focusing on the religious aspects of his music. As Messiaen himself would have wanted. 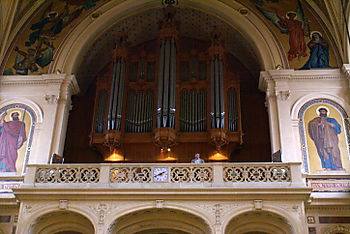 The day was a celebration of the Feast of the Holy Sacrament, and featured all of the music Messiaen wrote for this important day in the Catholic calendar. In the first concert, organist Loïc Mallié - a former student of Messiaen's at the Paris Conservatory - played Le Banquet Celeste and Offrande au Saint Sacrament - two early works that showed Messiaen at his most meditative. Maille followed it up with an extended improvisation on the plainchant Pange Lingua, which started gently but built into a holy terror of monster chords played at huge volume. His former teacher - who played his own improvisations after every Sunday mass - would have been proud. 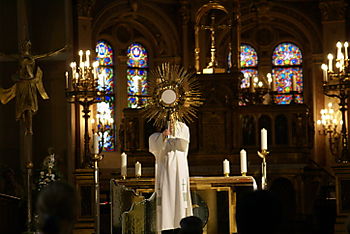 After a five hour break, I returned for the short choral work O Sacrum Convivium, performed by voice students invisibly situated up in the high reaches of the nave. On the altar sat a huge monstrance: a shiny brass decoration used to display the blessed sacrament. The rector of the church knelt behind the altar while the students sang the work twice, then held the monstrance aloft for the congregation to witness. Even for a non-believer, it was a powerful and moving spectacle.

The main event was at 8:30, when Mallié returned for a complete performance of Livre du Saint Sacrament, which Messiaen wrote when he was 76 years old, having just spent the previous eight years composing his mammoth opera Saint Francois d'Assise. Each of the 18 pieces that make up the work were introduced by Father Jean-Rodolphe Kars, who was originally a concert pianist specializing in Messiaen. As a result, the performance lasted nearly 2 1/2 hours, without any break. For those

who aren't familiar with the work, it runs the full spectrum of musical  effects: from near-silent to deafening, from gentle to terrifying. Mallié played it for all he was worth, and was given a warm ovation by the 200 or so who had gathered to hear him. He appeared at the rail with the score, holding it aloft and pointing to the sky. It was, without exaggeration, one of the most overwhelming musical events I have ever experienced. 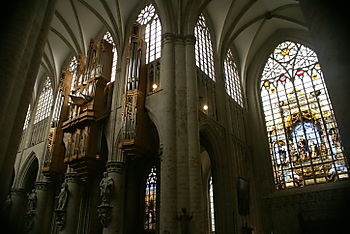 As if that weren't enough, when I arrived in Brussels yesterday, I stumbled into the Cathedral of St. Michael and St. Gudula where an organ concert just happened to be taking place; unfortunately, tourists seemed more interested in snapping pictures than stopping to listen. After a pair of Bach preludes, the organist launched into "Les Anges" and "Dieu Parmi Nous" from La Nativite du Seigneur, which shook the nave to it's core. After he was done, he left the organ loft - suspended fifty feet above the center of the nave - without applause. Well, there might have been one person clapping... 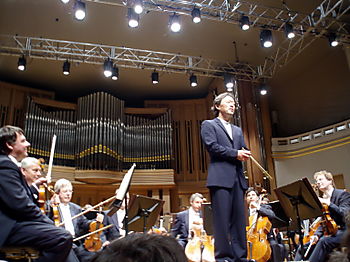 Then, last night, I made my way to BOZAR, Brussels' performing arts center, for a performance by the Dresden Staatskapelle with Korean-born Myung-Whun Chung, conducting. These guys are clearly awesome at the German classics - which they offered last night in the form of Beethoven's 5th and Mozart's 20th Piano Concerto (with Lars Vogt). But the opening work on the program, Messiaen's Les Offrandes Oublies, showed them at the height of their range: meditative, tender, enraged. At the end of the ten minute piece, Chung - who worked closely with Messiaen during the last years of his life and made several acclaimed recordings of his work - held his hand aloft for what seemed like a full minute, in silent and powerful tribute to the great master. (The Royal Concertgebouw Amsterdam site has a great video of Chung reflecting on his relationship with Messiaen.) 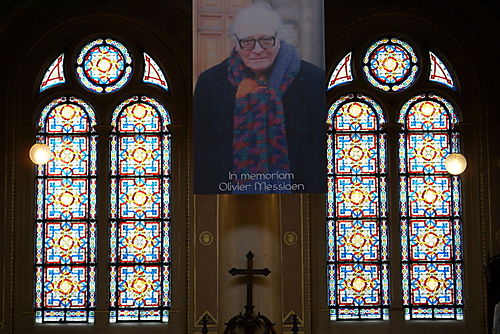 Off now to the Concertgebouw to hear the Netherlands Philharmonic Orchestra play Mozart and Tchiakovsky: not the sort of fare I normally go for, but the program is less important than the chance to hear a performance in one of the world's great concert halls. Will try to check in once more before I leave on Monday. (More pics after the jump.) 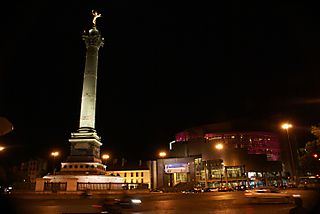 The Opéra de Paris can trace its lineage all the way back to 1669, when it was founded by Louis XIV - the builder of Versailles and other royal excesses - for court entertainment. By the 19th Century, the Paris Opera had become the leading opera house in the world, bringing composers to Paris from all over Europe. Weber, Rossini, Wagner were all here at the same time as Bizet, Berlioz, Gounod... 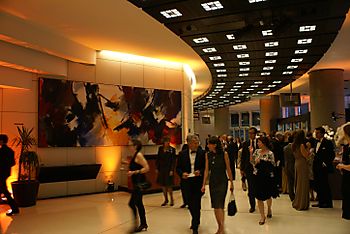 For over a century, the Paris Opera was situated at the Palais Garnier: a theater of gilded splendor built between 1860 and 1875 situated smack dab in the center of Paris. But, it's a relatively small house, holding just over 2,000 people: little more than half the size of the Met. So, in the 1980's, President François Mitterand broke ground on the Opéra Bastille: a thoroughly modern house facing the Place de la Bastille and it's monumental column in the eastern end of Paris. Putting the new opera house here was no accident: the Bastille is the populist heart of Paris and France, where the revolution was born in 1789. (The Bastille Opera opened in 1989, on the 200th anniversary of Bastille Day.) No small wonder, then, that Paris Opera director Gerard Mortier would be enticed to come to New York to direct our own "People's Opera." 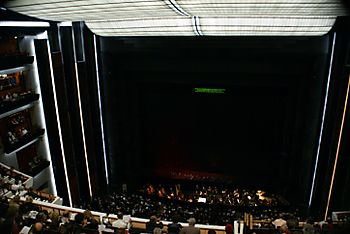 The Paris Opera still uses both houses, though it reserves its larger, more complex productions for the Bastille, which has close to 3,000 seats, all with great sightlines (if somewhat spotty acoustics.) And, while ticket prices can exceed 200 Euros, several hundred seats in the balcony are priced at less than 20 Euros for each performance. (This, too, is a policy Mr. Mortier has promised to bring to City Opera for the 2009 season.) 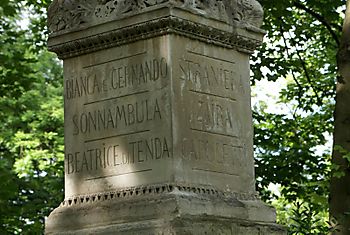 One name that occasionally gets omitted from the starry crowd of composers that came to Paris in the 19th century is Vincenzo Bellini: a contemporary of Donizetti's once seen as the rightful heir to Rossini's mantle. Sadly, he died at 32 in a suburb of Paris, and was buried at Père Lachaise, just a 10 minute walk from here. Nevertheless, he managed to produce ten operas in as many years, including repertory staples such as I Puritani, Norma, and La Sonnambula. 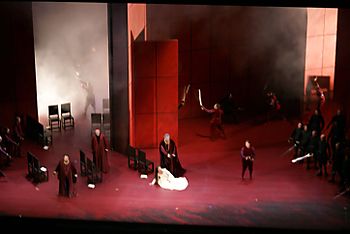 Last night, the Bastille Opera presented one of Bellini's lesser known works: The Capulets and The Montagues (I Capuleti e I Montecchi), based on the familiar story of Romeo and Juliet. Bellini wrote the score in less than six weeks, premiering it in Venice in 1830. Knowing Mortier's predilection for provocative productions, I was surprised by Robert Carsen's direction, which used period costumes and a slimmed down, almost minimalist set. Evelino Pidò, who led the first restored production of The Capulets and The Montagues in Paris in 1995, led the performance. 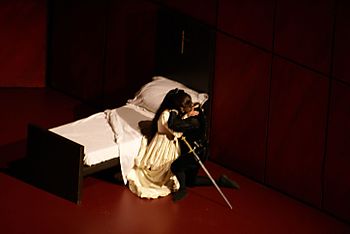 The music has its moments, but the chief draw last night was the starry cast, including tenor Matthew Polenzani as Tebaldo, mezzo Joyce DiDonato as Romeo, and superstar soprano Anna Netrebko as Juliet, making her Paris Opera debut. All were outstanding, but with her raven beauty and full, dramatic voice, Netrebko stole the show, eventually bringing the house down after her climactic Act II aria. Her passionate duets with DiDonato will no doubt leave opera fans whispering on both sides of the ocean; you'll have to wait till I get home next week to see my pics. Last night's performance was a gala for AROP (Les Amis de l'Opéra), which meant I paid twice as much as I normally would have for a seat in the upper reaches of the balcony. At least they fed me with free Charles Heidseck and canapés during intermission. Not to mention I was fortunate to have a seat period: all remaining performances of The Capulets and The Montagues are completely sold out. (More pics after the jump.)

There is more opera to come on this trip, but I'll have to make my way up to Amsterdam for that. As it is, my last day in Paris should provide one heck of an appetizer. 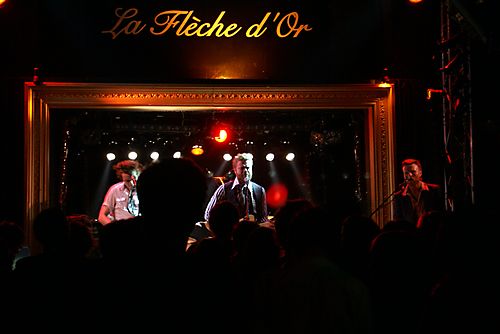 In between organ, orchestra, and opera events, there's plenty of time on the agenda to check out the nightlife here in Paris. Last night, I ventured out to La Flèche D'Or ("The Golden Arrow"): a rock venue on the far east end of town, situated in an old rail station. They've outfitted the place with stage lights and a velvet red curtain, to go with the gold framed mirror backing the stage. I saw two bands - one from Scotland, the other from France, neither particularly memorable - for no cover and just slightly overpriced drinks. The crowd was a mix of hipster and tourist, with a strange variance of age. Still, it was good fun for a Monday. 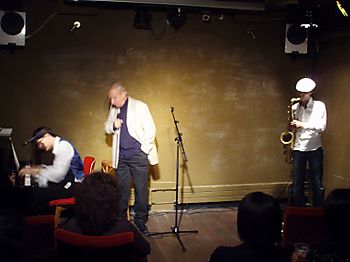 Tonight, I stayed local, stumbling upon some nouveau chanson at L'Ogre à Plumes up the street. The place bears a striking resemblance to Barbès, with a free-flowing bar and a backroom space that hosts just-this-side-of-whatever. (Here, though, they have a basement outfitted with red theater chairs.) It was all over-the-top theatrical, with veteran chansonnier Pierre Chante Debaude playing off his twentysomething comrades like they've working together for decades. I couldn't make out most of what he was saying; it hardly mattered. I capped the night with a stroll on nearby Rue Oberkampf, where I found a crazy Dixie band filling Bar Berlimer with a raucous din. There were fewer patrons than band members, but everyone was having a blast. Just another Tuesday night in the City of Light.

Back to business tomorrow night, with Bellini`s Capulets et Montagues at the Bastille Opera, starring Matthew Polenzani, Joyce DiDonato and Anna Netrebko. It's a gala, so guess I'll have to clean myself up a bit. (More pics after the jump.)