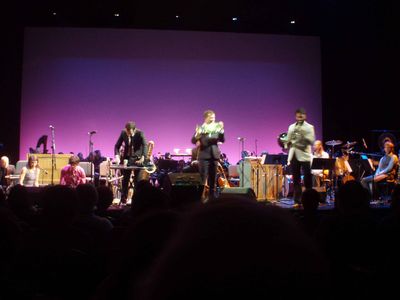 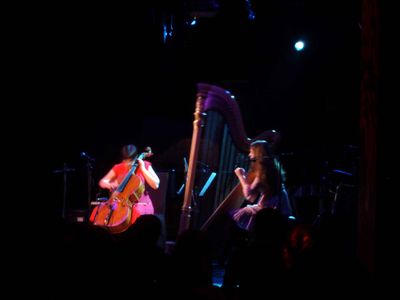 Story goes that one day, Emily Hope Price was at her apartment up in Washington Heights when she heard a loud banging coming through the floor above. When she stuck her head out the window, she saw it was harpist Bridget Kibbey, pounding the pedal of her 80 lb. instrument into the floor. So, Price grabbed her cello went upstairs, and they immediately started improvising together. And, thanks to Bethany and Concert Artists Guild, they got to share the results with a full house this past Tuesday at LPR. Prior to their jam - which landed somewhere between jazz and bluegrass - they each played their sets, with Price joined by accordionist Franz Nicolay and Joseph Brent joining Kibbey on mandolin. (More pics below.)

Continue reading "Not a Broomstick" » 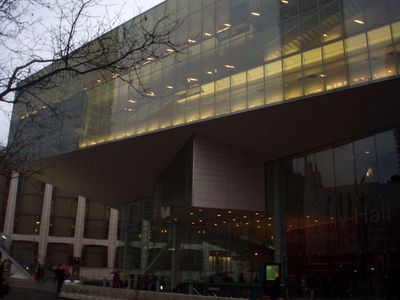 Pretty much the entire New York music world showed up at Lincoln Center Sunday night for the re-opening of Alice Tully Hall, the oft-maligned chamber music hall that's faced Avery Fisher's backside since 1969. Architects Diller Scofidio + Renfro opted to preserve the original building, though now with a modernist axe-chop cut into its Broadway corner. The entire facade is now sheathed in glass, with an open-to-the-public atrium that will no doubt become the popular new hang of concertgoers and Juilliard kids alike. It is as inviting a place as the travertine-clad hulks across 65th Street are foreboding.
But the real wonder is inside the hall. I was never a frequent visitor to the original Alice Tully: performances there always felt distant, cold, the stage at a vast point of separation from the audience. Now, the place feels like a womb: warm wood covers the walls, and the lighting - including LED lights that shine through the wood veneer - casts just the right glow.

What I'll remember most from this first concert, however, is the sound. To open the concert, viol player Jordi Savall and Hespèrion XXI performed three 15th century Sephardic songs: a reminder of the vast continuum to which this new space belongs. Not since my last visit to Disney Hall in L.A. have I heard a concert hall sound so clear and resonant: each time percussionist Lorenzo Alpert hit his small lap drum, the entire room seemed to shake. I could feel the bass deep in my chest.
As if to test out the hall's versatility, the rest of the program included everything from pianist Leon Fleisher playing Bach, to the Brentano String Quartet playing Beethoven, to Osvaldo Golijov's Mariel, performed by cellist Maya Beiser and marimbist Tomoya Aomori. (There was also an out-of-place performance of Stravinsky's Octet for Winds.) All sounded terrific. 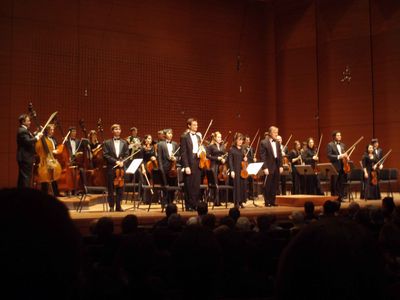 The concert ended with a chamber orchestra comprised of members of the Chamber Music Society and the Juilliard Orchestra playing Stravinsky's Pulcinella. St. Louis Symphony director David Robertson, who flew to New York just for this performance, personally thanked architects Elizabeth Diller and Ricardo Scofidio onstage, reminding the audience that, "For musicians, the place we play is the most important instrument of all."
Thanks, Lincoln Center. You've given us a great new home for music. Can't wait to see what you do with your other halls. (More pics below.) 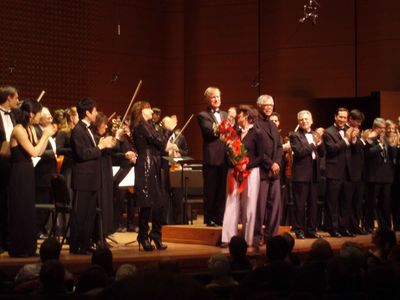