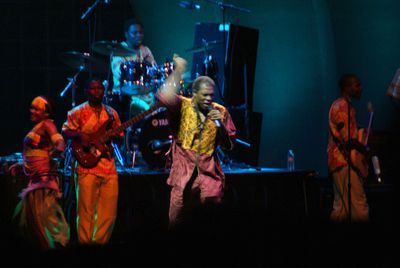 It was welcome release from all the Michael Jackson hoopla to have Celebrate Brooklyn to go to last night, for a free show by Femi Kuti, oldest son of Afropop pioneer Fela Kuti (and brother of Seun Kuti.) The bandshell was pretty much packed for Kuti's energetic two hour set, which also featured his backing band The Positive Force, including brass section, guitar, keys, drums and a trio of female dancers whose gestures left little to the imagination. More than once, Kuti stopped to rant about sexual or government politics, but it was all with a sense of humor and never long from getting people back up and dancing. (More pics below.) 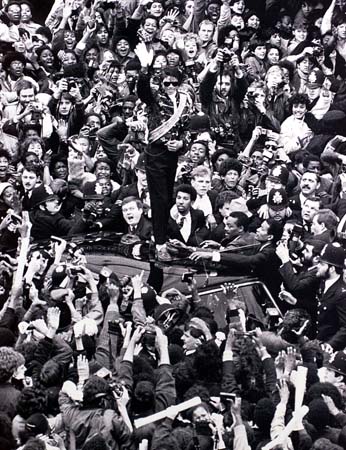 I was a bit taken aback by the immediate and overwhelming reaction to Michael Jackson's passing earlier today. To be frank, I didn't understand it. Really? Michael Jackson? I mean, I liked him enough when I was a kid, but he hasn't exactly been the most relevant, innovative artist of our new millennium.
But then, I got home, and I checked my Facebook page. And my Twitter page. Any my Gmail. All were crammed with messages, tributes, clips. And, not from just anyone: composers, musicians, friends whose taste in music doesn't usually run the way of Top 40 radio. So, what gives? What is it about this oft-troubled man whose sudden death has provoked such an extreme and broad response?
The answer, of course, is that Michael Jackson's music had universal appeal. I mean, the numbers are just staggering: 13 number one hits, 750 million albums sold - including Thriller, which, at 100 million units-plus, is by far the best selling LP of all time. (No album has ever sold even half that.) By the close of the 20th century, he was the world's most celebrated entertainer, the self-proclaimed "King of Pop." But, truly, he transcended category, and his influence on everything from rock, to hip hop, to R&B, is incalculable.

Then, there are the live shows. I never had the chance to see Jackson perform, but anyone who's seen footage of one of his packed stadium shows can't help but be blown away by the sheer spectacle he managed to produce. Jackson had the whole package: voice, moves, a pitch-perfect sense of stagecraft. People went crazy for him, the way they once did for Sinatra, Elvis, and the Beatles.

Here, too, Jackson's legacy looms large. And, not just among obvious offspring like Janet or Justin: he's in everyone from Thom Yorke, to Zach Condon, to every flamboyant indie front man who claps and dances onstage. Tonight, they should all take a good look at themselves in the mirror. And thank Jackson for holding the door. 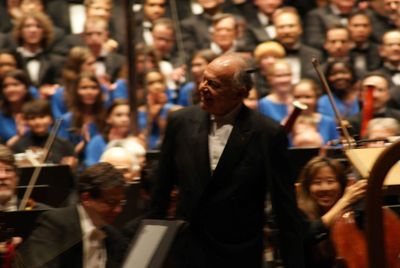 I've covered eight concerts Lorin Maazel has conducted over the past two-plus years, and have seen him at least a dozen other times over the past decade, both with the New York Phil and the Bavarian Radio Symphony Orchestra. Admittedly, the old man - Maazel turns 80 next year - won't win any awards for podium pyrotechnics, the way some others might.

But, that's not why the Phil hired him, nor why institutions like the Vienna Phil invite him back to conduct every year. Simply put: Maazel knows his stuff. Ask anyone who's ever played under him: when he's on the podium, he won't let things slide off the rails. He knows how to keep things under control - and just when to pull the trigger.

Which is essential when you're conducting Mahler, as Maazel has done many times over the years. In fact, Maazel has managed to conduct nearly all of Mahler's symphonies over the past seven years with the NY Phil, save for one: the 8th. And so, when the Phil asked Maazel what he'd like to conduct on his final program as music director, it doesn't take a genius to figure out his response.

I've only seen this massive symphony for chorus and orchestra performed one other time: during James Levine's first concert as the music director of the Boston Symphony, at Carnegie in 2004. It requires a ridiculous battalion of performers: eight solo vocalists, double chorus, children's chorus, and an orchestra of well over 100, including organ, harps, celesta, bells and chimes. The symphony is split between a setting of the hymn Venir, creator spiritus and the final scene from Faust. It's pretty over the top and about as far from subtle as you can get, but there's enough tonal complexity in the scoring to keep it interesting.

As I sat listening to the tremendous closing minutes, I suddenly realized that I was in the middle of a genuine moment: a pure memory of something I'll always be glad I was there to see. And hear.

Godspeed, Lorin. Hope to see you back here sometime soon. (More pics below.) 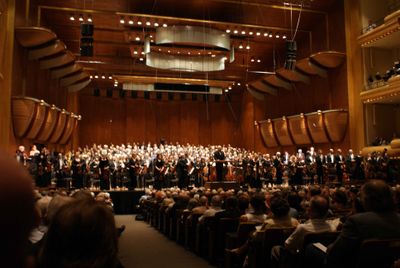