My knowledge of Canadian country music is pretty much limited to Shania Twain, but there was a large and enthusiastic crowd last week on Granville Street in Vancouver for a free daytime performance by emerging and established Canadian country artists such as Jessie Farrell, Victoria Banks, Terri Clark and Doc Walker, all in town for Canadian Country Music Week. Among the standouts were Scottish-born, Toronto-bred Johnny Reid, who sang with a big, heartfelt voice that almost made you overlook his bleached tips. (Reid went on to win 5 awards at Sunday's Canadian Country Music Awards, including album of the year.) But it was 29-year old Jason Blaine who summed up what most in the crowd already knew:

"Canadians are the best country fans in the world, and the best people in the world," he said. "But, there's nothing greater in the world than a Canadian girl." (Insert sound of 1,000 screaming girls here; more pics below.) 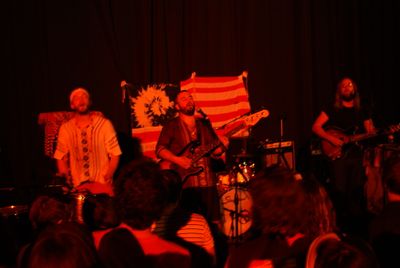 It's funny how sometimes you need to travel 3,000 miles to experience something that's been hiding out in your own backyard for years. Last night, experimental folk trio Akron/Family - long-time denizens of the Williamsburg underground - headlined Portland's Bagdad Theater (sic): a beautifully restored movie palace in the arty Hawthorne section of town that now hosts occasional concerts and other events.With capacity somewhere around 3,000, it was a far cry from spots like Death By Audio, but Akron/Family must be getting used to playing these sort of massive spaces: they were at Bumbershoot on Monday, and APW earlier this summer.

Their sound is trippy and psychedelic, quiet and orchestral: a throwback to the classic rock of the late 60's (driven home by Seth Olinsky's Jimi-style blues guitar.) As if to drive the point home, they all wore dashikis; a homemade American flag hung above the stage, the blue field filled with a tie-dyed pattern. Indian blankets hung over all the monitors; on one was Walt Whitman's portrait. They sung of following your dreams, of living freely. Clearly, they seek to resurrect the more idealistic America of our parents: a mission that would seem to play perfectly in a place like Portland, which still embodies the that open vibe nurtured in places like San Francisco, about nine hours south.

"We love this town," drummer Dana Janssen said at one point from the stage. "So much so that I might move here."

But, it wasn't all flowers and rainbows. Towards the end of their 90 minute set, bassist Miles Seaton unleashed a primal scream into a pair of mics that was both tterrifying and exhilarating, making everyone stop dead in their tracks. A potent reminder of the power of a single human, unleashed.

After leaving everything they had out on stage, the band asked the audience to clap and sing along with the encore, which felt less like a burden than a benediction. The words speak for themselves:

"I've traveled all around this country past 28 years

I've traveled all around this country past 28 years

I've traveled all around this world past 28 years

And I've found out where I want to live.

That is where I'll lay my head and call it Home." 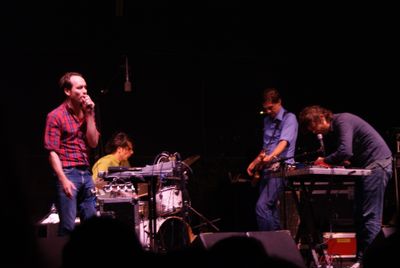 After a long, meandering Sunday out in Seattle's damp, fall-like weather, my Bumbershoot closed with a trio of memorable acts, bookended by No Age's lo-fi intensity and MSTRKRFT's rave-like dance party. But Toronto's Holy Fuck, who played the outdoor stage on Broad Street, was something else altogether. They have a drummer (Matt Schulz), a bassist (Matt McQuaid) and a pair of multi-instrumentalists (Brian Borcherdt, Graham Walsh) who play a variety of keyboards and tabletop electronics. The only lyrics are occasional and nonsensical, sung through distorted mics (something they share with their UK namesakes Fuck Buttons.) From the minute they hit the stage, they were a bundle of energy, jumping and twirling around to their self-made beats.

But, there was something else going on here. The music was complex and well-built, closer to electro-acoustic than indie-electronic. At quieter points, their sound bordered on experimental; at others, funky groove. For all their onstage dancing, it was clear that these are some serious musicians, after much bigger game than your typical indie kids.

They closed with their soaring anthem, "Lovely Allen," which begins with a simple, synthesized theme before the drums and bass come crashing in, sending everyone into ecstatics. They let the music die out, then built it up again to an unbelievable crescendo, filled in with layer-upon-layer of sound, too many to decipher in a single hearing. It was so pretty and profound, it was almost impossible not to tear up. Simply put, one of the most transporting musical experiences I've ever had - including those I've had in concert halls.

There is something curious about the fact that a band with the name Holy Fuck is capable of these sorts of transcendences. No doubt they've been told by countless record company execs/father figures that their name is an obstacle to success, that they should call themselves something more family-appropriate and cash in. (To wit: they were denied a Canadian arts grant because of obscenity laws.) Is it that they just don't care? Or, are they arrogant enough to believe that what they've tapped into is so deep and powerful that eventually people will have to start saying their name? And that, by so doing, we'll all be a little less uptight and self-restrictive?

Say the name. Say it. Again.