After Thursday night's CMJ marathon, I was looking for something a bit more low-impact last night, so I headed back to the L.E.S., starting out at The Suffolk for the Matador Showcase, where Harlem played an early set of garage that was sloppy and fun. Or, maybe it was the free Magic Hat and PBR. 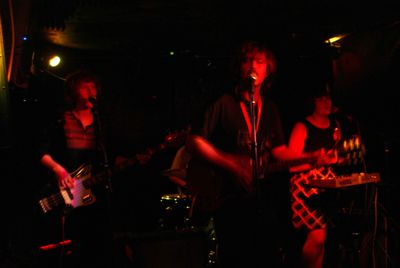 Telling myself I'd be back later for the killer lineup to come (Lemonade, Cold Cave, Ted Leo), I ventured across Rivington to Fat Baby: a cozy little basement with vintage lamps and zebra-print wallpaper. Holding court was Vancouver's quirky, delightful Mint Records, with a great lineup of Canadian acts rarely seen in these parts. Victoria's Immaculate Machine played pretty, earnest pop that recalled their fellow BC natives New Pornographers. They were led by the engaging Brooke Gallup, who looked like Doug Henning with his mustache and flowing red hair. Suddenly, it struck me that this is what this festival is all about: 30 people in a Lower East Side basement, listening intently to a five-piece band from an island 3,000 miles away, dropping in on their way back from Europe. It reminds you that music is all cut from the same fabric, no matter how distant. 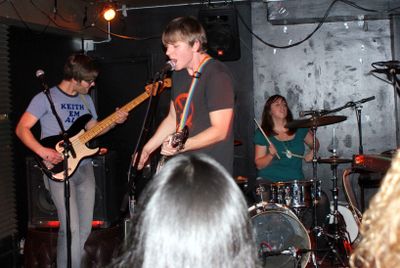 "Is anyone here even from New York?" asked Chris Connelly,  lead singer of Edmonton, Alberta's Hot Panda who followed. (About 1/3 of the crowd cheered.) In between their lo-fi pop, Connelly told us the band was on their second day without sleep, having just driven 15 hours from Halifax, where they played the Pop Explosion Wednesday night. "We're fueled by the power of rock!" he exclaimed, earnestly.

After getting locked out of Lemonade at the Suffolk, I made a beeline straight back to Fat Baby, in time to catch Vancouver's The Pack A.D. Comprised of drummer Maya Miller and singer/guitarist Becky Black, they were - on the surface - like the female version of Japandroids, except their sound was more Stooges than emotive pop. Black - who's quite the looker with her raven hair and tight jeans - jumped all around the stage, her throaty voice full of bluesy vibrato. And, they too are headed to Halifax, playing a show there tonight. Damn, these Canadians have a lot of energy! 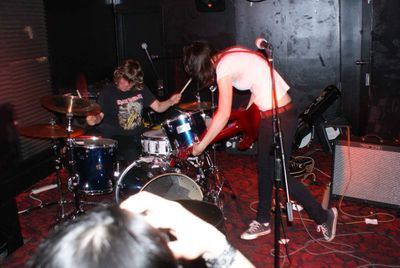 Speaking of that other Vancouver duo, they actually played Bell House last night at 1am, which I intended to make after a quick nap at home. Unfortunately, that quick nap turned into a much-needed 8 hours. Oh well, its not like I haven't seen them before.

Headed out now for the day parties on the LES, followed by a run over to Williamsburg for the Showpaper benefit at Market Hotel. Most of the stuff today is FREE, so get off your couch and get out there. (More pics below.) 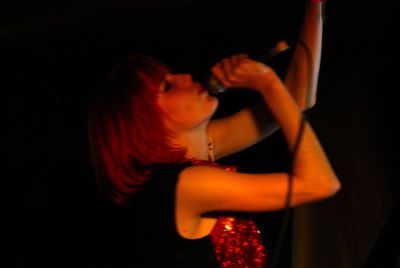 Day 3 of CMJ started out at The Delancey, where Reni Lane kicked things off in the basement around 7pm, With her bright red hair and matching sequined dress, she definitely has things down in the looks department - too bad her stage presence (or backing band) didn't rise to the same level. I mean, is it ever a good idea to cover Blondie's "Heart of Glass" in NYC? 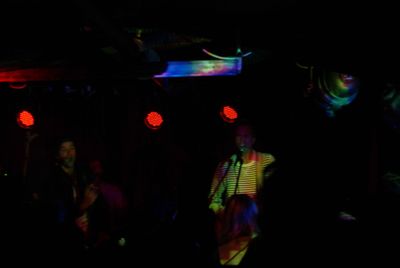 She was followed by Suckers, who played trippy psychedelic rock with plenty of reverb and lights to match. They had a soothing, mellow vibe, filled with cooing vocals that occasionally slipped into falsetto, reminding me of 1990's Brit band Spacehog. Unfortunately, that wasn't enough to keep me around for their full set... 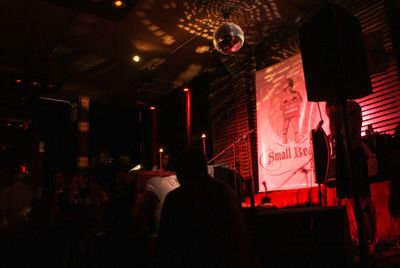 Because, actually, the more interesting scene was upstairs, where Paul Wallfisch was holding his regular Small Beast, just like he does every Thursday in the bar area. Pete Drungle played a 40 minute improv set on Wurlitzer, accompanied by drum box and Theremin. It was both soothing and exotic, a welcome respite from the all-around aural assault. I wonder what the out-of-town indie kids thought of it. 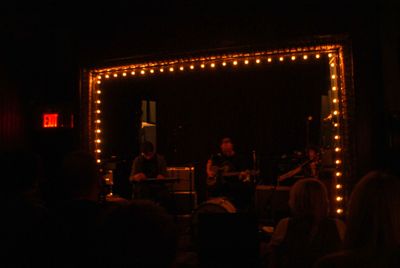 From there, I hopped the M train out to Williamsburg, walking up to Union Pool for the Arts & Crafts (and friends) showcase. Toronto's Timber Timbre played soft and low via violin, guitar and slide that shimmered like an out-west desert sky. Lead vocalist Taylor Kirk sounded like the tenor version of Leonard with his hushed, dark vocals that held the packed room completely in thrall. 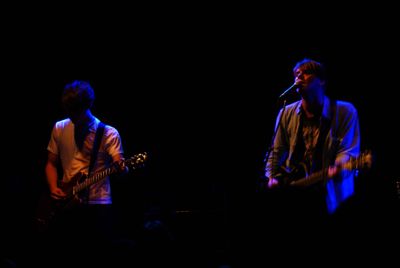 By contrast, Goldhawks filled the Music Hall of Williamsburg with sunny guitar rock that felt more American than any band I've seen this week. Small detail that they happen to be from the UK. 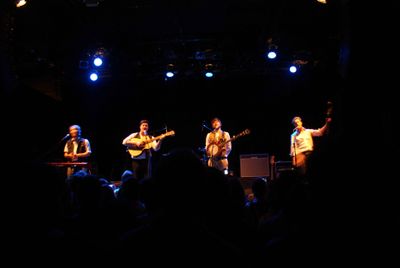 They were followed by Mumford and Sons: another UK outfit unfamiliar to me by recommended by several friends. They turned out to be the highlight of the night, ripping through a set of tight, bluegrass-tinged rock that sounded like a miraculous union of the Punch Brothers and Coldplay. Lead singer Ted Dwayne was completely charming in his stage banter, looking like a character straight out of "O Brother Where Art Thou?" with his mustache and vest, his soulful, honeydripped voice soaring above the banjo and upright bass. The packed house was clearly in on the secret, whooping and hollering throughout. Great show. 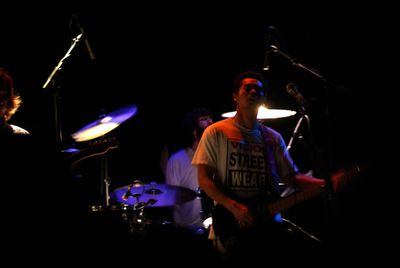 Closing out the bill at MHOW were Aussies The Temper Trap, who are among this moment's indie darlings, gracing the cover of this month's CMJ Magazine. Their vibe was melodic and dancey, but Chris Mandagi's vocals were shrill and overpowering - and not in a good way. The last straw for me was "Sweet Disposition," where they nakedly ripped off The Edge's guitar riff from "Where The Streets Have No Name." 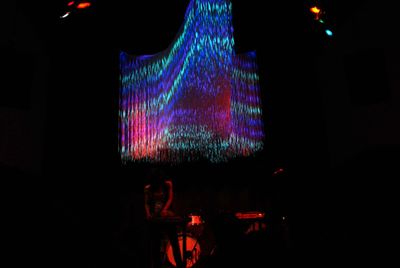 Walking back towards the G train, I stopped in the Cameo Gallery, situated like a speakeasy in the back room of a restaurant on N. 6th St. Imagine my wonder when I stumbled upon L.A. duo Voices Voices, playing experimental noise underneath a fiberoptic sculpture lit up like an acid rainbow. If it weren't for the pictures, I couldn't say for sure it wasn't some kind of fever dream. 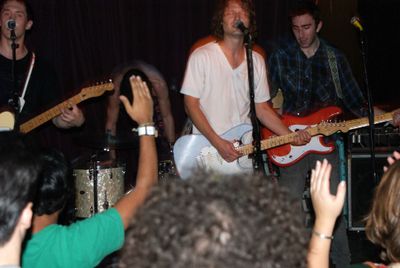 Eventually, I ended up back where I started, catching the midnight set at Union Pool by Montreal's Hollerado. Terrible name, but fun band, full of retro guitar riffs and straight up harmonies. Which, at that stage of the evening, was exactly what the doctor ordered.

Back out to the LES tonight, with a hopeful nightcap somewhere closer to home. (More pics below.) 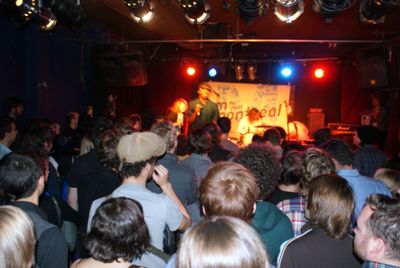 I spent day two of CMJ bumping around the L.E.S., which boasts the highest concentration of venues, both established and temporary. Ground Zero last night was Arlene's Grocery, which hosted a showcase hosted by M For Montreal, featuring no fewer than six bands from La Belle Ville. Silly Kissers played techno-pop, fronted by a girl and boy in white face paint and a guitarist who bumbled his way through some silly stage banter. Beast was dominated by the diva-like Betty Bonifassi, but felt otherwise disjointed. Think About Life were just as engaging as when I last saw them in Toronto back in May, but the dance-averse NY crowd left things feeling flat. (My guess is they'll see a whole other league of crowd response tonight during their appearance at the Halifax Pop Explosion.) Francophones Malajube played proggy hard rock with high energy and verve. (Unfortunately, I had to run before catching the explosive Annie-Claude and Duchess Says, who went on around 1230a) 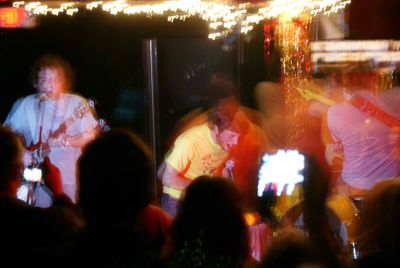 Having a pass allowed me to wander off between sets, so I was able to catch Drink Up Buttercup's wild, aboriginal set at Cake Shop. When guitarist James Harvey broke a guitar string, he compensated by bringing the band out into the audience to perform a capella, with drummer Farzad Houshiarnejad keeping time by banging on a trash can lid with a maraca. (He later borrowed a guitar from the next band.) From there, I wandered over to Piano's, where I saw These United States' play some quicksilver roots rock, whose lead singer, Jesse Elliott, ended up most songs completely out of breath. 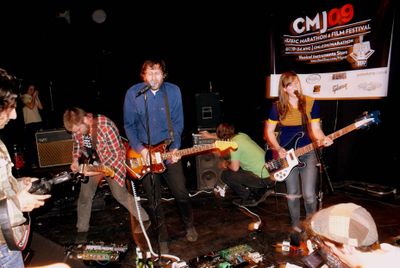 But the big discovery last night was a band I just happened to stumble upon: Norway's Megaphonic Thrift (pictured above), who tore through a 45 minute set at the Suffolk Back Room (a.k.a. the CSV Cultrual Center). They were like a cross between Built To Spill and Yo La Tengo, fronted by the Doug Marsh-like Richard Myklebust on vox and guitar. All I can say is: Wow. If you missed them, they're playing one final show this Saturday at Glasslands before heading back across the pond.

Apologies to my friends at New Amsterdam/Canteloupe for missing their dual-showcase at LPR last night, but when I'm in festival mode, new music isn't really what I'm jonesing for. I'll come back and hear you guys soon.

Out to Williamsburg tonight - hope to see you out there. (More pics below.) 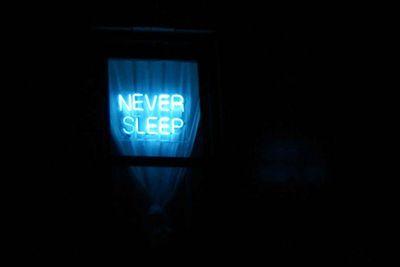