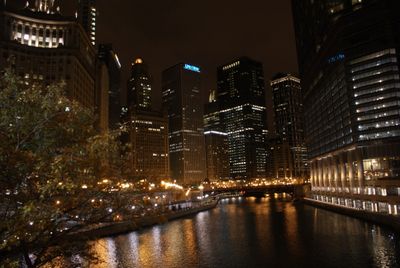 Greetings from Chicago, where the weather is cool and clear, and every door feels open and inviting. I came here primarily for a football game (sadly, my team lost), but there's a range of musical events to fill the rest of my time here: everything from the CSO, to tonight's double bill of Tortoise and Wilco (!)

Prior to having to decide between those pricey tix, I found myself at the Chicago Cultural Center this afternoon for a free performance of Brad Shepik's "Human Activity Suite": a major, large scale work for jazz quintet featuring Shepik on guitar, Tom Rainey on drums, Ralph Alessi on trumpet, Drew Gress on bass, and Gary Versace on accordion/piano. Speaking before the performance, Shepik explained that the suite is about climate change, with each section written for a particular continent. "Lima," with its dancing accordion, represented South America while the tribal and primitive "Blind Spot" spoke plainly to North America's global climate contribution, sounding like one of Varese's exercises in sonic terrorism. The soft, dirge-like "Stir" began with the bass bending low before turning ethereal and melodic. "Blue Marble," which supposedly represented Africa, had all the vestiges of Chinese classical music. Finally, the group let it rip in "Carbonic," full of atmospheric grooves that hinted at Miles yet claimed their own distinct soundscape. This was playing and composing on the highest level: one should expect nothing less of the Windy City. Now, if I can just figure out what to do with the rest of my evening... 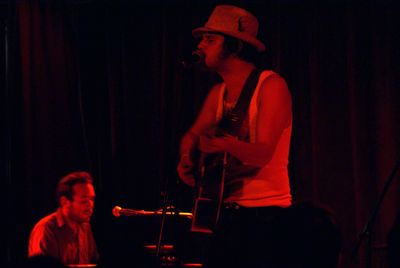 I've been a big fan of Langhorne Slim for at least a couple of years now, having caught his heart-on-sleeve roots rock everywhere from Austin to Brooklyn (and back.) So, when I heard he was playing Bell House this past Thursday, I had to stop by and check it out. Before long, he had a good portion of the crowd up and dancing, many of whom stiopped by the merch table afterwards to pick up a copy of his new release, Be Set Free.

Langhorne and the band will be out on tour for the next couple of months, but stop by LPR this Monday if you want to catch his new keyboardist leading a certain band I've mentioned here once or twice before. (More pics below.)

Music of the Future 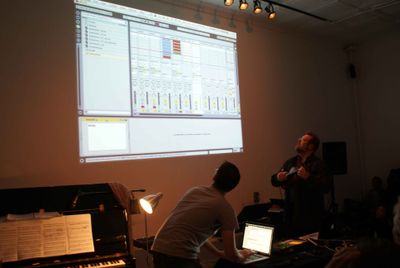 When he coined the term "Music of the Future" back in 1860, Wagner was primarily concerned with defending his musical innovations over what he saw as the florid and artificial conventions of the time. But his compositional process was essentially no different that any other 19th century composer, deferring technological innovation to his massive operatic productions.

But, what if technology could influence the compositional process itself? What if there was a computer program that allowed a composer to realize fully formed musical ideas the moment they popped into his/her head? What if they could then manipulate those pieces in the moment of live performance?

This is not science fiction: this is the current reality of composers and musicians all over the world, thanks to a pair of remarkable computer programs: Ableton Live and Max MSP. The two companies co-sponsored last weekend's MMiX Festival of Interactive Music Technology at Theaterlab on 14th Street, which featured workshops, sound installations and live performances by a range of artists who use these programs in their music.

I went on Saturday, and walked right in on Todd Reynolds and Luke DuBois' demo of Max For Live: a new patch that allows Max to interface with Ableton, giving performers/programmers the best of both worlds. Showing off features like the "Buffer Shuffler" and "Loop Shifter," Todd was like a kid in a candy store, his enthusiasm infectious even if what he was talking about went completely over my heard. No matter: the results speak for themselves. (See here for my post about one of his Ableton performances at Issue last year.)

After an interval that allowed festivalgoers to interact with the sound installations or mingle in the bar, Patrick Grant and Kathleen Supove performed live in the space, accompanied by projections and electronic effects. Best of the lot was Supove's performance of Jacob TV's "Body of Your Dreams," which remixed an infomercial about an electronic gadget with miraculous toning powers while Supove played a piano that was alternately spiky and tender. If only Wagner had tools like these...(More pics below.) 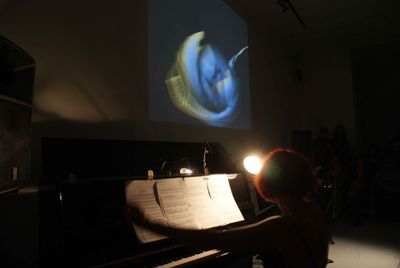 Continue reading "Music of the Future" » 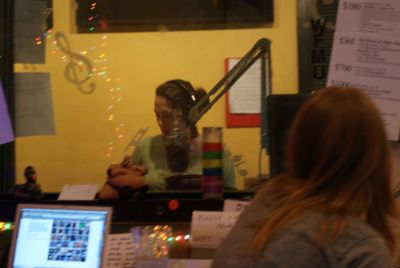 Here's another one for the books: after 8 1/2 years, Bethany's decided to hang up her WFMU mic so she can complete her training as a massage therapist. In an email earlier today, she sent out some stats for the Stochastic Hit Parade:

I was a bit late to the Stochastic party, but for the past two years, Bethany's provided the soundtrack to my Sunday nights, exposing me to more new and different music than anyone I've ever met, on or off the air. (She's also woken up the neighbors at least twice.) She says she's planning to come back to the air in a year or so, but until then, Sunday nights will never be the same.

For tonight's final show, Bethany will no doubt have a few sonic surprises up her sleeve. Tune in to 91.1 FM (or wfmu.org) at 9pm and listen for yourself.