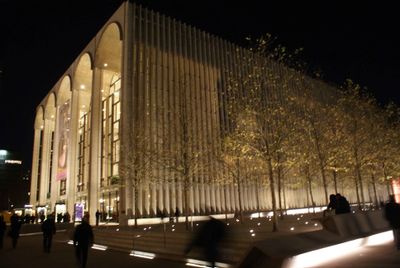 The local critics have been fawning all over the Met's new production of Janáček's From the House of the Dead - Alex calls it "one of the finest things the Met has ever done" - so I decided to stop by on Saturday night to see what all the fuss was about. The opera, based on Dostoevsky's novel about life in a Siberian prison, is unusual in a number of respects: there is no main character, no discernible plot, and no female characters - except for those the prisoners speak of in reminiscence. The performance, which was without an intermission, lasted less than two hours.

The music, which was written in 1928, is classic Janáček: full of driving rhythms and melodies written in an almost childlike simplicity. The production, by French director Patrice Chereau, was both stark and captivating, with some startling dramatic flourishes amidst the general bleakness. Esa-Pekka Salonen, making his Met debut, conducted with everything he had, fully aware of the stakes at hand. And the performers - especially Peter Mattei (Shishkov) and Willard White (Gorianchikov) were all strong.

Still, I left the house feeling empty and cold. This is an opera that's hard to like, and even harder to understand. Guess that doesn't make me much of a critic, does it? (More pics below.) 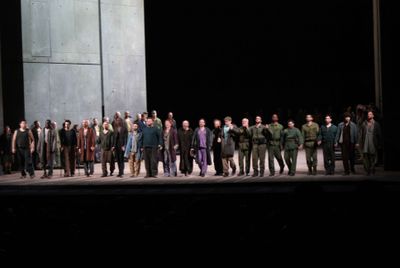 Well, better late than never, I guess. Free drinks? That could be dangerous...

"From Gesualdo to Golijov, Q2 puts you in the room with some of the most beautiful music being created today and relates it to its wellspring. Visit online for playlists and programs, and tune in to the music you crave."

Hey, 'QXR - did you check in with White Castle?

All In The Family 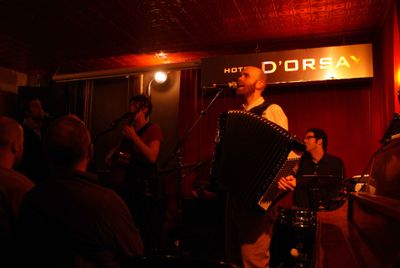 Those Slopers who didn't have to hightail it to Grandma's yesterday were treated to what amounted to a home show at Barbes by Becca Stevens, who sang with both bands on the bill: Alex Hills' Buy My Book and her own Becca Stevens Band. In case things weren't cozy enough in the back room, before passing the bucket Bethany called out all her friends in the room by name (myself included). I thought I'd stumbled into a Frank Capra film.

Becca - who I regrettably haven't seen for almost a year - sounds more and more to me like a young Joni Mitchell, which only leaves me eager to hear what she'll sound like 10, 20, 30 years from now. Whether or not she'll still be performing her irresistable cover of Animal Collective's "My Girls" then is anyone's guess. (More pics below.)

Continue reading "All In The Family" »

It Ain't All Turkeys 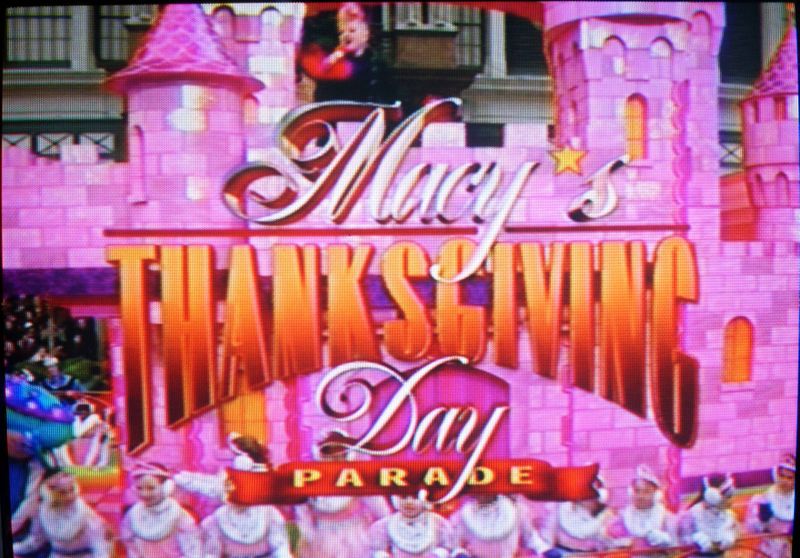 Ah, Thanksgiving: that uniquely American celebration of food, football, and general fatuousness. And, what better way to start the holiday than with the 83rd annual Macy's Thanksgiving Day Parade, right here in NYC. Sure, it's mostly crass commercialism designed to get you to buy more Hamburger Helper or Pillsbury, but amidst all the high school marching bands and Broadway musicals, there were some genuine musical jewels. I mean: The Roots? Ziggy Marley? The Pizzarelli Quartet??? And, hey, any parade with Cyndi Lauper in it is cool in my book.

Maybe next year I'll even get off my couch and check it out in person...(More pics below.)

Continue reading "It Ain't All Turkeys" »