Are there any miracles left in the modern world? Is the concept of musical genius - represented by flawless technique and effortless execution - nothing but a myth? Can our digitally-inured society even still recognize raw talent in its pure state?

To all those who question the full capacity of human ability, I have but two words: Cameron Carpenter. Cameron, 28, is an organist whose facility and flamboyance on the King of Instruments defies description. He blew me away when I saw him last October at Trinity, and continues to blaze his way through organ lofts everywhere from here to Moscow. When I heard he was performing this past Saturday on the Aeolian-Skinner organ at the Church of St. Mary the Virgin, I made a point of being there, despite the surrounding horror known as Times Square.

The church was packed when I arrived halfway through the concert on Saturday (I was held up by Alex Waterman's performance that same afternoon), and filled with microphones, all recording the event for Telarc. He played five Bach preludes and fugues, followed by his own Serenade on the name B-A-C-H, followed still by three encores. All you could do was sit and shake your head at the majesty of it all.

Cameron has said more than once that he wants to bring this music to a wider audience through his showmanship - though, to be honest, his glam rock look is more Diane Bish than David Bowie. No matter: he'll be turning them away by droves before long with his talent alone. (More pics below and here.) 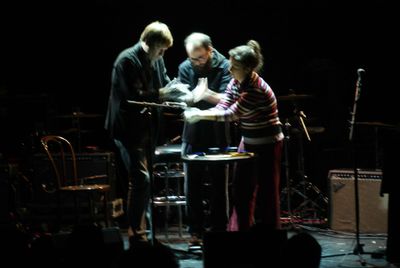 I'm not sure if three performers rubbing Nivea Cream into their hands qualifies as music, but the bill for Saturday night's A Fantastic World Superimposed On Reality (part of Performa 09) generally steered clear of visual art provocation. Joan La Barbara, one of the great singers of the American avant-garde, performed two of her early works for live and recorded voice: October Music (1980) and "Fire Dance" from Shaman Song, which had her singing over a jungle of recorded animals. Tony Conrad, one of the founding fathers of minimalism, played a fierce violin looping over himself. And pioneering turntablist Christian Marclay, who developed his vinyl technique before hip hop, exchanged recorded banter with Shelley Hirsch's live vocals.

The highlight of the night, though, was an appearance by the reunited Airway, who initially formed in L.A. in 1978. With three drum kits, a brass section, a keening lead singer, electronics and guitars, they created a massive wall of sound approaching My Bloody Valentine-sized volume. I couldn't help thinking these aging dudes could show their noise rock neighbors a thing or two.

Less successful was the anti-rock experiment Destroy All Monsters, originally put together by visual artists Mike Kelley and Jim Shaw in Detroit 36 years ago. The band achieved some notoriety in the late 70's when they added personnel from The Stooges and the MC5, but left to their own devices, Kelley (who made random noises on various toys) and Shaw (who sang gobbledigook via Skype from L.A.) produced the musical equivalent of a fart joke. Not that that stopped the art crowd from fawning all over them.

P.S. For any of your art types who had your ears piqued and want to hear more of this music, just go here. (More pics below and here.) 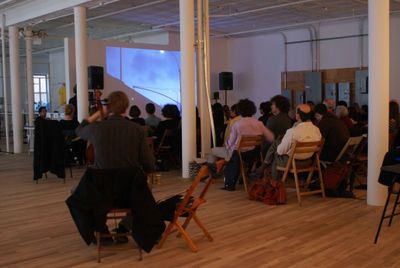