It may only be a four-hour bus ride from Nashville, but the music of Memphis could hardly be more different than its country-and-bluegrass neighbor. Memphis is the cradle of the Blues, the place where musicians like W.C. Handy and B.B. King would graduate to after playing the juke joints of the Mississippi Delta. It's a very different scene on Beale Street these days, with most bars featuring tourist-ready bands playing old covers - though I did manage to find a solid cat named Vincent Johnson at the Beale St. Tap Room before turning in for the night. (If I'd had a car, I would have ventured out to the clubs in Midtown, looked to be more the real deal.)

Of course, Memphis is also the birthplace of Rock and Roll, home to Elvis, Carl Perkins, Sun and Stax Records. From what I could tell, there isn't much of a rock scene here anymore - though I did read in the Memphis Flyer that some local bands joined together to host a SXSW showcase just last year. Wish I had another night to explore it further, but it's time to head south. (More pics below.) 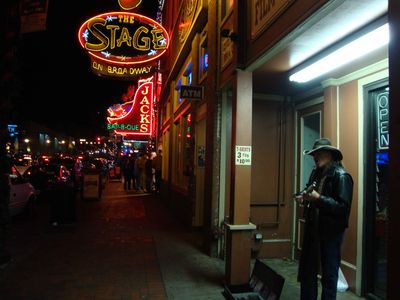 Greetings from Nashville - or, as it's more commonly referred to down here, "Music City." I arrived here last night just as the Titans were wrapping up their loss to the Chargers over at LP field, and the honkytonks on Southern Broadway (a.k.a. SoBro) were starting to heat up. I eventually settled in at Tootsie's Orchid Lounge - the self-proclaimed "#1 honkytonk in the world" - where Willie Nelson landed his first songwriting gig and Tim McGraw played in public for the first time.

Last night, a black-hatted local named Scott Collier played an extended set of songs by favorite sons such as Merle Haggard and Johnny Cash, working only for tips: $20 got you a request; $150 would get you "a low-carb breakfast in the morning." The room was packed: apparently, noone in Nashville sits at home on Xmas night. After an hour or so, Collier brought up a young guest singer from Texas named Alicia, who knocked my socks off with her easy looks and effortless charm, with great pipes to match. These country girls have had their bar set almost unattainably high by stars like Carrie Underwood and Taylor Swift, but that doesn't seem to keep a whole new army of hopefuls from trying to fill their boots. (More pics below.) 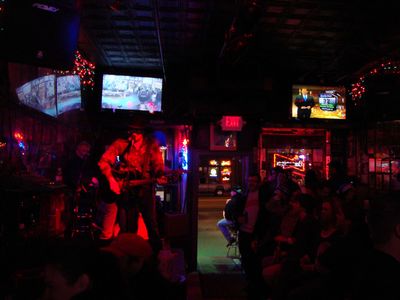 Merry Christmas to all! As with last year's trip to Ireland, I'll be taking advantage of the time off between Christmas and New Year's to do a bit of music-related traveling. This year's roadtrip takes me on a route straight through the roots of American music: Nashville, Memphis, the Mississippi Delta, and, finally, New Orleans. Yes, Virginia, I am going to Graceland...stay tuned for updates from the road.