Back to the New 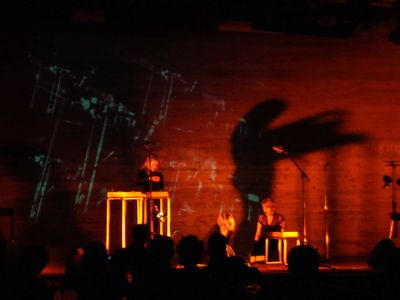 I took a break from the litany of holiday music last weekend with a pair of concerts that offered two very different visions of where classical music is at the end of the first decade of the third millennium - and where it might be going. At Galapagos on Friday night, New Amsterdam Records hosted an evening bookended by electronic music artists Lesley Flanigan and Tristan Perich, who've just come off a six week tour that took them to all corners of the country. (I last saw them in performance back at April's Bent Festival.) Lesley's Amplifications was quiet and ethereal, mixing sounds from her own hand-constructed instruments with multiple voices (including her own) and projections by Luke DuBois. 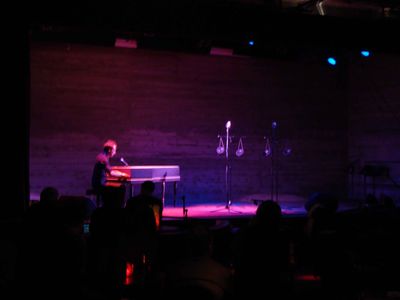 Tristan's Dual Synthesis took a more minimalist route, using a harpsichord to play extended, repetitive themes with 4-channel audio, all comprised of 1-bit electronics. At times, Tristan would let the electronics play by themselves, like a soloist pausing to let the orchestra take over; at others, he would battle against it as if he were playing Crystal Castles. With his wild, tousled hair, Tristan looked a bit like Beethoven, without the piles of scores. 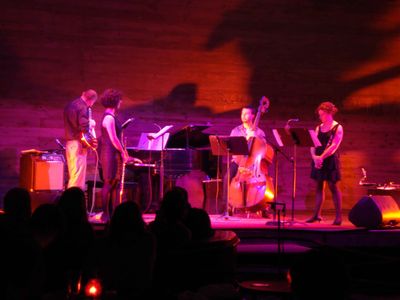 NOW Ensemble, which took the middle slot, is noone's idea of an ideal setup: flute, piano, double bass, electric guitar, and saxophone (among other reed instruments). As a result, they've had to resort to commissioning composers to write music for them, similar to other new music ensembles such as Eighth Blackbird and Alarm Will Sound. None of the new works they performed - all NY Premieres - particularly grabbed me, save for Judd Greenstein's Change, which was full of toe-tapping goodness, as bright and enjoyable as it was tightly constructed. Judd says he had in mind Gandhi's saying: "Be the change you want to see in the world," and Change reflects his conflicting feelings of optimism and skepticism as he looks back over the events of the past year. Whatever the inspiration, it was one of the best new pieces I've heard all year. (More pics below.)

Continue reading "Back to the New" » 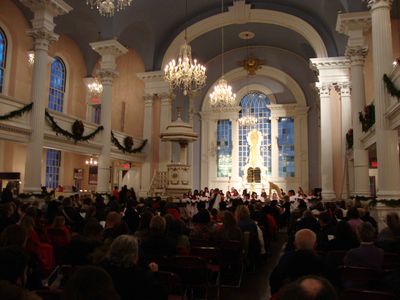 After work yesterday, I walked across Fulton Street to St. Paul's Chapel for a holiday concert by the Trinity Youth Chorus: a choir program for boys and girls between 5 and 18 led by Robert P. Ridgell. The centerpiece of the program (for which they were joined by members of the Trinity Choir) was Benjamin Britten's Ceremony of Carols: a sequence of 12 carols in old and middle English traditionally sung by a boys' choir (such as it is each year at St. Thomas Church in midtown.) But this performance was less about technical perfection than giving these kids the opportunity to sing in front of their parents and friends, in one of New York's most historic spaces.

They finished with a new carol composed for them called "The Future of the World Is Inside Me." Looking around at the banners and photos of 9/11 victims - vestiges of when St. Paul's was a volunteer station for rescue workers at the World Trade Center site directly across Church St. - it occurred to me that most of these kids hadn't even born yet in 2001. To them, this was just another concert, another Christmas. Has there ever been a greater testament to the power of renewal. (More pics below.) 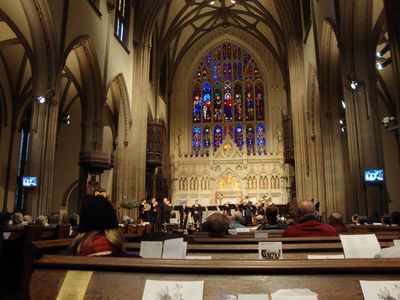 Holiday music and brass go together like Christmas and snow: you don't need one to have the other, but the two combined are just so much better. Fortunately for me, Trinity Church hosted New Jersey's Solid Brass this afternoon (part of its ongoing free Concerts at One series), in a program that included arrangements of French, German and English carols, along with selections from Gian Carlo Menotti's "Amahl and the Night Visitors" and a jazzy version of "Jolly Old St. Nick," both arranged by trumpeter Jeff Holmes. With Trinity's soaring stone interior providing plenty of shiny reverb, it was like unwrapping an early present. (More pics below.) 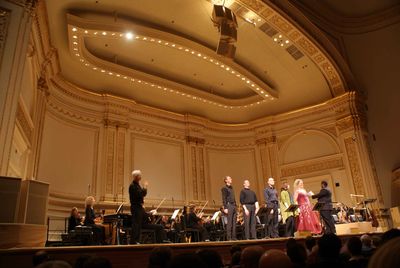 'Tis the season for holiday music in New York, with all the major arts institutions around town putting their usual offerings on the shelf in favor of the same old chestnuts that have been delighting audiences for decades, or longer. Carnegie's contribution to this year's meleé had the unfortunate name of Nativity Triptych: a series of three concerts held this past weekend in Stern Auditorium. The first two - neither of which I attended - had Quèbec's Les Violons Du Roy performing the usual suspects: Handel's Messiah and Bach's Christmas Oratorio. I'm sure they were both fine performances.

But the third concert, held Sunday night, was something altogether different. John Adams composed his oratorio El Niño ten years ago in celebration of the millennium, taking the traditional Nativity story and embellishing it with Latin American poetry and other mystical texts. It was well received, and has gone on to see numerous additional performances around the world. (It received it's New York premiere in 2003, and has been performed once or twice here since then.)

But, Sunday was the first time El Niño was performed at Carnegie Hall: a conspicuously high-profile presentation for a 21st century work. Clearly, Carnegie wanted to make a statement by placing El Niño in this particular context. But, would it hold its own next to the warhorses of Bach and Handel? Would people even show up?

Indeed they did: from my vantage point near the stage, I saw hardly any open seats. No doubt many were there by virtue of having bought the full weekend package, others out of curiosity, and for the chance to see Adams himself conduct the Orchestra of St. Luke's and Westminster Choir. But, I bet most were there because they had previously heard - or at least heard of - this modern masterpiece.

El Niño is in two parts of twelve sections each, each part lasting about an hour. The libretto is cobbled together from several disparate sources, including the Old and New Testament, the Apocryphal gospels, the Wakefield Mystery Plays and, most unusually, several Latin American poets. The main narration of the story is delivered by three countertenors singing in unison, their haunting voices backed by celesta, synthesizer and other electronics. For this performance, Carnegie reunited the three performers who sang the world premiere in Paris in 2000: Daniel Bubeck, Brian Cummings and Steven Rickards. 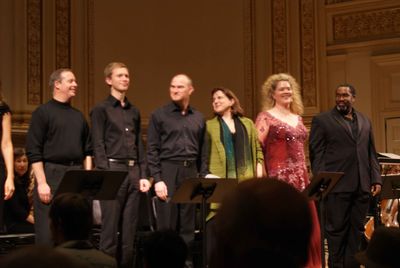 The incomparable Dawn Upshaw - who also performed in the world premiere - sang the central role of Mary as well as several of the poetic texts, including Rosario Castellanos' dark, searing "Memorial for Tlateloloco," about a pair of Mexican massacres separated by centuries. Michelle DeYoung's clear, powerful mezzo rang out in "La Anunciacion" and "Pues Mi Dios." And bass Eric Owens, who I last saw as Gen. Leslie Groves in Adams' Doctor Atomic, had the night's most extraordinary moment with "Shake the Heavens," where his voice quavered and erupted with volcanic force, not unlike Handel's setting of the same scripture in Messiah. (Adams has freely admitted that he was inspired by Messiah, using music to mirror the text in both mood and effect.)

There are many extraordinary moments in El Niño. Right from the start, in "I Sing of a Maiden," Adams employs his signature melisma in the strings, combined with brass that builds to a fever pitch. At the start of the "Magnificat," the orchestra convulses in an ecstatic explosion before quickly dying out. And, during the disturbing Slaughter of the Innocents, Adams makes the strings squeak like those in Bernard Hermann's Psycho. Despite all that clamor, El Niño ends quietly and mysteriously, with a children's chorus arriving on stage to sing a final poem by Castellanos, accompanied only by a solo guitar.

While he was alive, Handel himself would frequently conduct performances of Messiah, of all different shapes ands sizes. Watching Adams take numerous curtain calls with the soloists, it wasn't difficult to project ahead to the day many years from now when, after countless holiday performances of El Niño, audiences will say to themselves: "Wow, I wish I could have been there, back when Adams used to conduct it himself." (More pics below.) 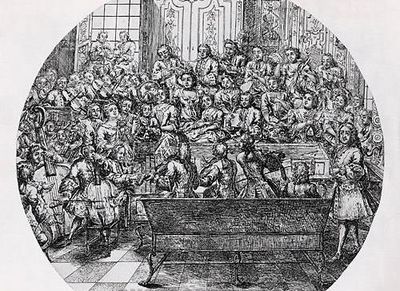 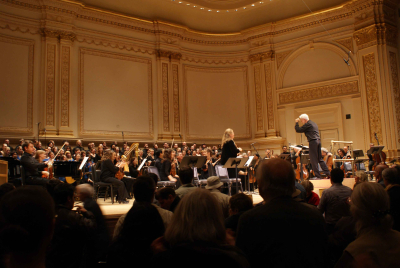