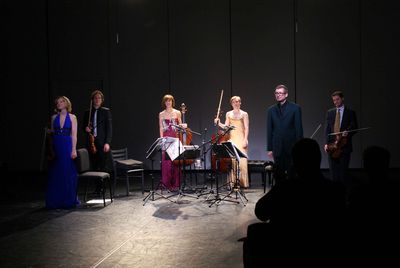 I like Schoenberg. And I like Philip Glass. But, when you pair Glass' own arrangement of his 3rd symphony with Schoenberg's Verklarte Nacht for string sextet - as the Glass Chamber Players did last night at the Baryshnikov Arts Center in Hells Kitchen - there's no question which piece stands out as the more distinct and provocative. The Schoenberg, with its roller coaster swings from soft to emphatic (and back again), was as dramatic and impassioned as the Glass was static and monotonous. (Not to mention Schoenberg composed his masterpiece at the tender age of 25.) Which brings up the inevitable question: is it possible we've actually gone backwards in our musical development over the past century? (More pics below.) 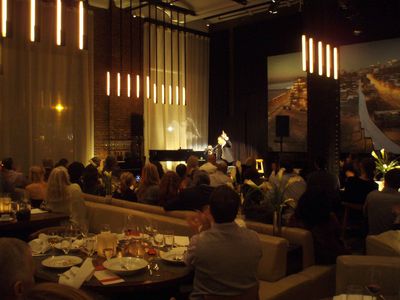 Sometimes, the day job has its perks: thanks to some folks I do business with, I was invited on Wednesday to Craftsteak for a five course meal cooked by Top Chef star Tom Colicchio, paired with wines from California's Simi Winery. As if that weren't enough, six-time Grammy winner John Legend played a 45 minute set, for a crowd that numbered less than 100. Legend performed from the piano, showing classical-grade chops with a clear, clarion voice that sounded like the next coming of Stevie Wonder. He filled in his own set list with requests from the crowd, and was both gracious and charming in his banter with Colicchio. Hard to imagine a finer night out in Manhattan. (More pics below.)

Now that Esa-Pekka Salonen no longer has a full-time conducting gig (he's still the Principal Conductor of London's Philharmonia Orchestra, basically a part-time job,) he presumably has plenty of free time to pursue what he calls his primary passion: composing. Which was precisely the reason he gave for leaving the LA Phil last spring after 17 seasons as Music Director. But Salonen seems to be having a hard time weaning himself off the podium, with a full plate of guest conducting engagements lined up this season, including last month's acclaimed production of Janáček's From The House of the Dead at the Met.

After Dead closed last week, Salonen stuck around NYC, making his way across the plaza to conduct the NY Phil in a subscription series. Thanks to a friend with a last-minute ticket, I made it to the final concert of the run on Tuesday, which was also my first visit to Avery Fisher this season and the first time I've seen the Phil since Alan Gilbert took over as Music Director in September. No noticeable changes to report, yet.

Salonen's program of 20th century chestnuts seemed to play to the orchestra's strengths. Bartòk's Music for Strings, Percussion and Celesta (1936) showed off the orchestra's bad-ass percussion section (Chris Lamb, Daniel Druckman, Markus Rhoten) - particularly in the raw, primordial 3rd movement, with its tam-tams and timpani bends. Ravel's Piano Concerto felt light in touch, which allowed French newcomer David Fray to shine without showiness. And Debussy's La Mer - probably the most subtle and interesting of all orchestral warhorses - filled up the house will the full sound of the 140-member Philharmonic.

But the real star was Salonen: a commanding presence who, through three decades of conducting, has somehow learned to project his dynamic energy onto an orchestra without drawing unnecessary attention to himself. It's hard to say how much influence a guest conductor can have on any group of players (especially this hidebound bunch) but Salonen's contribution to the whole - visual and aural - is unmistakable. I'm sure I'm not the only one who hopes he doesn't end up burrowing away in his writing den.

(P.S. Walking the halls during intermission, I unexpectedly bumped into a couple of Salonen's close friends: the Phil's new composer-in-residence (and fellow Finn) Magnus Lindberg, and John Adams, who's in town to conduct his own El Niño at Carnegie on Sunday. (I'll be there.) Funny, I never realized Tuesday was composer night at AFH...) 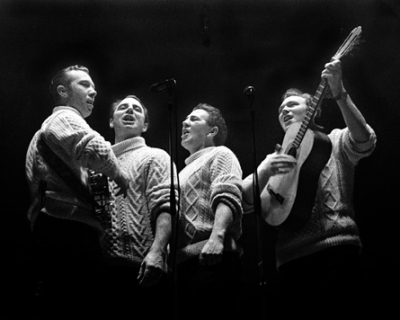 I've just learned the sad news that Liam Clancy, the guitarist and last surviving member of The Clancy Brothers, died this past Friday at age 74. For those of you who may not be familiar with them, The Clancy Brothers and Tommy Makem were expat Irishmen who started performing together in Greenwich Village in the early 60's, singing traditional Irish ballads, protest songs and, of course, drinking songs. Before long, they found themselves in the midst of the 60's folk revival that stoked the careers of everyone from Joan Baez to Bob Dylan.

"I never heard a singer as good as Liam, ever," Dylan said of his old friend in 1984. "He was just the best ballad singer I'd ever heard in my life. Still is, probably."

Growing up Irish-American, I learned these songs from old Clancy Brothers recordings. The list goes on and on: "Brennan on the Moor," "Young Roddy McCarley," "Irish Rover." In their prime, the power and passion of their singing made those provincial songs universal, and by virtue of being at the right place at the right time, they helped change the course of American music.

Go here for a sense of what we've lost. And discover the music for yourself.