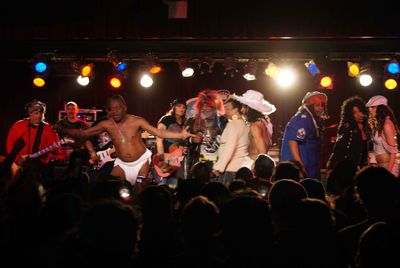 The Word Is "Love" It's been nearly two years since I last saw Evangelista at Cake Shop, but the experience was so searing, so unlike anything I'd ever experienced, I can remember every detail as if it were yesterday. So, when I heard they were playing The Stone last Saturday, in what may very well have been their last New York appearance, I hightailed it down there straight from Carnegie, arriving just as they were starting their late set. In front of a packed room, they played an hour-long set, mixing experimental sounds (via cello, laptop and guitars) with apocalyptic cowboy music (think: The Doors). Led by the astonishing Carla Bozulich, who channels everyone from Patti Smith to Evangelical preachers, the experience was both ecstatic and brutal, soothing and terrifying, revealing deep, dark truths too painful to reveal. For awhile there, I wasn't all that certain we were going to get out of there alive. Which, of course, is all part of their seduction.

Godspeed, Voyager. Hope to see you again. (More pics at the fan page.)

Last Saturday, the Takács Quartet - one of the worlds great string ensembles, founded in Budapest in 1975 and now in residence at the University of Colorado - played the second of their three scheduled concerts at Zankel Hall this season. Their series pairs quartets by Schumann and Beethoven with a work they've commissioned in the past year. (The first concert in October featured the Quartet No. 11 by Wolfgang Rihm, whose 4th quartet I heard MIVOS play two days earlier.)

The Schumann and Beethoven were pleasant enough wallpaper, but the real fireworks were provided by James MacMillan's (b. 1959) Quartet No. 3: a rich, intense work whose main theme was inspired by the keening of women off the coast of MacMillan's native Scotland. As first violinist Edward Dusinberre pointed out in remarks before the performance, this was music of "barely organized chaos,"with high pitched shrieks and rhythmic tapping that looked like the kind of free improv I usually see at Issue or The Stone. The piece grew more mournful as it progressed, with the cello sounding like a distant foghorn and the violins playing quiet, haunting trills. At the end of the third and final movement, the strings made no sound at all: a Cage-like gimmick that in context proved absolutely devastating. Like some modern-day Macbeth, I can only imagine what sort of ghosts haunted MacMillan in the creation of this quartet.

The Takács' final Zankel concert will be April 18, featuring John Psathas' A Cool Wind; tickets available at the box office or online. (More pics at the Fan Site.)