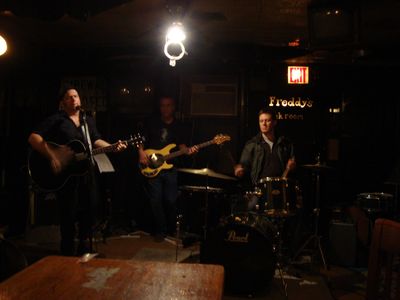 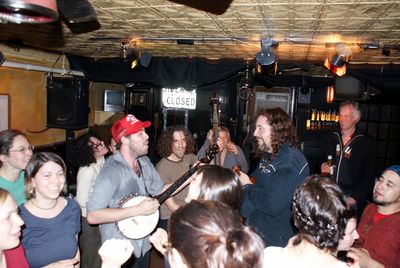 Over the past decade, I've spent many nights at Freddy's: the slightly scuzzy, offbeat bar on the corner of Dean and Bergen in Brooklyn which offers Donald O'Finn's hyperactive video montages in the main bar and all kinds of weird and wonderful music (including everything from indie rock to opera) in the Backroom, always for free.

As many folks know by now, Freddy's has been engaged in a drawn-out legal battle with Forest City Ratner, which got the courts to declare eminent domain over the property in order to make way for the new Nets arena complex, set to open in 2012. Freddy's finally received its eviction notice on March 5, and is supposed to vacate the premises by the end of the month.

At least, Freddy's isn't going down without a fight. In anticipation of eviction day, there are handcuffs chained to the bar, and a 9 ft guillotine has been constructed out of old PBR cans. More importantly, the music continues in full force through Sunday (with a final screening of "Blood Bath Cinema.") Stop by and raise a toast to the good ol' dive before the wrecking ball comes crashing down.

So, somewhere in the midst of my manic blogging from SXSW last weekend, I passed a notable milestone for FoM: 1,000 posts. It's been three years since I started this thing, with the intent of documenting the impossibly broad spectrum of live music happening in NYC (and elsewhere) on any given night. I'd wax poetic about all the crazy magical days and nights I've had, but I'm too busy checking out what's on the calendar for tonight.

Stay tuned for an exciting new project I'll be working on over the next couple of months that'll make this blog look like kid's play. (Photo: Storefront on Austin's 6th St., late Saturday night.)