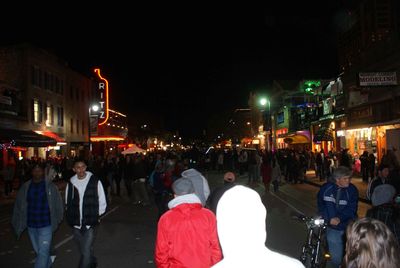 More pics at the Fan Page. 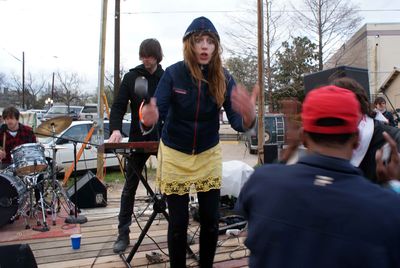 I missed catching Duchess Says when I was at Pop Montreal last October, and again when they were in New York for CMJ. I also missed their first four shows here this week. All of which heightened my anticipation for their final SXSW gig at Cheer Up Charlie's to nearly impossible levels, especially with the temperature hovering around 40 degrees.

Suffice to say, they did not disappoint.

The band plays no wave Moog rock via guitar, synth and drums that is sometimes danceable, sometimes asymmetrical. But, Duchess Says is really all about lead singer Annie-Claude Deschenes, who has up taken Karen O's mantle has the new wild child of rock. (Apparently, Karen approves as she invited the band to open for them on their UK tour last December.) A-C spent all of 30 seconds on stage before plunging into the crowd, thrashing around in the hay and jumping on the backs of various unsuspecting boys. She coaxed us into nonsensical duets, ate part of somebody's lunch, and threw her cocktail in guitarist Philippe Clement's face. She even got a bunch of us to run a foot race. (I lost.)

By the end of the performance, tears and mascara were streaming down A-C's face, leaving this listener visibly shaken. And not just from the cold.

Chalk up Duchess Says' quasi-religious zeal up to their own personal cult called the Church of the Budgerigars, inspired by the Australian parakeet of the same name. I'll let you figure it out on your own. 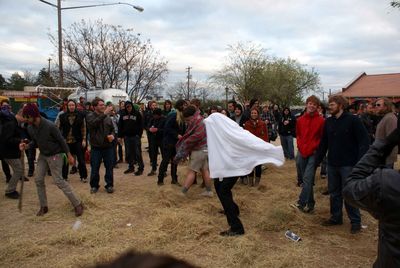 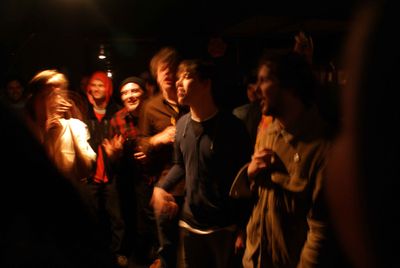 (Pictureplane at the Iron Gate): "Keep it real, people. This is real life."
(Patron): "Is that the name of the band?"