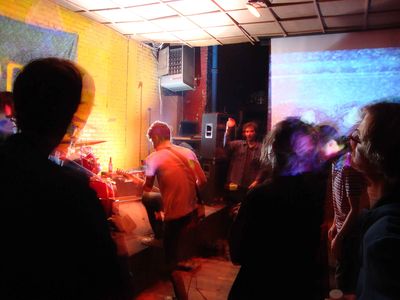 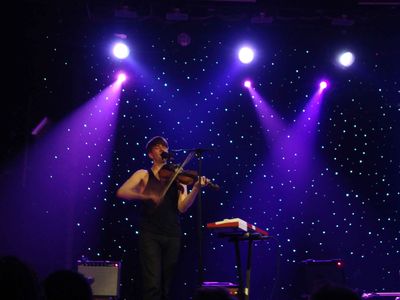 Owen Pallett's music defies easy categorization. Nominally indie rock, it encompasses the virtuosity and density of classical music, the beats and loops of experimental electronic music, and the lightness and sweetness of pop. Case in point: at the merch table for his show last night at a packed Webster Hall, one could purchase a copy of his latest release Hearltand in one of three formats: CD, vinyl, or fully notated score.

To be clear: Owen's show last night lacked the full-blown orchestration of his recordings, laden with brass, strings and percussion. But that's only because Owen insists in creating all of his effects live on stage with only a violin, keyboard and looping pedals, with some occasional assistance on drums and guitar from Thom Gill. In no way did his sound feel diminished: on the contrary, it felt focused, alive - and, in the case of "Many Lives" from 2006's He Poos Clouds, hair-raising.

There are others out there who share Owen's indie-classical instincts: Andrew Bird and Joanna Newsom come immediately to mind. But, aside from some recent shows at Carnegie or Lincoln Center, I can't remember the last time I experienced such sustained aural bliss over the course of an evening. At this rate, I imagine it won't be long before Owen finds himself haunting those same footlights himself. I was already biting off more than I should probably chew tonight, trying to hit both the last night of MATA at LPR and the Impose Magazine show out at Don Pedro's. But then, I just found out that Owen Pallett is playing an early show at Webster Hall tonight. Crap, here we go again...(Pictured: Owen Pallett playing the final Sunday of Wavelength at The Garrison in Toronto)