A Night in Toronto 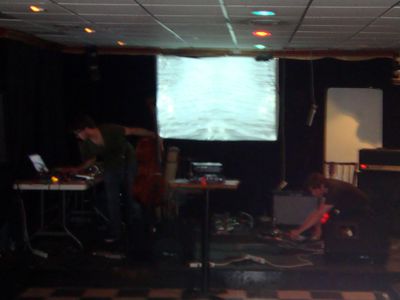 I was up in Toronto this past Saturday where, sometime around midnight, I found myself in an upstairs African restaurant near Kensington Market called Teranga (no website), which in the past two years has quietly become one of T.O.'s leading experimental/indie venues. Bryan Bray's Gardenia opened with a set that combined guitar and electronics with Nick Storring's processed cello.

I was then surprised to see Noveller in the house, having last seen Sarah during the Feast of Music Presents show on July 20. After rocking the house with her deep, dark drones, she handed the stage over to Unfact - otherwise known as David Wm. Sims of The Jesus Lizard - who processed his propulsive bass guitar through loops and effects pedals. The crowd was relatively sparse given the stateside reps these two have cultivated over the past few years, but what do you want for a second floor restaurant on a relatively dark stretch of road 500 miles from home? No matter: those lucky Canadians who were there got to see a helluva show. 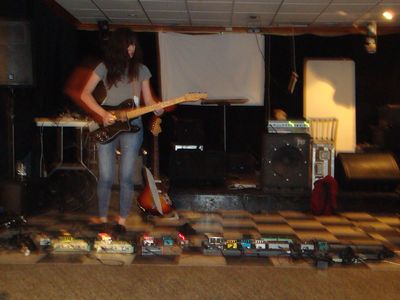 Lost In The Trees & The Loom @ Mercury Lounge 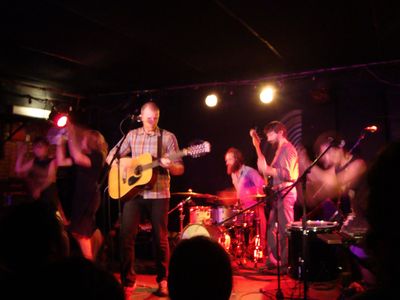 A brilliant show from Chapel Hill-based Lost in the Trees this past Monday at the Mercury Lounge, layering classical textures (via two cellos and a violin) on top of indie and folk motifs. At one point, singer/songwriter Ari Picker spoke to the capacity crowd about the band's musical genesis, which was unfortunately lost on most of those in attendance:

"I discovered classical music relatively late, in 2005. It was a mind-opening experience, like going to church or temple for the first time. I'd never had any lessons, never had any exposure to classical music growing up. Just thought I'd tell you that to help explain what it is we're doing up here."

They closed with a sweet, charming sing-along played in the center of the floor, the glockenspiel and unamplified strings making me think I'd landed smack dab in the middle of a chamber concert. They were able to sustain that illusion until the end, when the manic screams of approval broke the hushed silence. Who knows, maybe someday we'll hear those same screams in concert halls.

Local indie folksters The Loom opened with their own brilliant set, glistening with brass, banjo and percussion. All-in-all, not a bad way to start the week. (More pics below.)

Continue reading "Lost In The Trees & The Loom @ Mercury Lounge" » 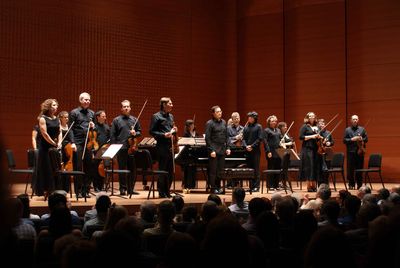 I neglected to mention the terrific Mostly Mozart matinee I attended a week ago Sunday at Alice Tully, which featured Pierre-Laurent Aimard doing his playing/conducting/explaining-thing (just like he did last year) with the crisp, sharp Chamber Orchestra of Europe. The connections Aimard drew between Bach and Boulez, or Bach and Elliott Carter, were admittedly lost on me, but just listening to Aimard try to convince us (under the aegis that they all used polyphonic techniques) proved to be its own entertainment. If Chicago would offer up its directorship to someone with a similarly polymusical background but far less charm, one can assume it's only a matter of time before Aimard has his own orchestra.