How Do You Get to Citi Field? Carnegie Hall.

OK, so here's a new one: Facebook fans of Carnegie Hall just got a communication offering them $30 tickets to the Mets game this Wednesday night against the Marlins. (Normally priced at $35. Bargain.) Putting aside for a moment the probability that this is a cookie-cutter program that the Mets offered Carnegie under the guise of: "This will help make you look cool to your younger patrons!" Carnegie missed a golden opportunity here. As in: Sign up for one of our 2010 subscriptions, and get a pair of tickets to the Marlins game for $10. Or, hell, just give them the pair gratis. I mean, it's not like they're the Yankees. And, who doesn't like hot dogs, really?

Oh well, at least you still get a free Mets Skyline keychain. 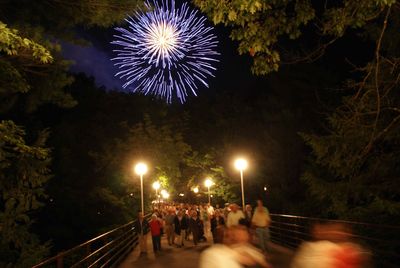 More pics from the Philadelphia Orchestra's SPAC concerts this weekend on Flickr. 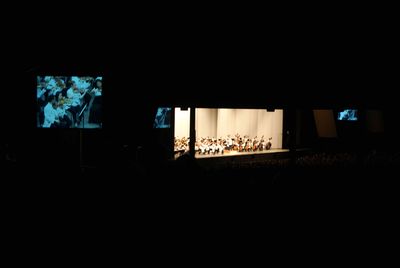 The Philadelphia Orchestra ended their SPAC season last night with an all-Tchiakovsky concert that was heavy on the crowd-pleasers. After opening with the buoyant Polonaise from Eugene Onegin, newcomer Khatia Buniatishvili gave a smoldering, passionate - and slightly off - performance of the 1st Piano Concerto. The second half of the concert began with the thoroughly enjoyable Fantasy-Overture to Romeo and Juliet, and ended with the 1812 Overture, complete with costumed solidiers shooting cannons into the Adirondack pines. And, yes, once again there were fireworks. More pics below.

A Miracle Under the Stars 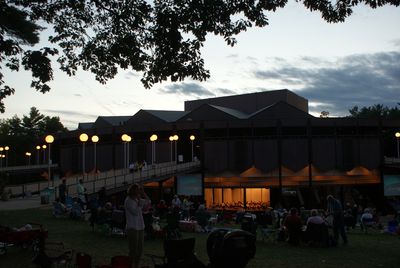 Most folks in who spend the day at the Race Course here in Saratoga are content to spend their evenings having dinner at Siro's or the Gideon Putnam, followed by drinks along the bars lining Caroline and Maple Streets downtown. Which may explain why the house at the Saratoga Performing Arts Center last night was noticeably less-than-full for a stellar program by the Philadelphia Orchestra, on an clear, beautiful night.

To be honest, SPAC is no Tanglewood. Built in the mid-60's, the exterior is brown corrugated metal, the flimsy stage canopy is peeling in numerous places, and the hard plastic stadium seats are better suited to baseball than Beethoven. Moreover, the auditorium is built on two levels that needs to be compensated for with amplification, which is a disappointment compared to the Shed's near-perfect acoustics. Most folks seemed content to sit on the distant lawn outside, though at $23, even that's no bargain. 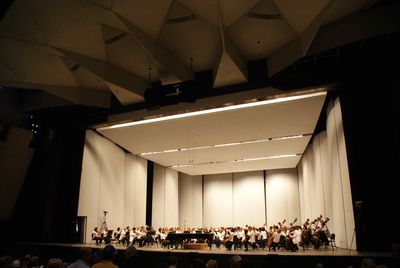 The concert started strangely with Rimsky-Korsakov's arrangement of Mussogsky's Prelude to Khovanschina: a quiet, meditative piece that threatened to put to sleep those patrons who weren't already dozing off. Still, that stop some rowdy kids there as part of Family Night from screaming their approval like they were at a Justin Bieber concert. Okay.

Gauging the low level of buzz during the set change, it seemed most folks in the house had no idea what they were in for with the next piece on the program: Rachmaninoff's 3rd Piano Concerto (the infamous "Rach 3" as popularized by the Oscar-winning film Shine and elsewhere.) Fortunately, violinist Herbert Light - a 50 year veteran of the orchestra - came out to say a few words in advance, recalling how Vladimir Horowitz - one of the greatest pianists of all time - left the stage sweating after a performance in the 60's, grunting in his deep Russian accent: "That is very difficult piece." Indeed, Rachmaninoff's 1909 masterpiece is generally considered to be one of the most difficult concertos ever written: a Double Black Diamond only to be attempted by seasoned professionals, or the insane.

Last night's soloist, the American Garrick Ohlsson, has become known in recent seasons for his surveys of the solo piano music of Beethoven and Chopin, but also has over 80 piano concertos in his repertoire, ranging from Mozart to Busoni. The Philadelphians themselves have a long pedigree with the Rach 3, having made a landmark recording with the composer as soloist back in 1939.

Remarkably, Ohlsson displayed only poise and grace, his body remaining remarkably still while his hands flew in all directions. The first movement took my breath away: quiet exposition, followed by frenetic development that went on for some fifteen minutes, ending with a recapitulation that made you wonder if the whole thing was just a fever dream. The delicate-yet-intricate 2nd movement launched straight into the Finale without pause, hurtling deliberately towards its demonic conclusion (the same one that sent David Helfgott over the edge in Shine.) I was on the edge of my seat the entire time, and was one of the first to leap to my feet after the final cadenza came crashing down. 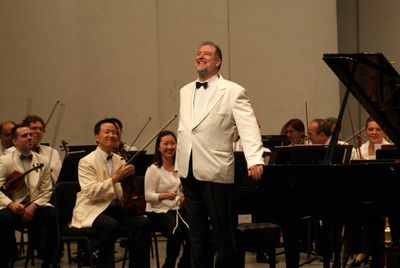 After several curtain calls, Ohlsson rewarded us with an unexpected encore of Chopin's famous Waltz in E Flat, Op. 18: a tricky piece under any circumstances, but ridiculous given that most pianists would need an ice bath after traversing the Rach 3.

The concert ended with Dvořák's 8th Symphony, which I heard less than two weeks ago at Tanglewood. It was a perfectly adequate performance under guest conductor Lawrence Foster, though almost anything would have been a disappointment after Ohlsson's miracle. And, as if all that weren't enough, there was a free fireworks show that shot off for some fifteen minutes after the final curtain. 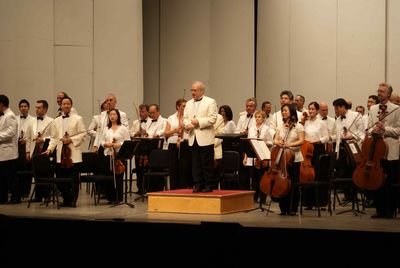 The Philadelphia Orchestra concludes their Saratoga residency tonight with an all-Tchiakovsky spectacular, featuring the 1st Piano Concerto, the 1812 Overture (with cannons) and, yes, more fireworks. Tickets available at the box office or online. (More pics below.) 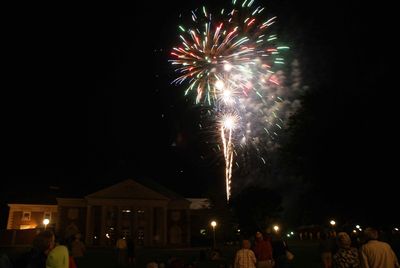 Continue reading "A Miracle Under the Stars" »