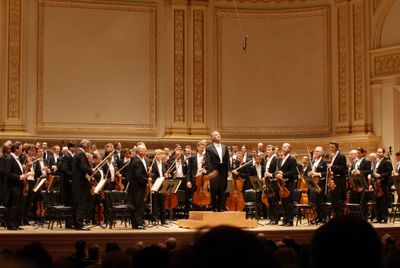 The new fall season is upon us, with the NY Phil opening it's season last week with Wynton Marsalis' new Swing Symphony and the Met Opera opening on Monday with Robert Lepage's new production of Das Rheingold (which received a decidedly mixed reaction in-house, as heard on the Met's free online stream.) Last night, the Vienna Philharmonic did the honors at Carnegie, performing an all-Beethoven concert with Lang Lang and Nikolaus Harnoncourt, presiding.

I didn't make it to any of those black-tie affairs (okay, I wasn't invited), but I will be at Carnegie tonight to hear the VPO - in my opinion, the world's greatest orchestra - in what should be a monumental performance of Bruckner's 8th symphony Smetana's Ma Vlast, also conducted by Harnoncourt. Over the weekend, LA Phil director Gustavo Dudamel takes over the reins, returning to the Carnegie podium for the first time since his triumphant concerts with the Simon Bolivar Youth Orchestra three years ago. I'll be there on Sunday for the matinee concert with Dvorak's "New World" Symphony and Yo-Yo Ma playing Schumann's Cello Concerto.

All-in-all, a very exciting time to be in NYC. 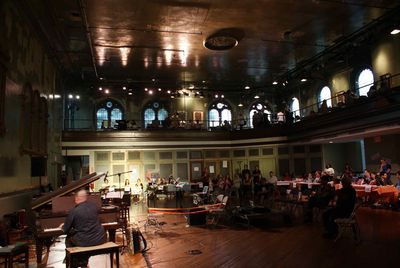 After the initial success of last year's New Music Bake Sale, organizers decided to move the event this year to Ft. Greene's Irondale Center: a decommissioned church on S. Oxford housing a large, horizontal space with a wrap-around balcony. The church is in a state of gentle decay, with paint peeling off the walls and a faded portrait of some unnamed saint above the stage/altar.

As with last year, the Bake Sale - basically a grungier version of the better-known Bang on a Can Marathon - featured performances, raffles, and rows of tables behind which musicians peddled everything from CDs to cupcakes. (You also got two free pints of Six Point with your $15 admission.) Giving the event some extra sheen this year was the presence of MC's Jeff Spurgeon and Terrance McKnight, both from local classical station WQXR.

In the 2 1/2 hours I spent there, I heard the piano/electronics of Pat Muchmore and Kathleen Supove, up-and-coming string quartet MIVOS, and Dither playing with blindfolds and ropes around their legs while boys without shirts gyrated and clung to Dither's chair legs. And, yes, I bought some CDs and savory snacks, all for a very good cause. 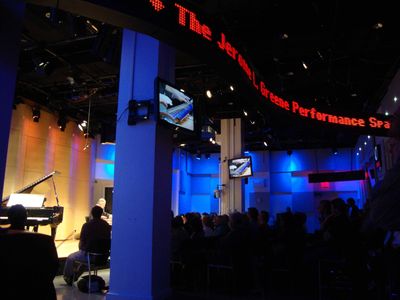 Last year, longtime local radio station WNYC moved from its longtime digs near City Hall to a new space on Varick Street, just east of SoHo. Following the fishbowl model of the cable TV and morning news shows in midtown, they included a street-level studio so that passers-by could gawk at the proceedings within. But, instead of whitecapped newscasters blathering on about credit swaps or the latest in gourmet cupcakes, WNYC's Greene Space offers political debates and conversations with visual and performance artists.

They also occasionally feature live performances, as they did this past Monday when Nadia Sirota, violist, new music specialist, and online host of Q2's midday programming, hosted a concert devoted to the works of contemporary Chinese composer Chou-Wen Chung. The space was small but cozy, with seats arranged in rows before a well-lit stage and a bar which offered free wine after the concert. 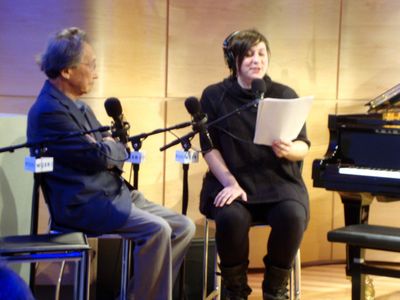 In conversation with Nadia, the elderly Chung spoke eloquently of the impact the Qin – the ancient seven-string Chinese zither - had on him when he was a child. Stephen Dydo helped to illustrate his point with a performance of "Flowing Streams": a traditional piece for Qin that Chung selected to be included on the Golden Record sent out with the Voyager spacecraft in 1977.

The main event of the evening was a performance of Chung's "Clouds", performed by the Brentano String Quartet, which commissioned the work in 1996. Chung said this was the first time he'd been asked to write a string quartet, and the resulting 30 minute work was both challenging and accessible, energized by the Brentano's markedly emotional of style performance. The next event to be held at the Greene Space will be a live broadcast of John Schaefer's Soundcheck on 9/28, featuring a conversation with David Byrne and Phil Collins as well as a live performance by Angelique Kidjo. Tickets are $15 if you want to check it out in person - or just tune in online or on your radio. 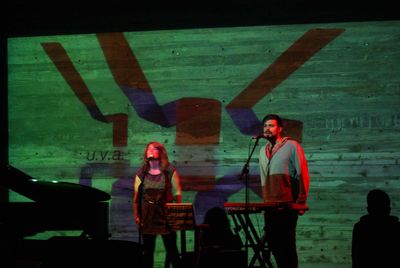 An excellent triple bill this past Sunday night at Galapagos combining the solo guitar and electronics of White Ribbon Highway, the solo piano and electronica of Toronto John Kameel Farah, and the duo keyboard and vocals of Ultraviolet Astronomy (a.k.a. U.V.A.) More pics on Flickr.