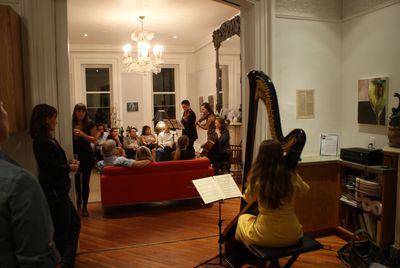 Not getting into Meredith Monk's performance at the White Lights Festival on Thursday did allow me to make my way over to Clinton Hill in time to catch that evening's Metropolis' Ensemble's concert, which took place in a Washington Ave. brownstone owned by board member Jennifer Salomon. Home shows are fairly common in NYC - I just went to a loft party in Williamsburg last week, and have been to David Lang's loft twice now - but in this case, the piece literally was the Brownstone.

As in: Jakub Ciupinski's Brownstone: a 20 minute electro-acoustic composition for ten musicians spread across all three floors of the house. In the end, it was more art installation than concert, reminding me of the amazing Happiness Project installation I saw during Pop Montreal last year, where local artists took over different rooms of a house and designed each of them according to a different track of Charles Spearin's album of the same name. I've always hoped someone would try to replicate that experience here in NYC, bringing with them that same sense of familiarity and warmth so often lost in the concert hall.

Before and after the performance, there was wine, food and conversation with the composer, musicians and Artistic Director Andrew Cyr, who seemed genuinely thrilled by the outcome (even if he had nothing to do during the performance.) Everyone seemed to congregate in the kitchen, which is where everyone always wants to hang out during house parties. And, in this case, performances. (More pics below.) 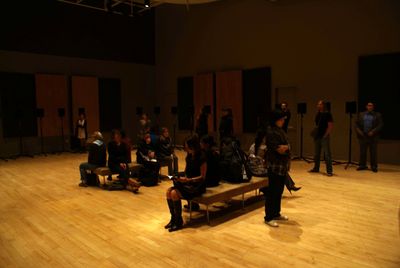 "I try to never forget that I enjoy the privilege of engaging in an activity that affirms the spirit of inquiry and allows me to make an offering of what I have found." Meredith Monk

The inaugural White Light Festival opened Thursday night at Lincoln Center with two celebratory - if subdued - events, both free and open to the public. At a rehearsal space tucked away inside Jazz at Lincoln Center was an opening reception for Janet Cardiff's art installation The 40-Part Motet (2001), last seen here in NYC at MOMA in 2006. The 40-Part Motet consists of an 11 minute recording of the Salisbury Cathedral Choir singing Thomas Tallis' 1573 motet "Spem in Alium," with each voice individually recorded and projected through one of 40 loudspeakers placed on the perimeter of the dimly-lit room.

Listeners were encouraged to walk around the room during the performance, offering them a unique perspective similar to that of the singers themselves. As Cardiff writes:

"Enabling the audience to move throughout the space allows them to be intimately connected with the voices. It also reveals the piece of music as a changing construct...You can hear the sound move from one choir to another, jumping back and forth, echoing each other and then experience the overwhelming feeling as the sound waves hit you when all of the singers are singing."

People were clearly taken with the piece during the brief time I was there: some sat in Lotus position on the floor, while others stood with their eyes closed, transfixed in a deep, meditative state.

After the final, contrapuntal notes lifted heavenward, Cardiff kept the tape rolling, recording the coughs, murmurs and banter of the singers before launching back into the Tallis once more. Rather than being a distraction, it perfectly captures the magical transformation of these singers from ordinary humans to vessels of profound art. 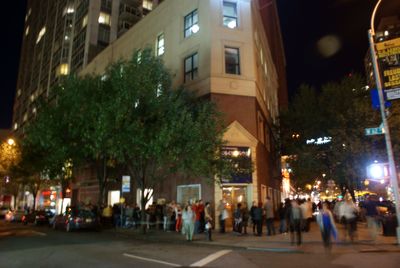 Two blocks north, the David Rubenstein Atrium hosted a free performance by Meredith Monk and her Ensemble, part of a free, weekly series sponsored by a certain discount department store. Unfortunately, I couldn't get inside to witness the performance in person, but thanks to the magic of digital technology, I was able to see an archived video of the performance on the festival website.

"I'm so honored to be a part of this beautiful festival," Monk said as she took the stage. "We need it so badly for the world that we live in."

In the program notes, Monk refers to the voice as the "Soul's Messenger," the oldest and richest of all musical instruments, uniquely capable of expressing the full range and sweep of our humanity. As a composer, she speaks of the mysterious and spiritual dimension of coaxing these pieces from the chaos:

"I have the sensation that every piece is a world that already exists in another dimension. In a lifetime of making work, there are a few pieces that have a certain shine. They seem to have had a life of their own right from the beginning, to have been born whole...Although I remember all the meticulous and patient work of bringing them to life, I also remember the seeming inevitability of their forms and the clarity and ease of their fulfillment. How did this happen? I consider these entities gifts from a larger and wiser realm and the times of making them, blessings."

Monk performed works from throughout her remarkable 40 year career, both alone and with members of her ensemble (Katie Geissinger, voice; Bohdan Hilash, woodwinds; Allison Sniffin, voice and piano.) By their very nature, Monk's pieces - with their caterwauling and animal-like screeching - can seem strange and otherworldly to the uninitiated, yet somehow manage to speak directly to something pure and primal within all of us.

"I am grateful for being part of music," she concludes, "for the magic of music permeating my life." 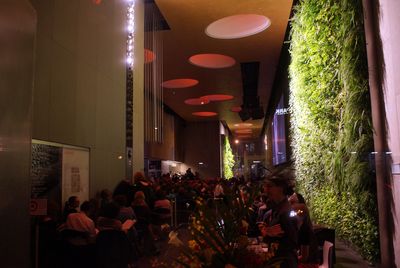 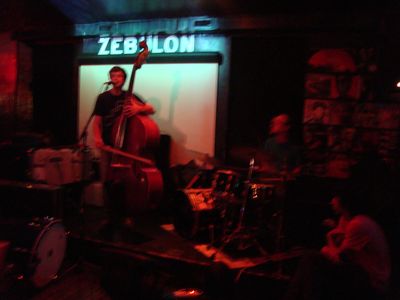 I made the trek out to Williamsburg last night for an amazing evening of experimental pop at a packed-in Zebulon. First up was the mesmerizing Nat Baldwin who played upright bass and sang in a high, quavering voice (not unlike that other guy he usually works with.) The overall effect was creepy and ethereal, the driving warmth of the bass complemented by Will Glass' complex drumming. 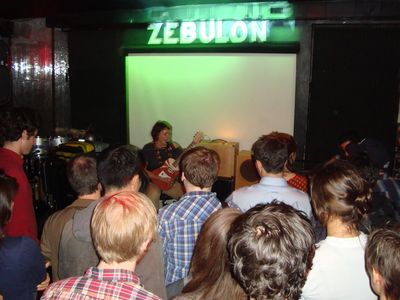 Nat was followed by DIY duo Buke and Gass, who I saw just last week during CMJ. Maybe it was the relative tightness and scruffiness of the room, but last night's show felt far more intense, full of mathematical precision, breathtaking dissonance and rhythmic, tribal drumming (stomped out by Aron Sanchez while playing his hybrid guitar/bass.) And, of course, there was Arone Dyer: singing her heart out, smiling all the way. For my money, B&G are playing the most furious, intricate, ecstatic music in NYC right now; unfortunately, you'll need to wait til December if you want to see them here again. Unfortunately, I missed the late night set by Delicate Steve, who plays acoustic folk mixed with electronics, but I might try to catch his late night set on Halloween at Cake Shop.

More pics below and on Flickr. Apparently, the Times was there, too.