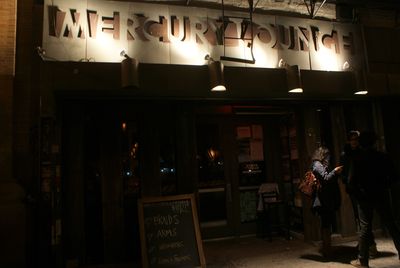 On a dark and quiet Monday coming off a long holiday weekend, one could be forgiven for not wanting to venture out into the early winter cold. But, after five days of no shows, I took a chance that last night's Mercury Lounge bill would help take the chill off. Indeed, it did not disappoint.

Brooklyn's Neighbors kicked things off in front of a half-filled room, playing 90's synth pop over Noah Stitelman's hushed, emotive vocals, which came off sounding like a carbon copy of The National's Matt Berninger. Not that that's a bad thing, but if you can't lay claim to your own voice, then what's the point?

Far more arresting were ARMS, the one-time side project of former Harlem Shakes guitarist Todd Goldstein that has evolved into a full-time ambition. Goldstein, looking like the fifth member of Mumford & Sons with tie, vest and mustache, sang with passion and energy, backed by a wall of synth, guitar and drums that rose, fell, and rose again. It was easy to imagine these guys playing some festival stage this summer, with the golden sun setting behind them. 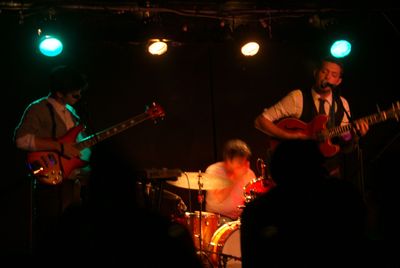 But, the real discovery of the night was Montreal's Braids, who held up their city's rep for well-crafted, startlingly original music. Using a mix of synths, drums and guitars, they crafted an immersive, magical soundscape that mixed everything from Afrobeat to shoegaze, sounding a good bit like High Places and (early) Animal Collective. Indeed, Raphaelle Standell-Preston's echoing vocals sounded a lot like Mary Pearson's for most of the set, but erupted towards the end in a frenzied wail that belied her willowy frame. Braid's other members - keyboardist Katie Lee, guitarist Taylor Smith and drummer Austin Tufts - all contributed multi-layered support, singing harmony and playing with pedals to conjure an angelic, irresistably pretty sheen. This was music to fall asleep to: dreamy and full of love.

Surprisingly, Braids had zero merch for sale last night: no t-shirts, no CD's, not even a button. Poetic justice, perhaps for those of us who made the effort to be there, but sad in the sense that we couldn't bring it home to remember, or share. Until next time, then. 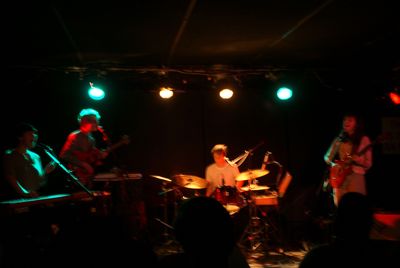 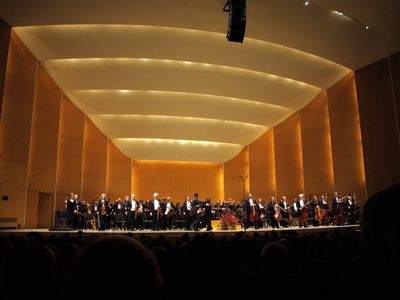 Through an unexpected twist of fate, I've begun spending occasional weekends in Buffalo: that western New York city best known for the Bills, Ani DiFranco and Hot Wings. And, while Buffalo's musical offerings on tap aren't nearly as broad or rich as their cross-state rival, there are some real jewels in the rough, if you know where to look.

Take the Buffalo Philharmonic Orchestra, whom I saw last Saturday at their longtime home, Kleinhans Music Hall. The orchestra, which celebrates its 75th anniversary this year, has had an impressive string of music directors over the years, including William Steinberg, Michael Tilson Thomas and, most notably, composer/conductor Lukas Foss, who, during his 8-year tenure, programmed more contemporary music than any orchestra in America, turning Buffalo into a veritable mecca for new music.

The BPO's current music director is JoAnn Falletta, who was appointed in 1999 and remains one of only a handful of women leading major orchestras in this country. In 2009, her Naxos recording of John Corigiliano's "Mr. Tambourine Man: Seven Poems of Bob Dylan"  won the Grammy for Best Contemporary Classical Composition; in all, she and the BPO have recorded a dozen albums for the label.

Walking in the doors of Kleinhans, situated in the middle of the leafy Elmwood neighborhood, I thought I'd mistakenly stumbled into a high school auditorium. The hall, designed in 1940 by Eliel and Eero Saarinen, was considered state-of -the-art at the time of its construction, and still claims to have some of the best acoustics of any concert hall in the country. But, with its plain walnut walls and narrow green metal folding seats, it isn't all that inspiring to look at. 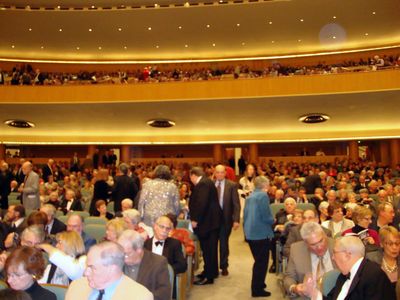 Fortunately, the orchestra itself was far stronger than one might expect from this isolated city on the shores of Lake Erie. The concert opened with a new work by Buffalo-native Philip Rothman, Arc of Visibility, inspired by the lighthouse beams that guide ships to safety. After some early promise, with startling glissandi in the cellos and brisk, clanging percussion, it unfortunately devolved into a muddle of Hollywood-sounding music.

Following were a pair of Gershwin's works for piano and orchestra. No, not the Rhapsody in Blue, but the less known Concerto in F and Rhapsody No. 2, confidently played by the exciting young pianist Orion Weiss. While missing some of Blue's toe-tapping excitement, these lesser-known works still showed plenty of swing and verve, if lacking somewhat in substance.

The concert ended with William Schuman's New England Triptych: an evocative homage to Ives' Three Places In New England. Schuman, who divided his time between composing and serving as president of both Juilliard and Lincoln Center, has been unfairly overlooked, with a catalog of that includes ballets, choral music, and no fewer than ten symphonies. One of his best known works, New England Triptych was driving and sonorous, tender and brisk, with long lyrical lines and brilliant textures. Finally, here was music you could sink your teeth into.

After spending so much time of late at Lincoln Center, a trip to hear this regional orchestra was sure to disappoint on some levels. But, for the folks that live in Buffalo, they should know that they have a real treasure in their backyard, offering them ready access to performances at the highest level of some of the great music of the past two centuries.

Speaking of which, I'll be back again this Saturday for an excellent-sounding concert including Rautavaara's Isle of Bliss (1995), Elgar's Cello Concerto (with Lynn Harrell), and Brahms' 4th Symphony. Seems like a good way to stay out of the cold. 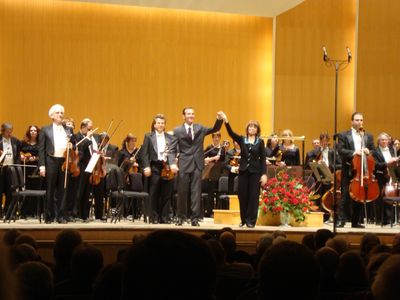 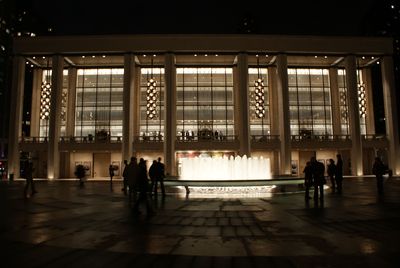 Last Thursday, I had the opportunity to attend City Opera for the first time this season to see a performance of Richard Strauss' Intermezzo: a two-act comedy of manners about a composer and his forlorn wife, who mistakenly accuses her husband of adultery while he is out on tour. (Yes, the opera is based on a real event that took place between Strauss and his headstrong wife, Pauline.)

The singers were all solid, especially Nicholas Pallesen as the composer Storch, and Mary Dunleavy as his wife, Christine. And, from what I could tell, the orchestra sounded fine under music director George Manahan. But, the real star here is the opera itself, which flows effortlessly over its three hour length, with a delightful and cutting libretto written by Strauss himself.

"You're always around the house," Christine says to Storch in the opening act. "Other husbands go off to the office."

"I never learned anything else," he replies. "My work brings me great pleasure."

"Work is never a pleasure."

Unfortunately, I wasn't able to stick around for the Act 4 afterparty, which featured free drinks and a performance by Active Child, fronted by former choir boy Pat Grossi. A nice throwback to the free Big Deal parties City Opera used to throw, before things went south on them a couple of years ago. Let's hope director George Steel has more tricks like that up his sleeve to help fend off the behemoth across the plaza. (More pics below.)