Nick in Toronto shared the above video with me earlier today, a reminder of the wonders of the TRANZAC: that delightfully oddball venue with the Zine gallery upstairs and some of the most inventive, courageous music anywhere downstairs. Unfortunately, TRANZAC has fallen on hard financial times and is in danger of closing at the end of the year if they can't raise enough money via donations and benefit concerts. If you can spare a few bucks, go here and help 'em out, before it's too late. The astonishing Paul Jacobs, chair of Juilliard's organ program since 2004, took the newly-restored Alice Tully Hall organ out for a spin Tuesday night as part of the ongoing White Light Festival. The organ, which was part of the hall's original construction in 1969, sits behind the stage wall, which was opened up for Tuesday's performance. With over 4,000 pipes in 85 ranks, it is one of the largest organs in NYC - and the only one that lives in a concert hall.

I last saw Jacobs over three years ago, when he performed Messiaen's mammoth Livre du Saint Sacrament. From memory. If that weren't astonishing enough, he performed Bach's complete organ works in 2000, at the age of 23, in a marathon 18 hour performance. From memory.

So, for the organ's first public hearing since 2006, it wasn't all that surprising that Jacobs chose Bach's Clavier-Ubung III: a massive, two-hour work of preludes and fugues, duets and chorales that alternates between organ and choir (supplied here by the Clarion Choir.) Naturally, Jacobs played it from memory.

The organ, an eclectic tracker organ, can be adjusted to accommodate both the light sound of the 17th and 18th centuries and the huge romantic masterpieces of 19th and 20th century. To my ears, it sounded crisp and clear, if wanting some of the resonance familiar from vaulted stone churches. But, what we heard was what Bach heard. No, better.

It's good to have you back, Tully organ. 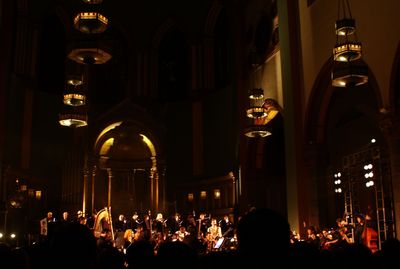 It's hard to be believe that it's been nearly three years since since the debut of the Wordless Music Orchestra, in an epic concert at the Church of St. Paul the Apostle that included the U.S. premiere of Jonny Greenwood's Popcorn Superhet Receiver. In many ways, the concert was the signal event of Ronen's ongoing Wordless Music Series, marking an evolution from quiet, chamber-sized groups to forces capable of big, earth-shaking sounds.

Ronen and the Wordless Music Orchestra returned to a sold-out St. Paul the Apostle last night under the auspices of Lincoln Center's White Light Festival, in an event accurately described by one nearby listener as a "happening." Starting things off in a quiet, contemplative mood, The Hilliard Ensemble performed Antoine Busnoy's 15th century motet In Hydraulis, followed immediately (and imperceptibly) by the world premiere of Kjartan Sviensson's Cage a Swallow Can't You but You Cant Swallow a Cage, employing sonnets by Anne Carson. (For those who may not be familiar with the latter composer, Sviensson is best known as the keyboardist/arranger for Icelandic band Sigur Ros.)

Then, the Wordless Music Orchestra and the Latvian National Choir performed the world premiere of Sviensson's Credo: an expansive, tonal work that vacillated between high-pitched string and deep, groaning bass that echoed around the soaring space. Singers and orchestra players used LED lamps to see their music in the near-pitch darkness.

After intermission, the orchestra and choir were joined by Sigur Ros' Jonsi and his musical (and life) partner, Alex Somers, who performed selections from their 2009 studio release, Riceboy Sleeps. Standing in the center of the orchestra wearing white shirts and guitars, they looked like the angels situated high above the altar, lit up in blue and green. David Handler's live arrangement of the mostly-electronic album was both quiet and engaging, gentle and arresting. And, while some listeners expecting an ur-Sigur Ros show may have been disappointed, those who accepted this generous and genuine gift on its own terms were richly rewarded. 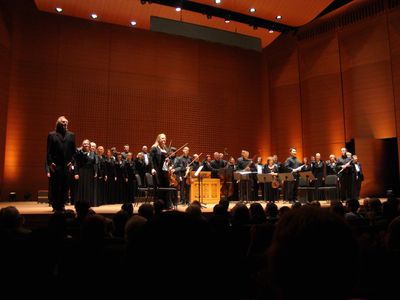 As with last week's concert by the Tallis Scholars, Saturday's concert featuring the Latvian National Choir - also part of the White Light Festival - juxtaposed the sacred music of contemporary Estonian composer Arvo Pärt with that of a historic predecessor - in this case, J.S. Bach.

Performing with the Orchestra of St. Luke's, the Latvians sang the Bach selections - a pair of obscure motets - with grace and diction. But, they lavished their full emotion on the music by their near-countryman, Pärt, whose Stabat Mater and Adam's Lament were both performed for the first time in this country. The words - lamentations on man's fall from grace due to Adam's sin in the Garden of Eden - were no less heavy than the music, which was irrepressibly sad and sat on this listener's chin like an anvil.

As an encore, the choir offered some levity in the form of Pärt's Estonian Lullaby, which drifted off just like a infant falling asleep.