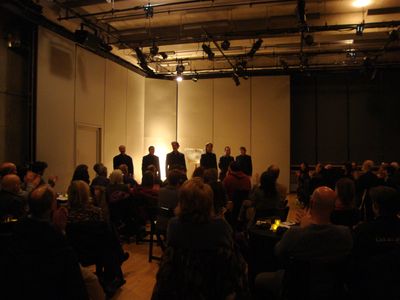 Last night, France's Ensemble Organum came to the Baryshnikov Arts Center to perform Guillaume de Machaut's Messe De Nostre Dame (1364): one of the earliest known complete settings of the Latin Mass and, by general agreement, one of the finest. The performance - led by Enesmble Organum's director/tenor Marcel Peres - was completely authentic, sounding almost Middle Eastern with their copious use of melismas and vibrato.

The six singers - tenors, countertenors and basses - processed in wearing identical black suits and stood together around the illuminated score, just as tonsured monks would have done 650 years ago. The music wasn't immediately accessible - their voices were nasal and grating, full of dissonances and abrupt pauses - but  there was no denying it's mystical power. And, while it may have been unusual to hear this music in a non-church setting, Thomas Dunn's effective lighting more than made up for it. 'Tis the season of genre-bending new festivals: hot on the heels of the inaugural White Light Festival, the Kaufman Center brings us the Ecstatic Music Festival: a two month series of events exploring the "fertile terrain" between new/classical and indie/pop music. The festival is the brainchild of NewAm's Judd Greenstein, whose uber-inclusive label has become the local nexus of this kind of cross-pollination.

Tickets are $25, or you can purchase a four-concert subscription for the sort-of-discounted price of $80. Watch the video below for more info. For the second time in two weeks, I found myself in Kleinhans Music Hall this past Saturday for a concert by the Buffalo Philharmonic Orchestra. When I last saw them, they played music by Gershwin, William Schuman and Buffalo-native Philip Rothman: evocative, picturesque, not particularly substantial.

This time, things were far more serious. After opening with Kodaly's dancy Marossek Dances - a late and unfortunate replacement for Einojuhani Rautavaara's Isle of Bliss - Lynn Harrell joined the BPO for Elgar's Cello Concerto: a sweeping, dramatic 30-minute work that's become a cornerstone of the cello repertoire. Harrell, who turns 67 next month, soldiered his way through the intensely physical piece; if his performance lacked the passion and presence of a Yo-Yo Ma, I give him props for even attempting to pull it off. After an enthusiastic standing ovation, Harrell spoke charmingly about how good it was to be back in Buffalo ("I have so many old friends here...I can't believe how old everyone's gotten!") then played the Gavotte from Bach's Cello Suites. 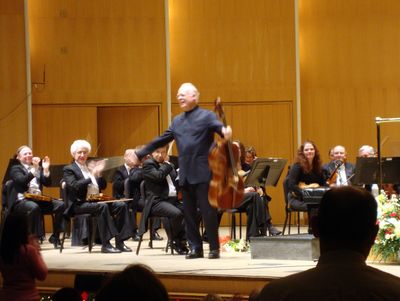 But, the main course came after intermission, when Music Director JoAnn Falletta led the BPO in Brahms' 4th Symphony: a true test for any orchestra. (See my post about the NY Phil's performance with Maazel in 2007.) Indeed, this is music that requires disciplined, empassioned playing from all parties, including the conductor. (As if to put aside any doubts as to her authority, Falletta conducted the symphony from memory.) And, aside from some occasional warbling in the brass, the BPO unleashed a top-flight performance, surging and shining like some great metropolitan orchestra.

This, for me, was the real eye-opener: that this symphony, which I've seen played by Philharmonics from New York to Berlin, can get a completely legit performance by this regional orchestra on the shores of Lake Erie. And, while most Buffalonians may not have known the difference, it says a lot about the dedication and heart on the part of these musicians to want to pull off a performance of this quality, not knowing who might be in the audience. (It also says a lot about Brahms' thoroughness in providing them with a proper roadmap.)

For her part, Falletta, whom I got speak to briefly after the concert, deflected all praise to the musicians. "They played the heck out of it, didn't they? Gosh, they worked so hard on it. I'm so proud of them." As she should be. 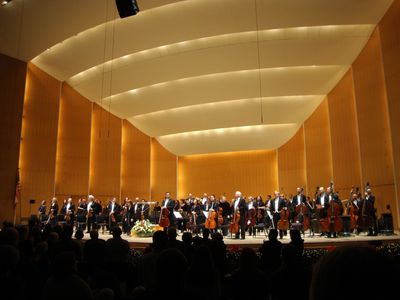 In 2007, I had the chance to experience a Karlheniz Stockhausen performance at the Auditorium della Musica in Rome. Sitting behind a massive soundboard at the center of Sinopoli Hall, the iconoclastic composer unleashed a torrent of electronic sound, via speakers placed around the perimeter of the hall. It was alternately jarring and soothing, putting the packed house into some kind of collective trance.

After ambling up on stage to receive a standing ovation, Stockhausen returned to the soundboard where he signed programs and chatted with various concertgoers, most of whom were under 30. In the brief moment I had to speak with him, I told him that I hoped he would come to New York and share his music with our own young, musically diverse community.

Sadly, Stockhausen passed away in December of that year. But, his music continues to inspire an almost religious devotion, as evidenced by the overflow crowd that jammed Issue Project Room on Thursday night to hear a program of his works from the 50's and 60's. The concert was part of this week's Darmstadt Essential Repertoire Festival curated by Zach Layton and Nick Hallett, who said they started the series seven years ago because they wanted "to play their favorite records in public." (Other concerts on the festival, which ended yesterday, featured Luciano Berio's Sequenzas, and Philip Glass' "Knee Plays" from Einstein on the Beach.) 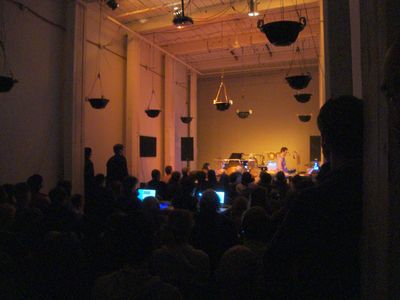 The first 1/2 hour consisted of a "lecture" Stockhausen gave at Columbia University in 1960 on his approach to music, illustrating his dense, mathematical process with a variety of electronic and pre-recorded sounds, layered one on top of the other. As crazy as it sounded bouncing around Issue's open-minded walls, I can only imagine what people must have thought sitting in that lecture hall 50 years ago.

That was followed by 1956's Gesang der Junglinge ("Song of the Youths"): a bizarre, otherworldly work generally regarded as the first successful piece of electronic music. Lasting about 20 minutes and projected via four single-channel loudspeakers, it seamlessly integrated the singing of a 12 year old boy with matching electronic sounds. Composed as a work of total serialism, every element was carefully planned out: pitch, duration, dynamics, and timbre.

The first half of the program ended with Kontakte (1958), which Zach correctly referred to as "one of the masterpieces of electroacoustic music." The surprisingly visceral piece ebbed and flowed for the better part of an hour, the electronic music pulsing from one set of speakers to the other, accompanied by live piano and percussion. The piano was played by Denise Fillion, while the huge battery of percussion (including gongs, bells and massive bass drums) was manned by Chris Graham of the Iktus Percussion Quartet, who said beforehand how thrilled he was to have the chance to perform it. (Iktus returned after intermission to perform Mikrophonie I (1964), which unfortunately I had to miss.)

In a way, it didn't feel completely correct to hear these works performed without Stockhausen himself sitting at the soundboard: indeed, it took three sound engineers with MacBooks just to fill his place. But, even though Stockhausen never made it back here to perform his music for us in person, its nice to know that we have the technology and desire to faithfully reproduce these works ourselves, whenever we choose. I can't imagine any composer would be disappointed with that outcome, not even Stockhausen. 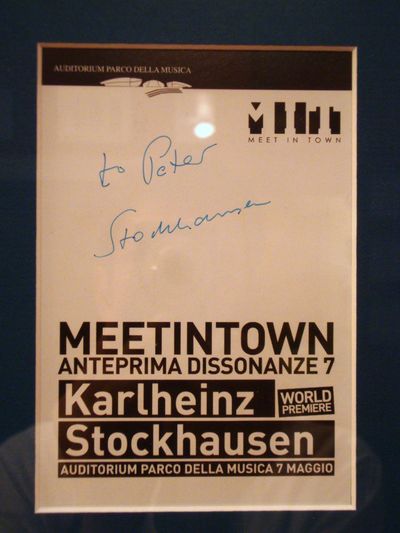