A quick reminder that the inaugural Ecstatic Music Festival is taking place all this week at Merkin Concert Hall, with events that have already included Monday's 7 1/2 hour Marathon and last night's collaboration between Nico Muhly, Valgeir Sigurðsson and the Chiara String Quartet.

Tonight's show might be the most radical of the bunch, featuring So Percussion performing (and collaborating) with Dan Deacon. Hard to tell what to expect, but according to So's Eric Beach, "This might be the craziest thing we've ever done." See below for a video that tells the story.

More on all of these concerts - as well as an interview with festival curator Judd Greenstein - soon to come.

The Phil Goes To the Movies 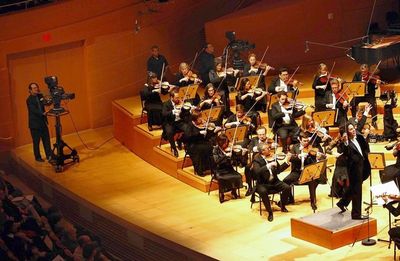 (photo: Genaro Molina, Los Angeles Times)
So, everyone knows by now the success the Met has had with it's live HD broadcasts to movie theaters all around the globe. But, when the LA Phil announced last year that they would start doing the same with select Sunday matinee concerts from Disney Hall - a venture emphatically called LaPhil LIVE - one had a right to be suspicious. Without the visual element of opera, what would cameras focus on, other than L.A.'s young and photogenic music director, Gustavo Dudamel? How would the sound compare to being inside the concert hall (esp. one as acoustically wondrous as Disney Hall?) Would theatergoers be loudly munching on popcorn throughout the performance?

As those who were following my live tweets already know, the behind-the-scenes footage - modeled after the Met broadcasts - was a mess. Host Vanessa Williams came off as stiff and artificial, relying heavily on cue cards - when the dude with the iPad managed to get himself in position, that is. Backstage technicians seemed frantic and hapless when they found themselves in the camera's unforgiving path. Even LA Phil President Deborah Borda seemed unsure of herself while being interviewed by Williams. Jeez, didn't you guys block this out beforehand??? 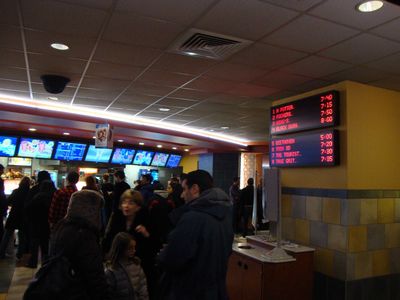 The only one who seemed unflappable amidst all this chaos was Dudamel, who mugged for the camera and cracked jokes (When asked to identify the clear liquid he was gulping backstage, he growled: "Tequila!") moments before striding confidently onstage. Duda, who turns 30 later this month, fortunately hasn't had to unlearn how to be a Divo. Yet.

The camerawork was also haphazard. Too often, the camera would cut away from the musicians just at the moment of crescendo to a pointless pan of the ceiling. The closeups of Duda were of random length and timing. And, for all their playing prowess, orchestra musicians tend not to be the most photogenic bunch: noone really wants a closeup of a bassoonist's distended cheeks, or a violist's sweaty brow. 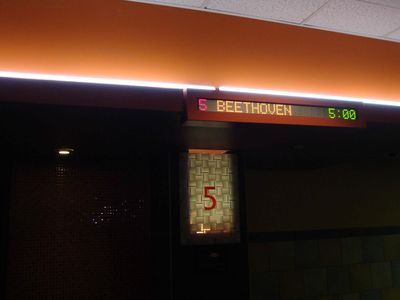 But, enough about the negatives. The audio, projected in full HD surround sound, was loud, penetrating, and crystal-clear. (Unfortunately, the digital mics also picked up the persistent coughing of the in-house patrons.) And the audience, at least in the Regal Union Square theater where I saw the performance, was cooperative and enthusiastic, clapping after each piece as if they were part of the actual audience.

What really made things fly, though, was the program Duda chose for the broadcast. Kicking things off was John Adams' Slonimsky's Earbox (1995): a wild, propulsive piece for large orchestra, full of clanging cymbals and bass drums that rolled through the theater like a runaway train. Bernstein's "Jeremiah" Symphony, which featured the talented young soprano Kelley O'Connor, exhibited a range of emotion: from fiery rage to desperate sorrow. As the music quietly faded at the end, the camera closed in on Duda, holding there as he held the silence for what seemed like an eternity. (Remember, this was all done live.) 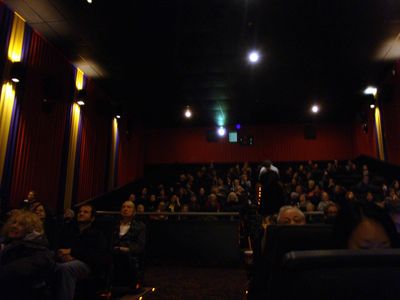 But, what really impressed was Beethoven's 7th, which Duda and the Phil took at a furious clip, and completely nailed. And, in this case, seeing made all the the difference: I was blown away by the energy and precision of their playing, bringing to mind Vienna or Berlin the way the string players dug into their instruments.

Adams - who, as it turned out, also watched the performance from the Regal Union Square  - apparently agreed, telling the NY Times that the LA Phil displayed "a level of playing I haven’t heard in that particular repertory.” As for hearing his own music performed in a movie theater, he said: "I was so excited I went through half a bag of popcorn."

The next LA Phil LIVE broadcast is set for March 13 and features an all-Tchiakovsky program, also conducted by Dudamel. Tickets available online or at one of 450 theaters across the country. It's worth checking it out, especially if they manage to work out some of these kinks. And, hey, you never know who might turn up. 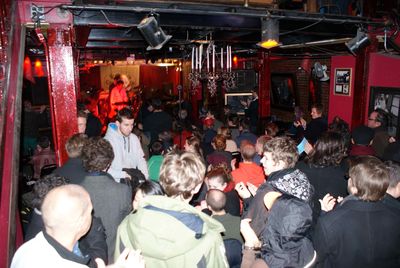 I spent six hours Saturday night at the Winter Jazzfest, and while some moments shone more brightly than others, it was all-in-all one of the most fun nights out I've had in a long time. For one thing, the crowds were less hellacious than they were Friday night, so you could actually bump from club to club without fear of getting locked out. It was also a reminder of the X-factor festivals bring to live music, be it rock, classical, experimental, or whatever floats your boat. By filling five clubs in a two-block radius with music from all ends of the jazz spectrum, it became second nature to compare notes with friends and strangers on what you'd just heard, or suggest a band to someone they might not otherwise go see. (The $25 all-in pricing certainly didn't hurt, either.) 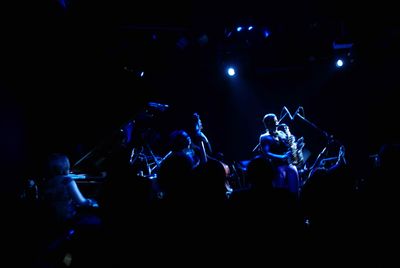 I spent most of the night at LPR, which housed most of the big names and offered the most floorspace of any of the participating clubs. (Kenny's Castaways across the street made for a good in-between-set refuge, with cheaper drinks and it's own solid lineup.) Saxophonist Tia Fuller (above) kicked things off with an athletic, straight-ahead set that included her sister Shamie on piano and brother-in-law Rudy on drums. Echoing the title of her latest release, she urged us to take "Decisive Steps" in 2011, leaving behind all the ups and downs of the past year. 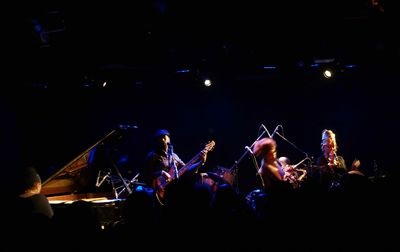 After a quick stop over to Kenny's to see Andrew D'Angelo's AGOGIC, it was back to LPR for the chameleon-like Don Byron, who seems to be up to something new every time I see him. This time out, he played clarinet and sax, but also sang backup to the astonishing DK Dyson, whose vocals were a mix of gospel and scat, throwing in a bit of Queen of the Night for good measure. As if that weren't enough, Geri Allen joined on piano, playing with such technical wizardry that Byron himself seemed completely bowled over. 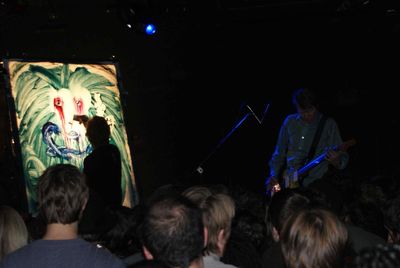 The idea of pairing a visual artist improvising to live music isn't new, but more often than not the resulting painting/drawing ends up looking like a scribble. Fortunately, Nels Cline had Norton Wisdom at his disposal, doing what basically amounted to sophisticated finger paining on a backlit screen while Nels shredded his guitar in apocalyptic horror. Trees morphed into animals, gods became demons, the Earth melted into a horrifying skull with piercing red eyes. Widsom's hand was so sure, and Nels' playing so complex and pitch-perfect, it was impossible to believe that either was improvising. The fact that both were was completely dumbfounding. 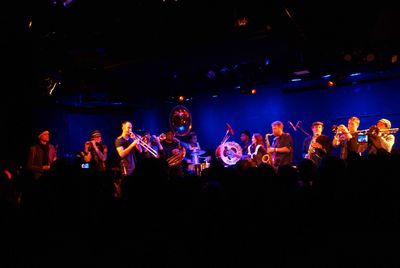 After Nels, we were treated to a surprise "interlude" by the Asphalt Orchestra: a 12-piece big band who played a couple of quick numbers guerrilla-style. I'm not sure if these erstwhile Bang on a Can peeps technically qualified as jazz - they were more Slavic Soul Party than Secret Society - but it was way fun to listen to. 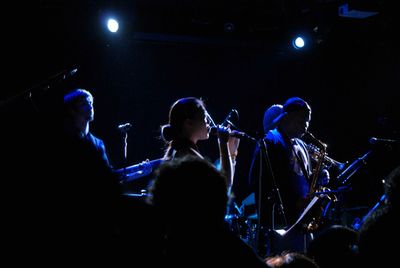 After what felt like an especially long delay while they got their levels checked out, Steve Coleman and his band Five Elements took the stage. Maybe I was getting tired and cranky at that point, but the muddled ensemble playing and indecipherable female vocals (contributed by Jen Shyu) didn't really do it for me. 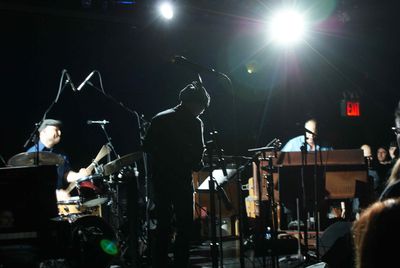 So, it was a joy to come back to LPR - after a quick hop over to Kenny's to hear Uri Caine with the Donny McCaslin Trio - to hear RedCred (a.k.a. Chris Speed (S), Ben Perowsky (D) and John Medeski (Hammond B3, baby) blow the roof off with a lightening set that spilled over with joyous energy. For Chris, at least, this was his second gig of the night, having just played an Endangered Blood show with Oscar and Jim over at The Stone. And, Ben had to stick around to close out the night with his Moodswing Orchestra, going on somewhere south of 3am. 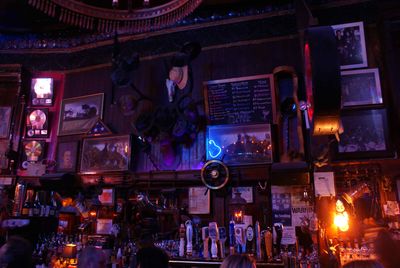 But, for all the great music I heard, the best part of my night came while I was chowing down on a chicken sandwich at the bar at Kenny's, listening to the James Carney Group. That's when I got to talking to Don: an expat from Boston who's been catching live jazz in NYC for the past fifty years. Don's seen it all: Coltrane, Monk, Mingus screaming at the audience, Billie barely hanging on. I asked him what he thought about the festival, and the state of jazz in general.

"There's so much amazing music out there now," Don told me. "So many young, talented players. But, everyone playing now is chasing after those early guys, trying to hit that same high Trane or Monk used to hit. And, it just isn't there, not that I've heard. If it's gonna happen, it'll have to come from somewhere deep inside."

After we paid our tabs, I dragged Don over to Nels' show at LPR - he'd never heard of Nels before - but we lost each other somewhere between the bar and the bathroom. So, Don: if you did manage to stick around, I'd love to hear what you thought. And, hope to see you out again sometime. 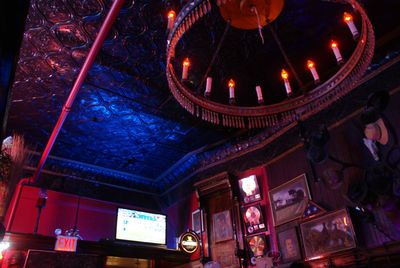 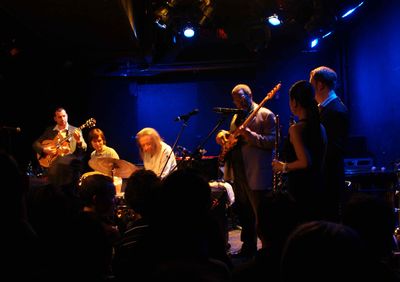 I was late arriving to LPR last night for the first night of the 2011 Winter Jazzfest, but made it in time to catch legendary drummer Chico Hamilton and Euphoria. Chico, who turns 90 this year, has been a band leader since 1955, having worked with everyone from Duke Ellington, to Count Basie, to Lena Horne, with whom he played for six years. Chico has let himself go a bit since the last time I saw him in 2007 - his hair is long and gray, and he walks with a cane - but he is as sharp as ever. He cracked jokes, showed off his delicate brush technique, and occasionally chided his younger players for coming in early or late. What is it about these jazz drummers - Chico, Roy Haynes, Paul Motian - that keeps them young well into their 80's? 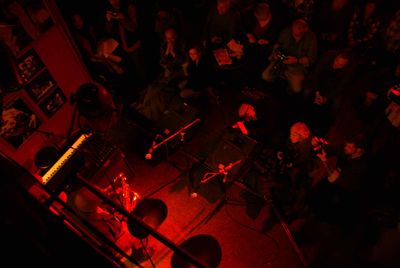 After, most of us wandered en masse across the street to Kenny's Castaways, filling the former 19th century saloon well beyond capacity. I pushed my way through the crowd and managed to watch free jazz saxophonist Charles Gayle and his trio from the wrap-around gallery above the stage. Gayle, 71, lived on the streets of NYC for over 20 years, with his career only taking off in his mid-50's. He played tenor like a man possessed, driven by the same spiritual fervor as Coltrane and Cecil Taylor.

By the time I got to Zinc Bar up on 3rd St., there was a line of wristband holders around the block - and a gaggle of pushy old jazz heads trying to weasel their way in - so I hightailed it back to Brooklyn. But, I'll be back later tonight, as the Winter Jazzfest expands to five venues. The music kicks off at 6pm and goes 'til the wee hours. Details and tickets on the festival website.