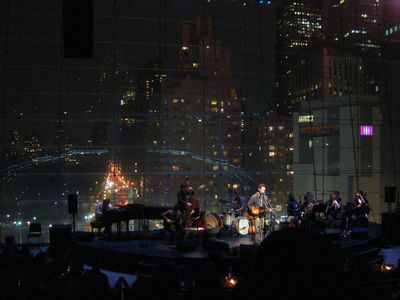 Full confession: I've probably listened to Alexi Murdoch's Time Without Consequence sever hundred times. It's the kind of album that gets under your skin, and stays there: quiet,  melodic, but with a dark, brooding intensity bubbling just beneath the surface. So, imagine my excitement when I learned a couple of months ago that Alexi would be performing on Lincoln Center's American Songbook series.

Alexi, who has a loyal and dedicated following, doesn't play many shows - and never on a stage as grand as the Allen Room. "I'm a bit nervous up here," he admitted early on. "And I never get nervous at gigs." His set covered tracks from both Time Without Consequence and his new album, Toward The Sun, to be released next month.

As with other American Songbook shows, Alexi amplified his core band with brass and strings, which provided a subtle underpinning to his deft guitar playing. He's hardly an imposing presence - he looks just like any other hipster whith his full beard and hooded sweatshirt - but his deep voice and sophisticated sound had the room spellbound from start to finish. In an age where credibility seems to be aligned to vapidity, it's reassuring to see someone willing to go further, deeper. And, he's just getting started. 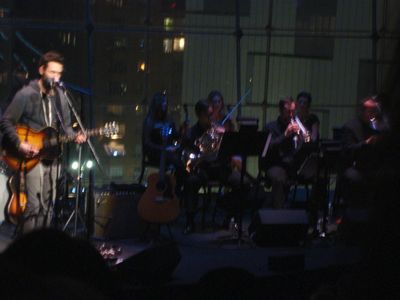 A Cathedral Without Crosses 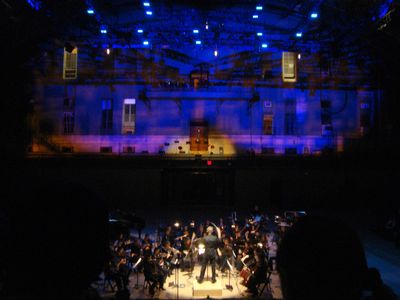 What is going on in NYC these days? What is it with all of these uptown institutions importing downtown music - you know, the kind that's usually heard in Brooklyn lofts or pass-the-bucket bars? First, there was the Ecstatic Music Festival over at the Kaufman Center, then there's Tully Scope, which kicks off at Lincoln Center next week. (More on that soon.) And now, we have the Tune-In Music Festival: a four-concert mini-festival of new music happening all this week in the Drill Hall of the Park Avenue Armory, right in the heart of the Upper East Side. Is this just slumming for rich people, or what?

Whatever the motivation, it's high time these brave, brilliant artists got access to a stage and audience worthy of their invention. This marks the first season of indepedent programming for the Armory: a cavernous space which has previously served as a satellite venue for various Lincoln Center presentations, including 2008's Die Soldaten (which I saw) and 2009's Stifters Dinge (which I should have seen, but missed due to my own tardiness.)

To inaugurate this bold new entry to the NYC music scene, the Armory commissioned a new work that would take full advantage of the massive space, not unlike other site-specific performances in recent memory. Dubbed ARCO, the 80 minute work was a collaboration between Paul Haas, Bora Yoon and Paul Fowler, and performed by a modular orchestra (conducted by Haas) that grew and shrank as members dispatched to various balconies around the hall. (Well, half the hall, as the risers were placed in the center facing the main doors.)

The work, an elegy of sorts on the horrors of war and our failure to heed the warnings of prior generations, echoed with all the weight of the hall's history as both performance venue and practice site for armed battle. Elements of decay were threaded throughout, as when the orchestra performed the Allegretto from Beethoven's 7th symphony, only to disintegrate like a warped record into Fowler's Building. Which then alternated back and forth with various motets by William Byrd. Which was followed by Bora's electronic hisses and rattles broadcast in multi-channel surround sound. Which in turn was followed by...(you get the picture.)

Perhaps the strangest moment of the night was when bass Charles Sperry Sprawls sang Haas' Eyebud (3002), apparently a 2003 speech by George W. Bush written backwards. Dressed in a gray military-issue overcoat with a mysterious red stain on the collar, Sprawls was an imposing, menacing presence. Unfortunately, the words were indecipherable, even after the real-time replay in reverse.

Bora appeared not long after in the far-off balcony dressed in a traditional white Korean garment, her wordless soprano soaring over the Tibetan singing bowl she simultaneously played. Then, Bora being Bora, she took a mini mirror-ball and slowly lowered it onto an ancient Victrola, the crackling reverberating all around the hall. Somehow, it came across as both magical and impish, violent and healing.

ARCO ended with Haas' mysterious Samadhi: an extended benediction named for the Indian state of enlightenment, with the string players digging deep and the brass sounding fanfare from the balconies. It ended quietly with the concertmaster slowly walking off stage, playing softly as she disappeared beneath the risers.

While ARCO would have benefitted from a further distillation of its overall message, the ambition and scope of this major new work was impossible to ignore. As was the majesty of this grand new performance space, which seems to be custom-built for the Epic: a role previously consigned to sacred spaces like St. John the Divine or St. Paul the Apostle. Here's hoping the Armory's trustees keep those massive oak doors open to the adventurous and unfamiliar, for the benefit of everyone, downtown or uptown.

Bummer that I'll be out of town this weekend, or I would definitely be checking out this Ecstatic Music Festival show on Saturday, with local vocal ensemble Roomful of Teeth performing new works by Caleb, William Brittelle and - yes - tUnE-yArDs. What Merrill does in the video alone is completely crazy, and really makes me wish I was sticking around. Do yourself a favor and check it out if you're spending the holiday in NYC. 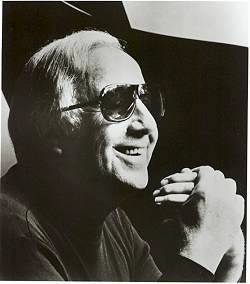 One of the most elegant and virtuosic jazz pianists and arrangers of all time, George Shearing passed away this morning in Manhattan. He was 91. Times obit here. And, go here to listen to one of George's four appearances on Marian McPartland's Piano Jazz, where they shared their delightfully British charm, wit, and - above all - love of music.