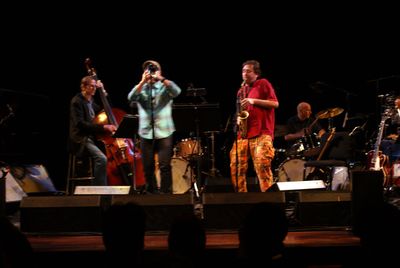 Well, not everything. For that, you would have had to show up at NY City Opera last night, where composer/musician/downtown hero John Zorn hijacked the the State Theater for nearly four hours with a marathon concert led by various groups he's been associated with over the past 20 years. Zorn, whose La Machine de l’être is currently being performed by as part of City Opera's Monodramas, has spent most of his career south of Houston Street, so witnessing him onstage at City Opera - wearing his standard uni of floppy t-shirt and camo pants - was like seeing a three-legged mongrel compete at the Westminster Dog Show. Or something.

Last night's show consisted of excerpts from Zorn's The Book of Angels: a massive tome of over 300 pieces Zorn wrote during a ridiculously prolific three months in 2004. As he put it:

"After 10 years of performing the first Masada book, I thought 'Maybe it'd be nice to write some more tunes' So in the first month, I popped out a hundred tunes; the second month, another hundred; in the third month, a third 100 tunes. I had no idea that was going to happen."

Kicking things off was Zorn's longtime ensemble, the Masada Quartet: with Dave Douglas (trumpet) and Zorn (alto sax) blasting way while Greg Cohen (bass) and Joey Baron (drums) kept them on the ground. Violinist Mark Feldman and pianist Sylvie Courvoisier were soft and melodic. Banquet of the Spirits, an electric quintet led by the irrepressible Brazilian percussionist Cyro Baptista, were wild and freewheeling. A cappella vocal quartet Mycale sounded like the children of Meredith Monk, singing a mix of Latin, Hebrew and Arabic music. Medeski, Martin and (Trevor) Dunn - bassist Chris Wood is out on tour with the Wood Brothers - lifted the roof a few inches with their explosive jams. And Bar Kokhba (Marc Ribot, Eric Friedlander, Baptista, Cohen, Baron) played a concerto-of-sorts that vacillated between lounge music and industrial proto-punk.

And that was just the first half.

I would have loved to have heard Uri Caine, the Masada String Trio and, most of all, Electric Masada, but, hey, it's a long way home from uptown on a Wednesday night. As Zorn himself would agree. 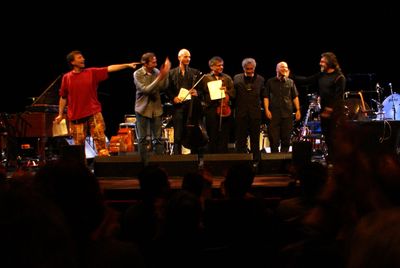 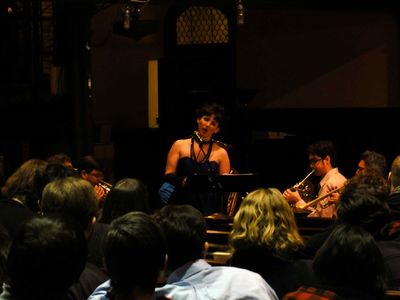 I paid a visit to Wil Smith's fun and casual Music at First new music series on Friday, housed at the First Presbyterian Church in Brooklyn Heights where he serves as organist.

The double bill kicked off with Mellissa Hughes singing music by Ted Hearne, Eric Shanfield and selections from Gabe Kahane's Craigslistlieder, all accompanied by Timo Andres on piano. But, the real headturner was Jacob Cooper's "Silver Threads," with it's cool, downbeat electronics. Corey Dargel's "Last Words from Texas" also offered electronics, set to the final musings of Texas death row inmates. Matt Marks and the Brooklyn Brass Quartet (BBQ for short) served up a trio of funny, mildly filthy songs in I[XX].

After intermission, we all trucked upstairs to see Lorna Krier - billed here as "Dune" - perform in the dark on a battery of synths and pedals in the organ loft, seemingly thumbing her nose at the massive pipe organ looming above. Lit only by a series of abstract projections on the ceiling (courtesy of Jon Williams), the music was like a cross between Noveller and High Places: elegant and primal, meandering and soaring - and defintely not church-worthy. 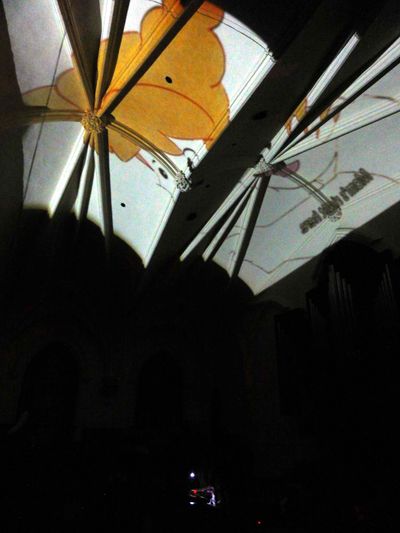 Toronto pianist/composer John Farah was back in NYC last week, performing his unique brand of music that seamlessly blends classical, middle-eastern and electronic elements. Several of the compositions from Thursday's program at downtown's Alwan Center for the Arts were new since his appearances here last year, most composed during a residency he was awarded in Toronto last fall.

"Mercurial" was an intense swarm of arpeggiated chords, flecked with elements of jazz, funk, even Latin music. "Distances" was more spacious and surreal, using a heavy pedal to create a Messiaen-like spectral shade. "Sama'i Point" was quick and precise, played with the wild ecstasy of a whirling dervish.

As an encore, John played a prelude he wrote the day before, performing it flawlessly from his handwritten notebook. It was a minor-miracle: starting out with the Baroque precision of Bach, it soon morphed into something far more grotesque and gripping. John told us that he's been living in Berlin for the past few months, and while he's no doubt absorbed that city's dually-rich heritage in classical and electronic music, there's clearly something about NYC that gets his juices going.