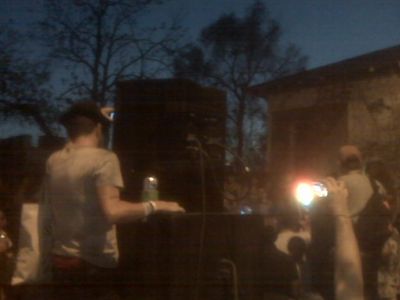 Dan Deacon made his one and only SXSW appearance tonight to a packed crowd out back of Cheer Up Charlies tonight. Unfortunately, he was pretty much dialing it in, and the crowd was Much less mannered than the good Canadians and NYers I saw him perform to in composer guise last month. Not to mention some kid stole my beer and dumped his own contraband booze in the cup. Yeah, I think its almost time to go home... 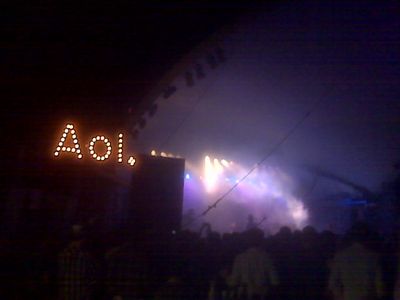 I've just arrived in Austin direct from Cancun for the 2011 edition of SXSW, which at first glance looks to be bigger (and badder) than ever. I'm chilling out tonight at Stubbs, where AOL is hosting a solid showcase under the stars with Noah and the Whale, Portugal. The Man, and TV on the Radio. The sausage and brisket is pretty good, too.

Full disclosure: I'm here this year thanks to the day job, through which I do business with one of this year's platinum sponsors. Which means I am, for the first time, a Platinum badge holder, giving me full access to the convention floor and all official showcases, in addition to all the unofficial day parties that have always been this thing's real charm. Good thing I already got those Mexico pics off my camera...

Stay tuned for updates throughout the weekend. 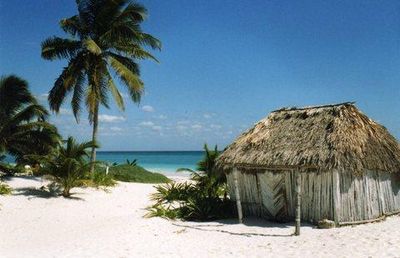 This time tomorrow, I'll be in Mexico where I plan to do little other than sit on the beach, sip a margarita, and work on my suntan. Maybe tour some Mayan ruins. Regrettably, I'll be missing some key music events back here in NYC, including a pair of Ecstatic Music Festival shows and the entire remainder of Tully Scope, including what looks to be an amazing event on 3/18 with Heiner Goebbels. Sorry Judd and Jane: sometimes even I need a bit of a break.

On my way back, though, I'll be touching down in Texas for the 25th edition of SXSW, which looks to be more of a madhouse than ever. What can I say: I just can't help myself.

If you're not making the pilgrimage to Austin next week, definitely try to catch one of the four Godspeed shows Ronen's putting on at the Church of St. Paul the Apostle and the Brooklyn Masonic Temple. All four shows are sold out, so check the usual places for tickets.

Otherise, see you in Austin! 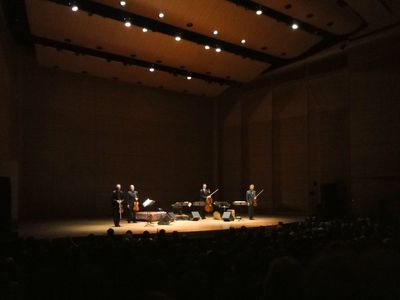 Readers of this site know that I've got a major thing for string quartets: over the years, I've seen everyone from legends like the Emerson, Juilliard, and Kronos, to upstarts like the Calder, Chiara, and ACME (to name only a few.) So, when the opportunity presented itself last night to see a pair of quartets performing non-standard repertoire within a block of each other uptown, I couldn't help myself.

First up was Brooklyn Rider who, given their warm reception last night at the Tully Scope Festival, are clearly the front runners to inherit the mantle of the Great American String Quartet. Like the Emerson, Brooklyn Rider - all in their early 30's - stand while they perform, allowing for maximum movement and expression. Like the Kronos, they are tireless champions of new and world music, with several members splitting their time with the Silk Road Ensemble.

They literally bounced onto the stage, launching straight into Giovanni Sollima's rollickng "Federico II": a short 8-minute piece that swung and snapped like an Appalachian dance. Totally rocking, leaving the whole place whooping and hollering.

"We've been on tour for two months," cellist Eric Jacobsen told us from the stage, "and I can't tell you how great it was tonight to take the F, to the A, to Columbus Circle - where the guy was playing xylophone just like he always does - to beautiful Alice Tully Hall to premiere this new string quartet by Philip Glass." 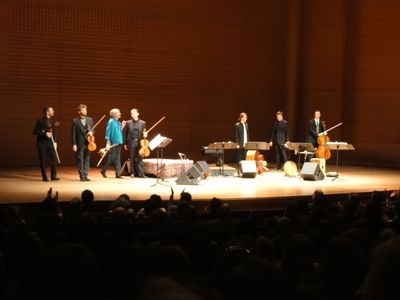 Glass's premiere was actually written in 1991 for the film Bent, but had never before been performed in public. It's a close cousin of the five quartets he wrote between 1966 and 1991 (which Brooklyn Rider have recorded): minimalist in pitch and timbre, hypnotic in its overall impact. It ended hauntiingly with Colin Jacobsen's solo violin slowly dying away.

They were then joined by their frequent collaborator, Iranian Kayhan Kalhor, who played a small stringed instrument called the kamancheh on Colin's Beloved, do not let me be discouraged. Awkward title, but the music - inspired by a 2008 visit to Iran - was mysterious and beautiful. Like most Silk Road concerts, the music was amplified to allow for proper blending of all the instruments, but the sound could have used a bit more fidelity. The second show, an Ecstatic Music Festival program featuring Owen Pallett, Thomas Bartlett and Nadia Sirota, wasn't really a string quartet concert. But, Owen did put together a quartet - featuring himself and Rob Moose on violin, Nadia on viola, and Clarice Jensen on cello - to perform his own arrangements of songs from Heartland. Owen left the looping pedals at home, instead fiddling around with a Nord and some other electronics in between violin playing and singing out like a matinee idol from one of those theaters a few blocks south on Broadway.