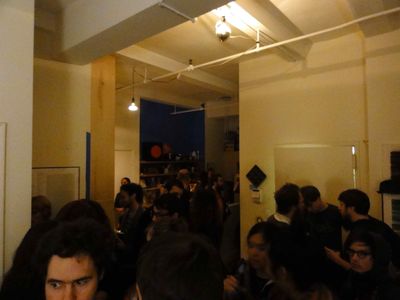 Tristan Perich and Lesley Flanigan - the "it couple," if you will, of the experimental electronic music scene - have been hosting parties in the apartment they share on East 24th Street for years now. Recently, however, they decided to turn these informal gatherings into a (roughly) monthly new music series called Stepgaard: basically a BYOB house party, with a performance taking place sometime between 11pm and midnight. On a wet and windy Saturday night, it felt like just the place to hang out, stay late.

Last night's event/party featured Danish sound artist Jacob Kierkegaard, who Lesley met when she spent some time in Amsterdam last year. Kierkegaard performed AION (2006): a spacious, hour-long drone while haunting images of abandoned churches and factories in the Chernobyl radioactive zone were projected onto the wall. Kierkegaard personally made the field recordings in four abandoned spaces: he made a 10 minute sample, then recorded over the playback multiple times until it eventually became a single humming sound with multiple overtones. With the recent nuclear disaster in Japan still very much in the headlines, the relevance was all-too-creepy.

But, this being a party, Jacob switched immediately after to being DJ, playing West African dance music into the wee hours. Or, at least until the beer ran out.

The next Stepgaard will feature pianist Isabelle O'Connell on June 10; details on the website. Bring a drink. Or several. 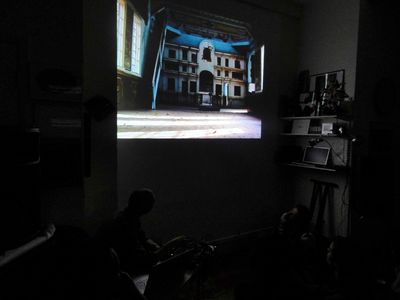 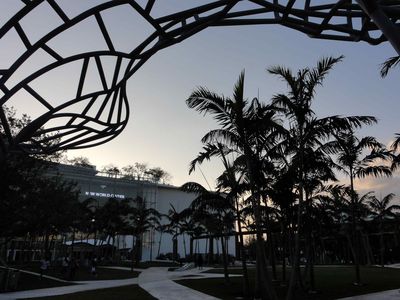 Miami may not be the first place that comes to mind when people think of destinations for classical music. (Last weekend's Ultra Festival is probably more like it.) But, in recent years, this sun-baked city has spent hundreds of millions of dollars in an attempt to prove that warm weather isn't necessarily incompatible with world class culture. In 2006, for example, the Arsht Center for the Performing Arts opened in downtown Miami: a huge, sprawling complex originally intended to house the Florida Grand Opera, the Miami City Ballet and the Florida Philharmonic. Unfortunately, that latter organization went belly-up long before the Arsht Center was completed; they've since been replaced with a rotating roster of orchestras, including the Cleveland Orchestra.

But, if my visit to Miami weekend-before-last is any indication, the real hope for classical music in South Florida lies across Biscayne Bay in Miami Beach, where the New World Center - a sprawling complex designed by Frank Gehry - opened in January. In addition to rehearsal studios and administrative offices, the center contains a 700 seat auditorium that is essentially a small-scale replica of Gehry's Disney Hall in L.A, both in appearance and acoustics. The audience sits on all sides of the orchestra, with the seats bunched in groups It's not entirely clear how much the center cost, but on the wall outside the auditorium, one anonymous patron alone had given $100 million towards its construction. 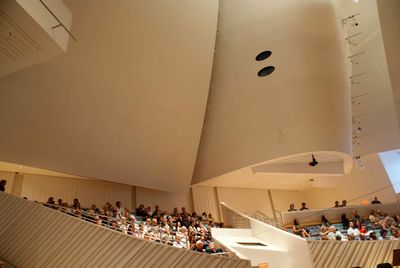 Perhaps the most amazing thing about this sparkling new hall is that it was built for the New World Symphony: a non-professional orchestra of post-conservatory musicians. The fellows, as they are known, spend three years learning all the ins-and-outs of live symphonic music, at the feet of some of the world's greatest soloists and conductors - none greater than Michael Tilson Thomas, who founded the orchestra in 1987 and still finds time to return every year.

Part of MTT's mission with New World is to prepare these young fellows to play any kind of music put in front of them: sure, they can play the hell out of Beethoven, but what happens when something completely unfamiliar is put in front of them, such as jazz or new music? Kind of like what Jimmy did at Tanglewood, teaching the fellows Wagnerian opera in 2005, and again in 2009. 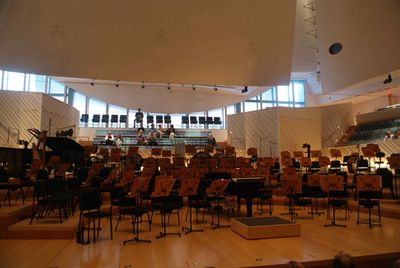 Enter John Adams, who conducted a wide-ranging program of music from the 20th and 21st centuries. For those who know Adams primarily as a composer, he's been nearly as visible in recent seasons as a conductor, leading performances of both his own music - he conducted Nixon In China last month at the Met - and others. Indeed, in remarks he made before the concert, Adams demonstrated his thorough and comprehensive knowledge of 20th century music, remarkable given his own (significant) place in it.

Adams explained that the common thread between the works on the program was that they were each unique products of their surroundings. Case in point: Julia Wolfe's Aresenal of Democracy (1993) which she wrote while living in Amsterdam for  a year. She wrote it for the street band Orkest de Volharding, founded by Louis Andreissen and others. When pressed by Adams, though, Julia admitted that she actually finished the piece, "right here in Miami Beach, where my husband's parents live." (That would be Michael Gordon, FYI, who talked about his relationship with Miami Beach in the Times last year.) 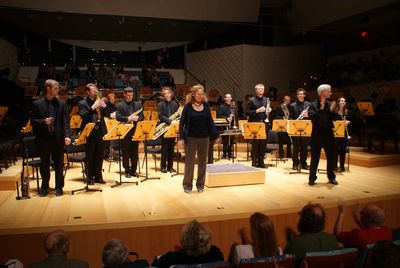 Julia said that Arsenal of Democracy takes its name from a WWII speech by FDR, referring to what he saw as the United States' role as arms supplier to the Allies, prior to Pearl Harbor. Fittingly, the piece was overpoweringly loud, with electric bass and piano dueling with brass ensemble. Julia's intentions were clear: music can be a far more powerful weapon than bombs in the fight to preserve democracy, a lesson apparently lost on Congress in their recent budget negotiations.

Following the theme of "inspired surroundings", Adams explained that Bartok wrote his Dance Suite (1923) during the period he was studying gypsy folk music in rural Hungary, and the influence on his own music is evident, filled with modal themes and folk-like melodies. The performance by the full symphony was full of brilliant color and clarity, as bubbling and electric as the better-known Concerto for Orchestra. 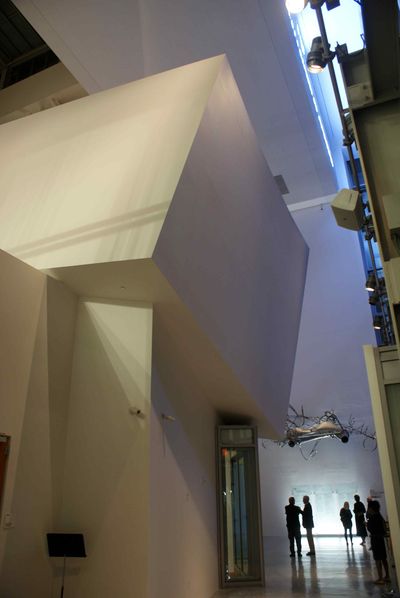 After intermission, Adams introduced his own City Noir, which he wrote in 2009 for the LA Philharmonic. Adams said that he wanted to write an "imaginary film score," improving upon the campy music written for the Hollywood noir films of the late forties and early Fifties, all of which have a David Lynch-like strangeness to them.

"I think it's appropriate that we're performing this in Miami Beach," he said to numerous chuckles. "I was walking down the street the other day, looking for gelato, when I saw a man, my age, wearing nothing but dark sunglasses and a bright yellow thong." After the audience recovered from their uncontrollable fits of laughter, Adams smiled and said, "Let's go for a ride."

The music was heavily influenced by jazz, employing sax, trumpets and drums (the latter played by Miami Beach-native Sergio Carreno), evoking images of bullets and sirens in a dark, brooding cityscape. At the end of the third and final movement, "Boulevard Night", the work climaxed in a terrifying explosion of brass and percussion. After it was over, Adams beamed, flashing a thumbs-up sign all around.

Playing a new work by one of the world's greatest composers, in a jammed house with the composer himself conducting? I can't imagine a greater thrill. Remember it, kids. 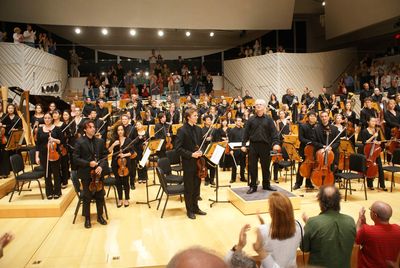 Shame to spend such a nice day indoors, but having just heard Riccardo Muti conduct an impossibly grand performance of Liszt's Les Preludes, the sun is shining inside, too. Damn, that CSO brass is no joke. 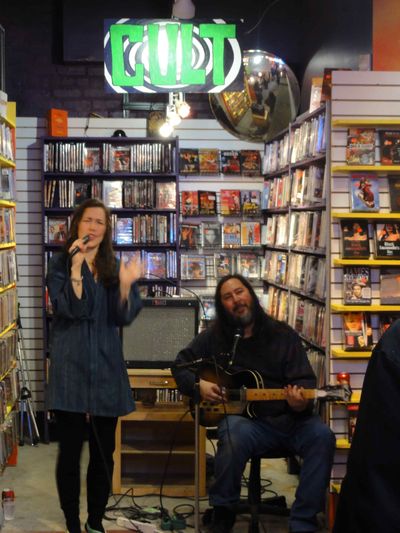