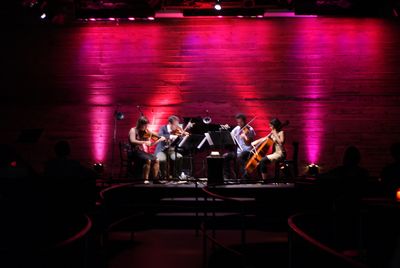 It's not every day that you get an entire evening of brand new music - especially not in a place that serves cocktails - but that's precisely what was on tap last night at Galapagos, where the MIVOS Quartet and Redshift played a double bill of all-world premieres that straddled the worlds of acoustic and electronic sound.

Combining acoustic instruments with 1-bit electronics has proven to be a fertile ground for Tristan Perich, who demonstrated the continuing evolution of his process last night with Salt. The rudimentary beeps (amplified via a tweeter hanging onstage) were well-woven into the strings, but it often seemed as if the relentlessly repeating strings were following the electronics, vs. the other way around.

Samson Young's 17 was far more crude, the arcade-game-like electronics completely drowning out the strings, via speakers placed unstrategically around the room. It was like being stuck next to a pinball machine on "Tilt." 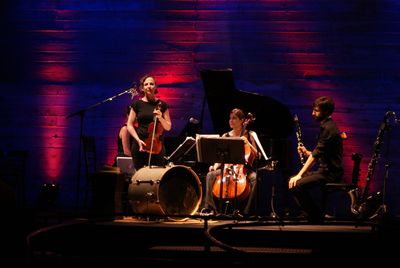 Redshift's violinist Andie Springer introduced the 2nd half of the program, explaining that the ensemble had commissioned ten composers to write pieces to accompany a series of field recordings made by Alaska native and sound artist Kathy Turco. Springer, an Alaska native, said that this was a personal project for her, bringing together both her native and adopted homes.

The collection of works, called Arctic Sounds, was performed uninterrupted, the pieces varying widely in texture and timbre. Among the highlights were a new arrangement of David Lang's Stick Figure: a plaintive melody that was continuously - and brutally - interrupted by drum and cymbal crashes. Richard Carrick's Sonic Tapestry combined George Crumb-like piano manipulations with the quietly menacing sounds of bears. And James Holt's Gallery offered a quiet, sad dirge for cello, violin and piano that was elegant in its simplicity. Other composers included Garrett Byrnes, Matthew Welch, Jad Abumrad, Kirsten Volness, Max Stoffregen, Mary Kouyoumdjian and Ryan Brown.

Overall the experience of Arctic Sounds was more atmospheric than directly engaging, and should have been shortened by at least 2-3 pieces. But, with such a rich new trove of music for their unusual makeup of cello, violin, piano and clarinet, Redshift now has material to fill out their programs for a long time to come. 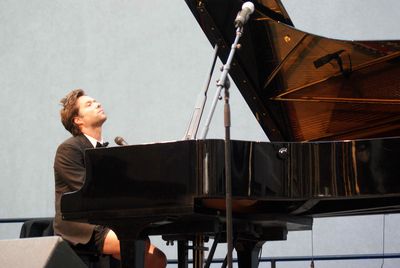 As is well known, singer-songwriter Rufus Wainwright was commissioned several years ago by the Met Opera to compose an evening-length opera, part of the same program that will bring Nico's Two Boys - which just had its premiere at the English National Opera - to the Met in 2014. But, after Peter Gelb dismissed Rufus' Prima Donna for it's French libretto, the opera was picked up by NY City Opera, who will give the U.S. premiere next season. City Opera General Manager George Steel (who, btw, has yet to reveal next season's plans after announcing that City Opera was abandoning their "long-time travertine home," the NY State Theater) introduced Wainwright Tuesday night at the World Financial Center's Winter Garden, part of this summer's River to River festival. " I've had the good fortune to see Prima Donna," Steel told a capacity crowd of over 1,000, "and I'm proud that City Opera will be presenting this exciting new opera for the first time in the U.S. next season." 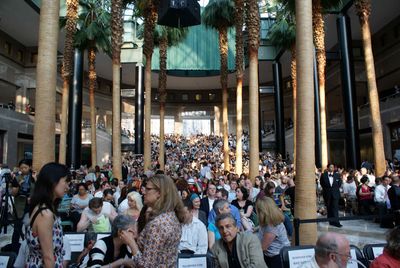 Wainwright, who cheekily strutted on stage wearing a tuxedo jacket, black tie and black boxers, returned the favor throughout the night. "Berlin, London, Moscow," he said, "of all the great cities in the world, New York needs two opera companies."

Wainwright has a life-long love of opera which he apparently comes by naturally: throughout the evening he told us stories about his grandfather used to sing Wagner arias ("The were the popular songs of their time"), and how his mother, the late folksinger Kate McGarrigle, would play Puccini by ear. 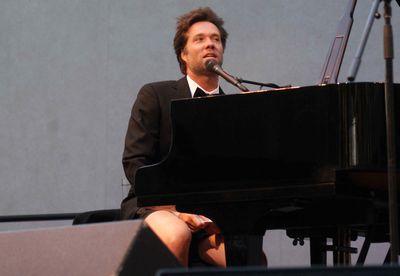 Tuesday's program, which was entirely chosen by Wainwright, mixed arias from both Prima Donna and some of his own favorite operas, along with some of his own songs. Appropriately enough, he started with dark and haunting "Damned Ladies," which name-checks a who's-who of dramatic opera heroines:

"Desdemona, do not go to sleep
Brown-eyed Tosca, don't believe the creep
I see it in his eyes...

Violetta, keep your man locked up
Or like Cio-Cio
You will end up burned by love or sickness...

Katya Kabanova, why did you marry him?
You knew his mother was a bitch
And would keep hold of him
Oh Pamina got away from mama
Before the age of Rambo opera

Damned ladies of Orpheus
Your arias cause a stir in my sad and lonely heart." 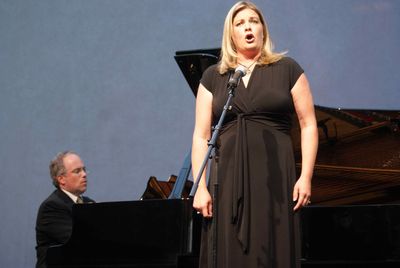 But, as engaging a performer as Wainwright is, he knew enough to bring along some heavy hitters to deliver the goods on the operatic side. He charmingly introduced each of the singers and talked a bit about why he chose each aria. "I'm very nervous around opera singers," he admitted at one point, echoing the sentiment often heard among rock/pop instrumentalists who find themselves on the same bill as classically-trained musicians.

Sitting perhaps 20 feet from the stage, I was nearly blown out of my chair by Laura Vlasak Nolen's huge mezzo voice, which she leant to "O don fatale" from Verdi's Don Carlo and the "Seguidilla" from Bizet's Carmen. Steel should seriously consider casting Nolen for the title role in Anna Nicole, if he's got the balls to bring it over. 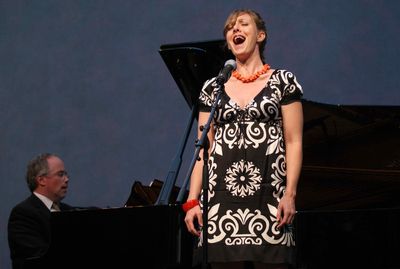 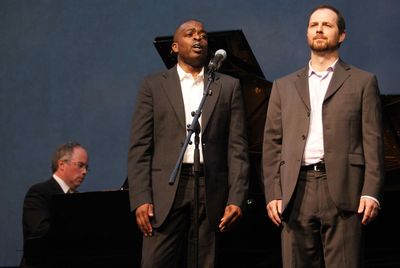 Tenor Robert Mack was tender - if a bit light - in his rendition of "Che gelida manina" from La Boheme. On the other hand, bass-baritone Matthew Burns was mature and engaging in Wagner's "O du mein holder Abenstern" from Tannhauser. They teamed up on the well-known duet "O fond du temple saint" from Bizet's Pearl Fishers. Wainwright did sing one aria from Prima Donna himself: "Les feux d'artifice," which reveals the title character's acknowledgement of her fading light as the onetime greatest singer in Paris. Whatever Wainwright lacked in operatic heft he more than made up for in tender emotion, his voice quavering like Thom Yorke's. It was the purest, most sincere moment of the evening. (Wainwright also sang two of his more popular ballads, "Who Are You New York?" and "Vibrate.") 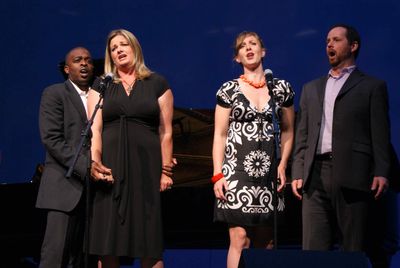 Finally, the entire quartet ended the evening with the Act III quartet "Bella figlia dell'amore" from Verdi's Rigoletto that brought the house down. (All of the opera singers were accompanied by the talented pianist Kevin Murphy.)

So, what are we to make of this? Clearly, the vast majority of the youngish crowd were newbies to opera, and were drawn by Wainwright's significant star power and talent as a singer of popular song. Will they fulfill City Opera's hopes and go buy tickets to Prima Donna next season? Doubtful. Did some of Wainwright's sincere amazement at the magic of opera rub off on them to make them want to hear more? Well, that would be cool. 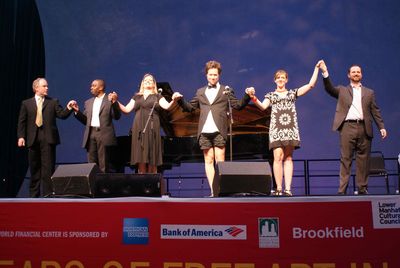 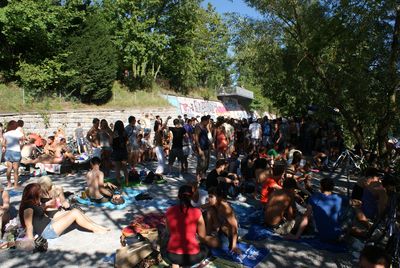 Zurich is a city with a lot less character than its Alpine counterparts, but isn't entirely without its charms. Especially on a beautiful, clear day like today, where the whole city seems to pour outdoors, plunging off quays and bridges into the crystal-clear waters of Lake Zurich. This was the scene at Letten: a "beach" of sorts along the banks of the Linmat River, just north of the lake, where young men and women hung out in a graffiti-decorated park, sunbathing and occasionally dancing to the better-than-average DJ. Sort of like PS1's WarmUp, without the architecture.

Closer to sunset, I wandered down to Seebad Enge, one of several public baths that ring the lake where you can have a drink and enjoy the view(s). Instead, I was treated to a performance by Cock to Cock: a trio of girl singers who sang a mix of covers and originals with acoustic guitars and occasional brass and beats. A local told me that it was part of a new bi-weekly series of unplugged shows on Sunday nights that runs through August: like a slimmed down version of the Pool Parties.

Speaking of the Pool Parties, from what I can tell, they aren't happening this year: the only shows happening on the Williamsburg Waterfront are paid shows, most of which go for $40 and up. (The Might Be Giants are playing a free show on July 29.) 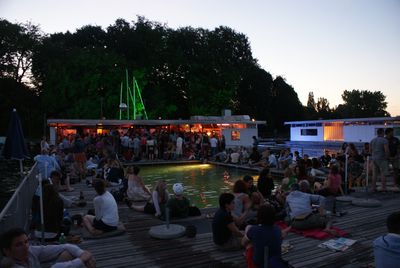 See you back in NYC! 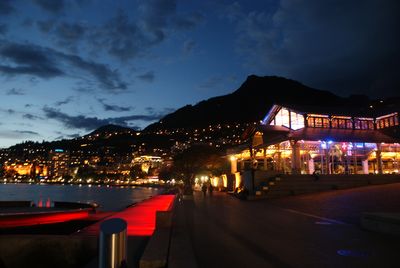 The Montreaux Quai ED-Jaccoud, with the old pavilion on the right. 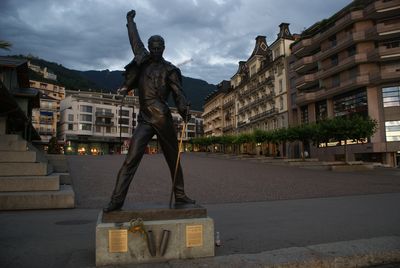 Freddie Mercury statue - longtime resident of Montreaux - on the Pl. du Marche, on the lakefront. 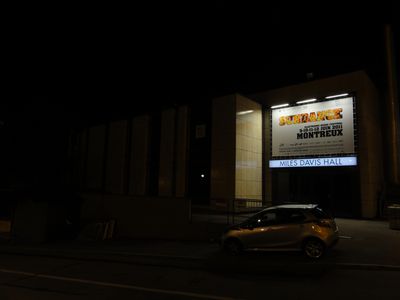