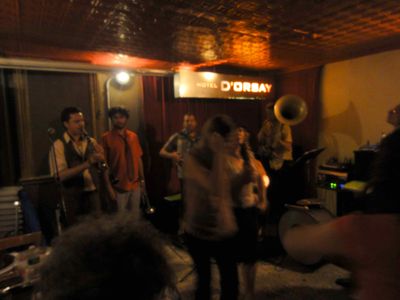 Kudos to my local Barbes, which not only stayed open in the face of Hurricane Tropical Storm Irene last night, but was one of the only bars I know that actually had live music, courtesy of the Raya Brass Band: yet another of the dozen-or-so Balkan bands spawned by Tuesday night regulars Slavic Soul Party. With noone rushing to leave into the torrential wind and rain, the band kept playing til well past midnight, intoxicating everyone with their seductive rhythms and elongated solos on trumpet (Ben Syversen), clarinet (Greg Squared) and accordion (Matthew Fass). Who says brass can't keep you warm?

Any other good shows out there in NYC last night? Post in the comments below.

More pics on the Photo page. 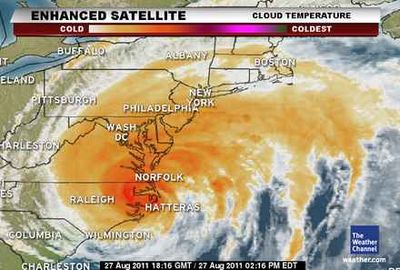 A little travel music for those of you in Zone A. In spite of the ominous specter of Irene, there are still plenty of inside musical events happening this weekend. Among them are the final concerts of this year's Mostly Mozart Festival, with Louis Langrée leading the MM Festival Orchestra tonight and tomorrow in an epic concert featuring Schubert's 8th Symphony, Stravinsky's In Memoriam Dylan Thomas, and Mozart's Requiem. Both shows begin at 8pm at Avery Fisher (which has never looked or sounded better, thanks to the temporary stage and canopy placed in front of the orchestra stage.)

A full recap of this year's Mostly Mozart soon to come. In the meantime, you can check out some photos here, here, and here.

Batten Down the Hatches 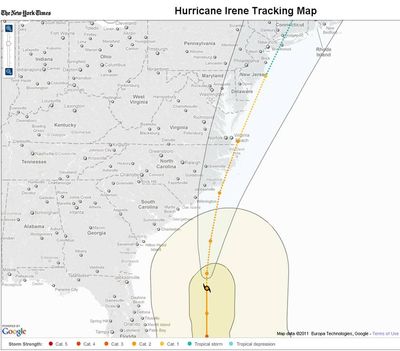 Among the numerous issues caused by Hurricane Irene's imminent arrival in NYC, Mayor Bloomberg has revoked some 300 permits for fairs and festivals scheduled throughout the city this weekend. Among the highly anticipated musical events affected are the 19th annual Charlie Parker Jazz Festival, the Dave Matthews Band on Governor's Island, and - most regrettably - the 7th annual Afro-Punk Festival in Fort Greene's Commodore Barry Park, which was to have featured Cee Lo Green, Santigold, Janelle Monae, Fishbone, Toro Y Moi, Das Racist, and many others. Damnit.

As of now, the Charlie Parker Fest is still happening tomorrow up in Marcus Garvey Park with Toots Thielmans, James Carter, Tia Fuller and Cécile McLorin Salvant: the music kicks off around 3pm. If you happen to be a Dave Matthews fan - well, I can't really help you with that.

Update: In case you haven't heard, the MTA is shutting down all public transportation at noon tomorrow, essentially putting an end to any musical plans this weekend, inside or outside. The city has also ordered the mandatory evacuation of all low-lying areas: see here to know whether or not your neighborhood is affected.