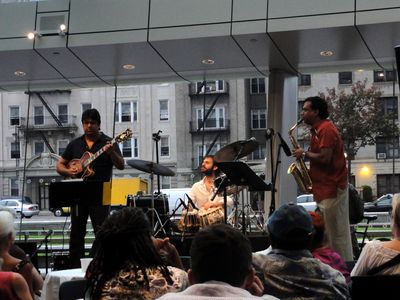 I didn't get to see Rudresh Mahanthappa's rad set with Bunky Green at Newport a couple of weeks ago - I left early Sunday after suffering enough of the wet weather - but from what I heard on the radio while driving back to NYC, he absolutely killed it.

So, when I heard Rudresh was appearing tonight at the Brooklyn Museum with his Indo-Pak Coalition- part of WBGO's ongoing BrooklyNites Jazz series - I hightailed it over. Apparently, I wasn't the only one who was excited that this particular gig was in Brooklyn.

"I can't tell you how great it is to be playing a show four blocks from my house," Rudresh said.

Rudresh, who won a Guggenheim Fellowship last year, played his alto with ferocious energy, fusing the raga-like rhythms of Indian classical music with ecstatic, high-flying jazz. Joining him were Rez Abassi on electric guitar and percussionist Dan Weiss, who switched seamlessly between tabla and a small drumkit. Everyone played like hell.

The trio played two sets, closing with "I.T.T." named after the India Institute of Technology, which is apparently so demanding and difficult to get into that it makes M.I.T. look like Arizona State. Over a machine-like meter, Rudresh blew like mad, his ideas flowing fast and furious. For all the consternation surrounding India's "brain drain" to the U.S., this is one particular intellect we should fight to keep. 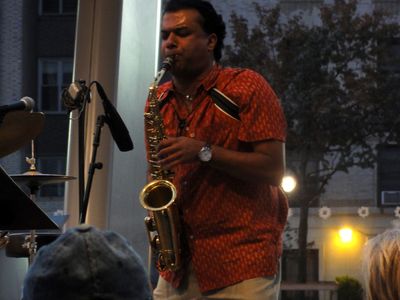 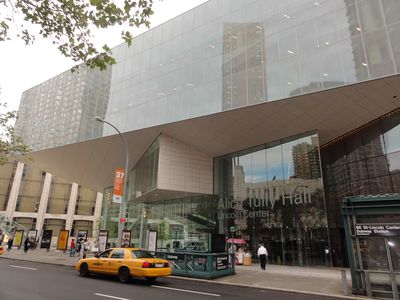 Believe it or not, Lincoln Center's Mostly Mozart is 45 years old this year. For most of that time, the festival was a largely forgettable exercise, the province of the old and infirmed seeking a not-too-taxing way to while away the last few weeks of summer. In other words, it was the embodiment of every bad cliche about classical music: polite, refined, borrrrrring.

Then, about a dozen years ago, L.C.'s VP of Programming Jane Moss - now well known to New Yorkers for last season's White Light and Tully Scope Festivals - took over the reins and started to shake things up. In addition to the resident Mostly Mozart Orchestra - a freelance orchestra of mostly local musicians - she brought in outside ensembles, added dance and opera performances, and - most controversially - radically decreased the amount of Mozart programmed.

"It seemed to me at the time," Jane says in a video on the MM website, "that the subject that is Mozart cried out for many different kinds of dimensions to a festival about him."

Another of Jane's innovations was to move nearly half of the MM concerts outside of Avery Fisher Hall: a oversized shoebox better suited for the music of Mahler or Messiaen than Mozart. Which is how I ended up at Alice Tully Hall Monday night for a concert by the Emerson String Quartet: the celebrated ensemble now in it's 35th year, whose pristine interpretations of the Classical and Romantic repertoire are second to none. 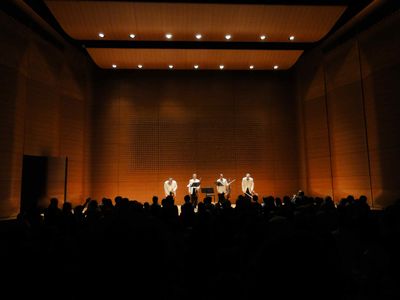 The Emerson paid respect to the festival's marquee composer with a performance of his final quartet, the so-called "Prussian" Quartet in D minor, K.590. Unfortunately, I never heard it, as they played it as part of a pre-concert recital, and the L.C. security guards wouldn't even let me in to hear it on the monitor. (Speaking of which, does it make sense to have a "pre-concert recital" if the concert itself is comprised solely of string quartets?)

The main concert, comprised of the final quartets of three later composers, stuck to more familiar territory for the Emerson. Haydn's unfinished Quartet in D minor (1803) was little more than a puff pastry, lasting all of 10 minutes. While you could hear a bit of Beethoven-like dissonance creeping in here and there, it was almost impossible to tell that this trifle had come from the same pen that had already written The Creation and The Seasons.

Far more challenging was Bartok's haunting 6th Quartet (1939), written in Budapest just as the spectre of war was falling across Europe and as Bartok himself was preparing to decamp to New York. Remarkably, the Emerson played this fiendishly difficult quartet - filled with quarter-tones, off-kilter rhythms, and intricate pizzicato - as if they were falling off a log. As well they should: it's been in their repertoire since their landmark recording of the complete Bartok quartets in 1990. Perhaps the only thing more extraordinary than the Emerson's effortless execution was the audience's rapt attention: this is harsh, fractured music intended to disturb, not soothe. Hardly the sort of thing you'd expect to hear on a festival dedicated to Mozart, but then again, this is the same festival that had Pierre-Laurent Aimard juxtaposing Mozart with Stockhausen and Ligeti back in 2009.

Whatever empty seats remained before intermission filled in for Schubert's Quartet in G major, D. 887. (The concert's 7:30 start time no doubt threw off more than a few concertgoers, though presumably they at least got to hear the concert in the lobby.) Schubert was only 29 when he composed this, his 15th and final quartet; he died less than two years later. Unfolding gradually over the better part of an hour, the music is marked by insistent reptetitions, frequent agitations, and long, limpid stretches where nothing much seems to happen. I've never paid much heed to this particular quartet - Schubert's previous quartet, the so-called "Death and the Maiden," tends to grab all the attention - but the Emerson made a compelling case for it, with an impassioned, heartfelt performance that was absolutely sincere. And sublime. 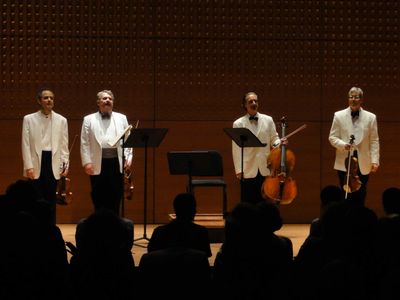 After a sustained ovation, the Emerson played one of Dvorák 12 Cypresses, "I'm sure, and hope sustains me" as an encore: it was pretty, but subdued for an encore, and I couldn't help thinking they had a 2nd encore on their stands they never had a chance to play. Welcome to New York.

I'll be back at Mostly Mozart tonight and Friday for performances by the Festival Orchestra in Avery Fisher, as well as Saturday for a performance by the Mark Morris Dance Group. Of the eight pieces to be performed, exactly two belongs to Mozart. Not that that's a bad thing. Tickets available at the box office or online. More pics on the photo page. The John Hollenbeck Large Ensemble on the Quad Stage at the 2011 Newport Jazz Festival, 8/7/11. More pics on the photo page. Wynton Marsalis Quintet on the Fort Stage at the 2011 Newport Jazz Festival. More pics on the photo page.