Around the Corner Radiohead 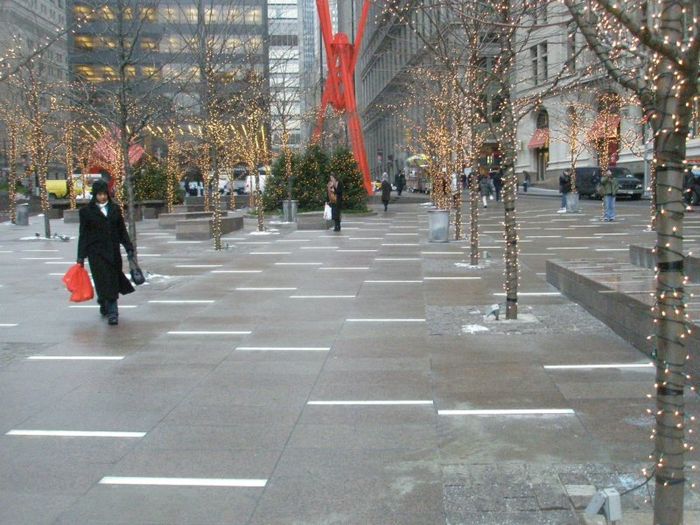 For all those who couldn't get into Roseland these past two nights, there's a rumor floating around that Radiohead is playing an acoustic set this afternoon at Zucotti Park this afternoon at 4p, to support the Occupy Wall Street movement. Radiohead's spokesman officially denies it, but an Occupy Wall Street spokesman insists that it's still on. "What we think is happening is they don't want a lot of people to come," he said. "Trust me, we have confirmation."

Good news is that I work two blocks from there, so I'll go check it out regardless. Fingers crossed.

(P.S. It never happened. But, the protest itself clearly doesn't need the help of Thom and the boys: go here for pics from yesterday.) 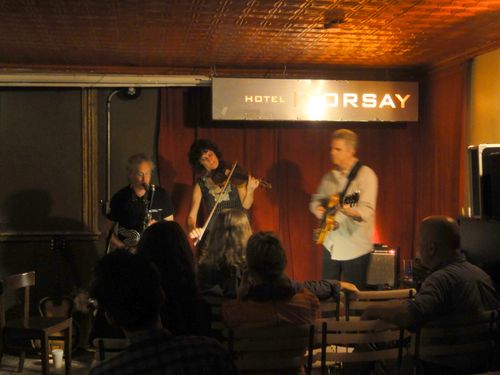 For the past 8 years, two acts have steadily held court at Barbes on Tuesday nights, making the corner of 6th Ave and 9th Street home to one of the great nights of music anywhere in NYC. The early slot (7p) belongs to the violinist/composer Jenny Scheinman, who these days can be found playing hifalutin places like the Village Vanguard. Last night, she appeared with clarinetist Doug Wieselman and guitarist Steve Cardenes, playing a few covers but mostly originals from her wide-ranging catalog, blending jazz with folk and old time music. At close range, she is a disarming, magnetic presence. 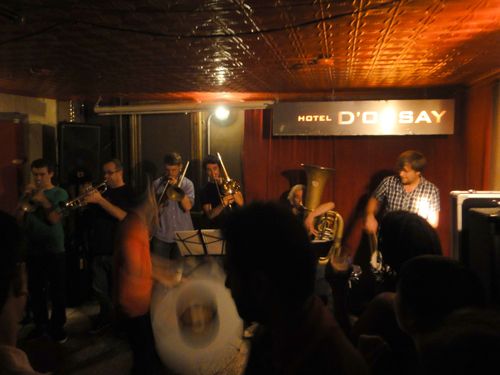 Following Jenny is Slavic Soul Party (9p), the 9-member brass band whose unique sound blends New Orleans jazz with the intoxicating rhythms of the Balkans. As always, they had the crowd of a half-dozen tongues swaying back and forth to their mesmerizing music, just like the snake charmer does to the proverbial cobra.

You've got one more chance to see Jenny at Barbes this year: on Oct 11 with singer Rachelle Garniez. (Her Vanguard run with Bill Frisell is Dec. 6-12.) Slavic Soul Party will be at Barbes forever - or, at the very least, for the foreseeable future. See you all out here sometime. 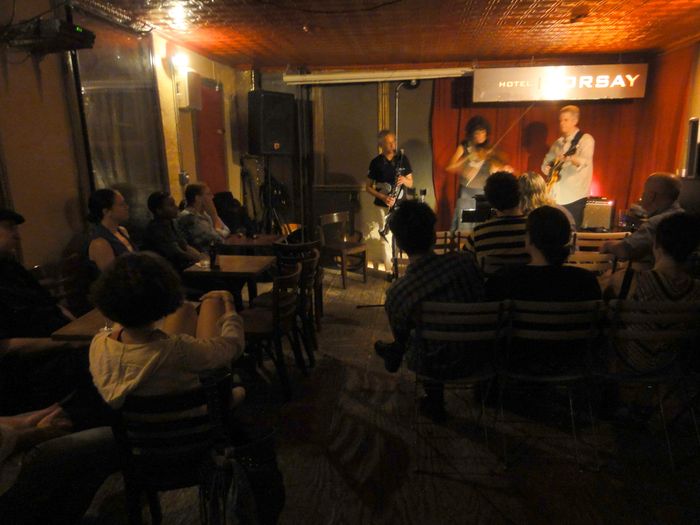 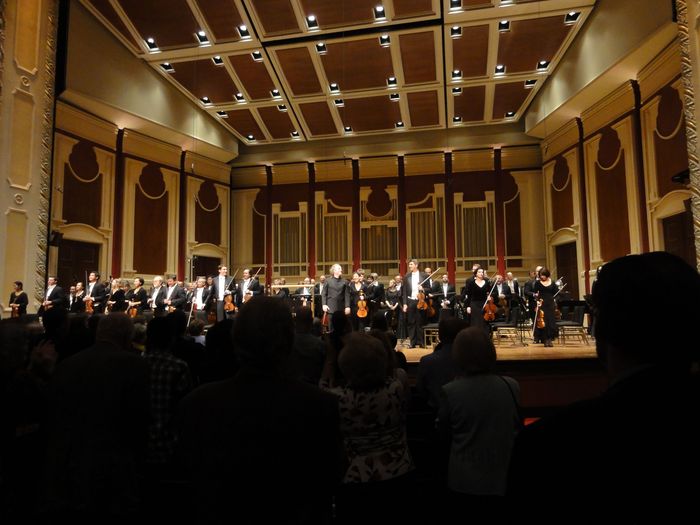 Speaking of Pittsburgh, I couldn't very well leave town this weekend without paying a visit to the Pittsburgh Symphony Orchestra, which I've seen on numerous previous occasions, both here and in New York. The last time I saw them was in 2010, during Manfred Honeck's second season as Music Director. Honeck, a former violinsit in the Vienna Philharmonic, is alsothe Music Director of the Stuttgart Opera and Principal Guest Conductor of the Czech Philharmonic (with whom I saw him conduct during the Mozart 250th birthday celebrations in 2006.)

There have been a number of changes at the PSO since my last visit, most visibly the departure of longtime concertmaster Andres Cardenes; he's been replaced by the young Noah Bendix-Balgley. But, perhaps the most sweeping development took place earlier this year, when the orchestra's musicians announced they would accept a 10% pay cut, a salary freeze next season, and changes to their pension plans. To his credit, Honeck volunteered to accept a similar wage reduction, though he's still making more than five times as much as the first chair players.

Pittsburgh is hardly the only orchestra to have gone through this in recent seasons. When faced with salary cuts, Detroit suffered through a 26 week stike last season, and the Cleveland Orchestra briefly went on strike two seasons ago. The Philadelphia Orchestra was able to rewrite the musicians' pension plans after they filed Chapter 11 earlier this year. All these woes can be tied back to two central factors: a drop in discretionary revenue as wealthy patrons reduce their contributions, and a persistent decline in ticket sales. Indeed, from my vantage point in the orchestra on Saturday night, I could see lots of open seats.

With all of these reductions comes the risk of declining musicianship, as it becomes harder and harder to attract top-tier musicians, not to mention keep the capable musicians you already have. But, from the rave reviews the orchestra garnered during their recent tour of several major European festivals, I was hopeful that PSO's sound quality would remain intact. (Their performance of Mahler's 5th Symphony at the Philharmonie on 9/11 - which is available online - was nothing short of remarkable.)

Saturday's program was fairly cookie-cutter in format: short contemporary piece, concerto, orchestral work. The contemporary work was contributed by the Pulitzer Prize-winning composer Steven Stucky, who has been a conspicuous presence on orchestra stages in recent years, thanks to his 20-year association with the LA Phil and the Hear and Now series he hosted with the NY Phil from 2005 to 2009. This season, he's the PSO's Composer of the Year, with no fewer than five of his compositions - including a new commission - to be performed throughout the season.

Stucky's Dreamwaltzes, written for the Minnesota Orchestra's Sommerfest series in 1986, was a 15 minute fantasy, interspersing waltzes and other styles from 19th century Vienna with jarring modernist strokes. Similar on the surface to Maurice Ravel's La Valse in its grotesque disintegration, Dreamwaltzes felt more like a pastiche, lacking any true motivic development. Still, its rich palette of sounds left us with a lot to chew on.

Austrian pianist Rudolf Buchbinder is one of the leading exponents of the core Viennese repertoire, so it was a bit surprising to see him here performing Gershwin's showy Concerto in F, which I've now heard three times in the past year. Written when Gershwin was 27, it's a far less jazzy piece than the more famous Rhapsody in Blue, which has lkely contibuted to it's more marginal status in the repertoire: if we want to hear a classical concerto, we'll turn to Beethoven or Brahms.

Still, it was a noble first attempt for a composer accustomed to writing for Broadway, and Buchbinder played it with flawless precision. Unfortunately, both he and the orchestra were also a bit stiff, lacking the swinging verve we crave in Gershwin. Things went far better in the ripping final movement, on which Honeck and the PSO stamped a massive final hit.(Buchbinder's encore, a transcription of Strauss' Fledermaus Waltz, had him flying across the keyboard with stunning virtuosity.)

Modest Mussorgsky is credited as the composer - rightly so - of Pictures at an Exhibition: one of the true warhorses of the repertoire. But, it was Ravel who took Mussorgsky's ten pieces for solo piano and gave them a new life as the dynamic orchestral suite we know today. Sadly, he barely warrants a mention in most program notes.

At this stage of it's life, it's almost impossible to say anything new about Pictures, but Honeck drew a rich, vibrant performance from the orchestra, playing up the spookiness of "The Old Castle" and the spriteliness of the "Ballet of Chicks in Their Shells." With the majestic "The Great Gate of Kiev" that concludes the suite, the PSO rang out with gongs and chimes that filled Heinz Hall, ending with another impressive roar that sent everyone leaping out of their seats in a chorus of bravos.

Great music can't be made without money, but moments like these hopefully serve to remind the beleagured players of this and other American orchestras that dollars aren't the only form of compensation they receive. Fulfillment, satisfcation, the opportunity to enlighten and inspire: these are benefits few of us will ever see in our day jobs. The least we can do is to show up: we'll all be richer for it. 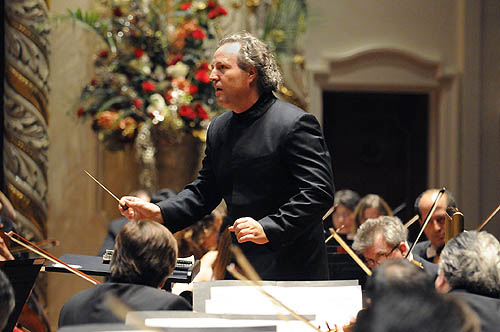