After over 40 years of touring, Blood Sweat & Tears still sets the standard that all other horn bands are judged by Starting out in Greenwich Village, BS&T was the first band to successfully combine rock with jazz, bringing their unique sound everywhere from Woodstock to behind the Iron Curtain.

On December 10, BS&T is coming to NYC to play two surprisingly intimate shows at City Winery. The late show is sold out, but tickets are still available for the 7pm show, either at the box office or online. 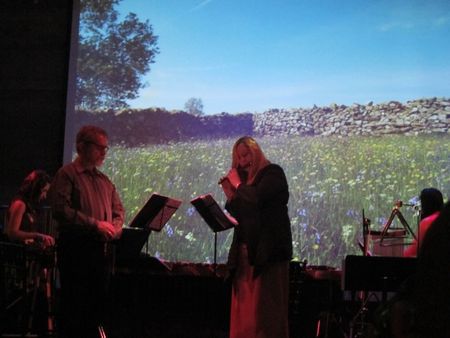 Who knew you could feel immersed in nature at a Brooklyn club? The five percussionists and six piccolo players of Le Train Bleu accomplished just that at Galapagos on Saturday with a performance of  John Luther Adams' “songbirdsongs” (1974-1980).  Many have spoken of Adams’ affinity for minimalism, but in reality, his rich, organic music fills spaces both small and large (see last summer's performance of “Inuksuit” in Morningside Park).

"songbirdsongs" consists of nine discrete movements which flow together, lasting just under an hour. In this performance, each song was accompanied by visuals of nature scenes projected both on the back of the stage and above the seating area. The music was calm and atmospheric, save for the penultimate movement, which was accompanied by a loud bass drum at the rear of the room, kettle drums and clappers onstage, and piccolos wildly chirping from all three sides of the balcony.

The final movement brought gentleness back to the fore, with a violin in the center of the room that conjured a shimmering winter scene, along with with bowed cymbals, kalimba, and chimes, signifying yet another cycle of nature’s seasons completed.

"Other film-makers might have found their creative impetus in novels or plays; Russell's inspiration was surely primarily in music. His ideas, his images, his rows, his career itself were all one colossal, chaotic rhapsody." - Peter Bradshaw, The Guardian

Ken Russell, one of the most innovative, bizarre, and controversial directors in film history, died yesterday at his home in the UK. He was 84. Just last summer, Russell was in New York to present nine of his films - several of which had never been screened here before - during the Film Society of Lincoln Center's "Russellmania!" retrospective.

Among his many various obsessions, Russell had a keen interest in classical music: early in his career, Russell directed BBC documentaries on composers as diverse as Prokofiev, Debussy and Edward Elgar. Later on, he migrated to feature-length films that  took considerable liberties with the lives of composeres such as Tchiakovsky ("The Music Lovers”) Mahler, (“Mahler”) and Liszt (“Lisztomania”), all of which he saw as his way of making high culture accessible to a popular audience.

In addition to classical music, Russell also was fascinated by the glam rock world of the 70's, as demonstrated by his most popular film, Tommy (1975), based on The Who's rock opera of the same name. The film, which starred a who's who of 70's musicians - including all four members of The Who, Ann-Margret, Elton John, Tina Turner, and Eric Clapton - was a box-office smash, playing to full movie houses for over a year.

Whether he'll be remembered as a visionary or a mere curiosity, Russell's love for music and musicians was unequivocal. If nothing else, anyone that's ever experienced one of his films will never quite hear - or see - this music the same way again.

More clips of Russell's films below.